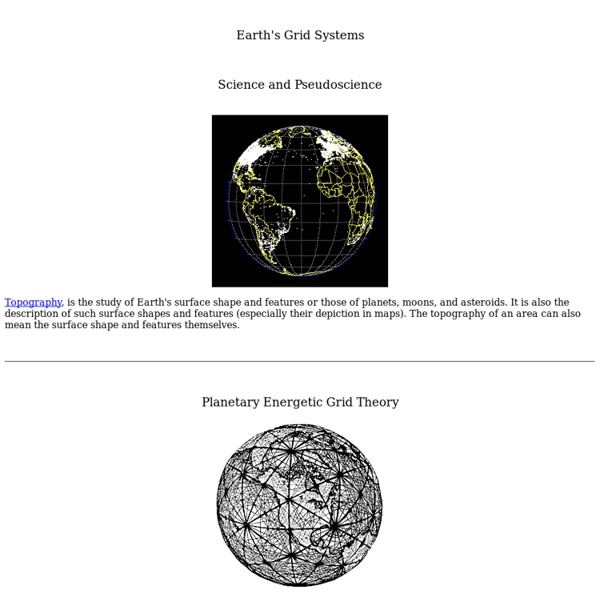 Earth's Grid Systems Science and Pseudoscience Topography, is the study of Earth's surface shape and features or those of planets, moons, and asteroids. It is also the description of such surface shapes and features (especially their depiction in maps). The topography of an area can also mean the surface shape and features themselves. Planetary Energetic Grid Theory Planetary Energetic Grid Theory falls under the heading of pseudoscience. Plato recognized grids and their patterns, devising a theory that the Earth's basic structure evolved from a simple geometric shapes to more complex ones. Becker-Hagens Grid Bill Becker and Bethe Hagens discussed the code of the Platonic Solids' positions on Earth, ascribing this discovery to the work of Ivan P. Becker and Hagens' attention was drawn to this research through the work of Chris Bird, who punished "Planetary Grid" in the New Age Journal in May 1975. South America's grid triangle forms the continent around itself. We see Dr. According to Dr. Related:  Miscellaneous stuff 3 • Alternative History

Why Time Slows Down When We’re Afraid, Speeds Up as We Age, and Gets Warped on Vacation by Maria Popova “Time perception matters because it is the experience of time that roots us in our mental reality.” Given my soft spot for famous diaries, it should come as no surprise that I keep one myself. That’s precisely what acclaimed BBC broadcaster and psychology writer Claudia Hammond explores in Time Warped: Unlocking the Mysteries of Time Perception (public library) — a fascinating foray into the idea that our experience of time is actively created by our own minds and how these sensations of what neuroscientists and psychologists call “mind time” are created. We construct the experience of time in our minds, so it follows that we are able to change the elements we find troubling — whether it’s trying to stop the years racing past, or speeding up time when we’re stuck in a queue, trying to live more in the present, or working out how long ago we last saw our old friends. And yet the brain does keep track of time, even if inaccurately. Donating = Loving Share on Tumblr

Mapping The World Grid MAPPING THE WORLD GRID by David Hatcher Childress What is the World Grid? How can it be it mapped? What does it do? Why should we be concerned about it? What does it have to with anti-gravity? In my many travels around the world in search of lost cities and ancient mysteries I have often wondered if there was some link connecting many of the ancient megalithic sites. Are megalithic sites laid out on a grid? In other words, we are speaking about an intelligent geometric pattern into which, theoretically, the Earth and its energies are organized - and possibly in which the ubiquitous ancient megalithic sites are also positioned. What we are speaking of is fundamentally different from longitudinal and latitudinal lines that we are so familiar with from conventional geography. However the familiar image of the Earth as a globe girded in a lattice of longitude and latitude lines helps us understand what an Earth Grid, based on more primary energy lines, might be like. Planetary Grid R. S.

Bethe Hagens - 1975 - Planetary Grid by Chris Bird PLANETARY GRID by CHRIS BIRD 1975 - Planetary Grid written by Chris Bird That our Earth and all matter upon it, whether held to be "living" or "non-living," is but the final result of a transformation of energy has long been suspected by metaphysicians and, comparatively recently, been given support by various branches of contemporary science with physics in the van. How this energy is ordered or regulated to form matter is a fascinating question to which only a small minority has addressed themselves. Since World War II, a number of theories, some based on a host of careful observations if not strict experimental proof, have been appearing on the horizons of scientific thought which suggest that the old "aether" of ancient philosophy, tribal wisdom and turn-of-the-century physical science may not be as dead as relativistic physics seems to have proclaimed it. But what of the structure of the unseen universe itself? When they showed their grid system to a geologist, V.I.

Global Issues : social, political, economic and environmental issues that affect us all Train Your Brain To Let Go Of Habits – 10 Methods For Creating New Neural Pathways When you understand how neural pathways are created in the brain, you get a front row seat for truly comprehending how to let go of habits. Neural pathways are like superhighways of nerve cells that transmit messages. You travel over the superhighway many times, and the pathway becomes more and more solid. I used to drive with one foot on the brake and the other on the accelerator, and I wanted to train myself to drive with one foot only. Because of neuroplasticity, the brain’s ever-changing potentials, anything is possible. Whether you work with others on their habits or you work with your own (or both), you can apply these understandings to boost your success. Some Powerful Ways to Retrain the Brain 1. You may remember the punch line “The light bulb has to want to change.” 2. Look at feelings, thoughts, and how the body is responding to the habit, and see what results you’re creating in your life. 3. This is very important. 4. 5. 6. This isn’t everyone’s cup of tea. 7. 8. 9. 10.

Strange Artifacts, The Stone Spheres of Costa Rica Introduction One of the strangest mysteries in archaeology was discovered in the Diquis Delta of Costa Rica. Since the 1930s, hundreds of stone balls have been documented, ranging in size from a few centimetres to over two meters in diameter. Some weigh 16 tons. Almost all of them are made of granodiorite, a hard, igneous stone. Balls in the Courtyard of National Museum, San José, Costa Rica. The spheres number over 300. The stones may have come from the bed of the , to where they were transported by natural processes from sources of parent material in the Talamanca mountains. Debunking the "Mystery" of the Stone Balls by John W. The stone balls of Costa Rica have been the object of pseudoscientific speculations since the publication of Erich von Däniken's Chariots of the Gods in 1971. Hundreds of stone balls have been documented in Costa Rica, ranging in size from a few centimeters to over two meters in diameter. The balls have been endangered since the moment of their discovery. Books