The Science of Lucid Dreaming and How to Learn to Control Your Dreams, Animated 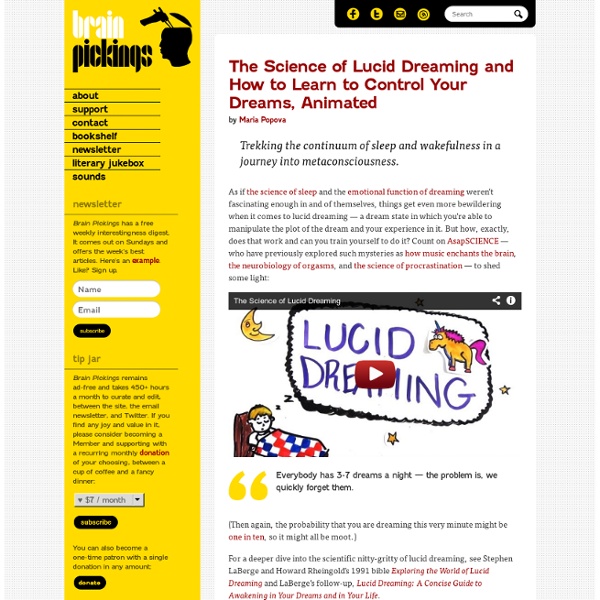 by Maria Popova Trekking the continuum of sleep and wakefulness in a journey into metaconsciousness. As if the science of sleep and the emotional function of dreaming weren’t fascinating enough in and of themselves, things get even more bewildering when it comes to lucid dreaming — a dream state in which you’re able to manipulate the plot of the dream and your experience in it. But how, exactly, does that work and can you train yourself to do it? Count on AsapSCIENCE — who have previously explored such mysteries as how music enchants the brain, the neurobiology of orgasms, and the science of procrastination — to shed some light: Everybody has 3-7 dreams a night — the problem is, we quickly forget them. (Then again, the probability that you are dreaming this very minute might be one in ten, so it might all be moot.) Then, treat yourself to this fantastic and mind-bending Radiolab episode about how one man cured himself of a recurring nightmare by learning lucid dreaming: Donating = Loving

READY TO HIT THE WEB: First 3D-Printed Handgun Successfully Test Fired « Secrets of the Fed This is an update to Defense Distributed’s ongoing progress with 3D printed weapons. The eyes of the world are on the innovation of 3D printing. Naturally, whenever a new technology is created that offers open source DIY opportunities to the average individual, it is going to make governments and their protected corporate interests very nervous. Such is the case with 3D weapons manufacturing. Defense Distributed has been offering sets of computer files for free through their DEFCAD online library. Their progress has been documented on their own site by a series of video updates the company has posted.

9 Things You Probably Didn’t Know About Dreaming There’s a lot we still don’t understand when it comes to sleep. We know certain changes occur in the brain, and we have a few guesses as to why, but even the experts only have theories about many aspects of sleep in general and dreaming in particular. Sleep has long been thought of as a way to process, sort and store the day’s events, and more and more research is supporting that notion. Lasting Relationships Rely On 2 Traits Gottman wanted to know more about how the masters created that culture of love and intimacy, and how the disasters squashed it. In a follow-up study in 1990, he designed a lab on the University of Washington campus to look like a beautiful bed-and-breakfast retreat. He invited 130 newlywed couples to spend the day at this retreat and watched them as they did what couples normally do on vacation: cook, clean, listen to music, eat, chat, and hang out. And Gottman made a crucial discovery in this study—one that gets at the heart of why some relationships thrive while others languish. Throughout the day, partners would make requests for connection, what Gottman calls “bids.”

The Role of Intuition and Imagination in Scientific Discovery and Creativity: A 1957 Guide by Maria Popova “Those who do not know the torment of the unknown cannot have the joy of discovery.” Last week, we took in some timeless vintage wisdom on the role of serendipity and chance-opportunism in creativity and scientific discovery, culled from the 1957 gem The Art of Scientific Investigation (public library; public domain) by Cambridge University animal pathology professor W. I. 5 Ways Sleeping Naked Can Benefit You It appears that sleeping naked is not only sexy, but is also beneficial for one’s health. Here are five surprising (and scientifically confirmed) ways sleeping in your birthday suit can benefit your health and well-being: Better quality of sleep An Australian study concluded that some forms of insomnia can be provoked by improper body temperature regulation at night. Another study showed that the regulation of in-bed body temperature could significantly help in reaching a deeper sleep. In one study in particular, Dutch scientists placed thermosuits on participants in order to lower their skin temperature without affecting core body temperature.

How Much Sleep Do You Really Need? We spend about 24 years of our lives sleeping, yet the exact function of sleep is still being debated by scientists. In experiments, researchers monitored three groups of participants who slept 4, 6, or 8 hours a night over an extended amount of time. After just two weeks, the group who slept 6 hours had a similar reaction time as a person whose blood alcohol concentration was 0.1 percent. Those who slept 4 hours would fall asleep during their cognitive tests. Here's the video from AsapSCIENCE. People who consistently sleep less than 7 to 8 hours a night may suffer cognitive issues. Future - How human culture influences our genetics You shouldn't be able to drink milk. Your ancestors couldn't. It is only in the last 9,000 years that human adults have gained that ability without becoming ill.

Master of Engineering Management (M.E.M.) The Master of Engineering Management (M.E.M.) program is a professional degree program. M.E.M. engineering and management courses are taught by faculty from Thayer School and Tuck School of Business. The combination of small classes and a high faculty-to-student ratio fosters class spirit and creates a stimulating intellectual environment. The mission of Thayer School's M.E.M. program is to develop managers who understand both the engineering and business aspects of technology. CDC calls insufficient sleep a public health epidemic: Learn to sleep like a baby (NaturalNews) The CDC has it right in declaring lack of sleep a public health epidemic. Lack of sleep has been linked to a number of public issues such as industrial disasters, medical and occupational errors, and motor vehicle accidents. In addition to these well-known consequences, however, new studies have shown that people who receive insufficient sleep are at increased risk for chronic disease such as diabetes, hypertension, obesity, and even cancer. Research backs the call for better sleep with shocking statistics

Hive minds: Time to drop the fiction of individuality - opinion - 08 April 2014 FOR most of Western history, truth and morality came from God and king, and free will was a theological question. This began to change in the 1700s, and the idea that humans were individuals with the freedom of rational choice soon wormed its way into the belief systems of the upper echelons of society. Over time, the concepts of rationality and individualism profoundly shaped the governments and culture of the West. Biological Psychiatry - Is attention-deficit/hyperactivity disorder an energy deficiency syndrome? Abstract Attention-deficit/hyperactivity disorder (ADHD) is a highly heritable yet clinically heterogeneous syndrome associated with hypocatecholamine function in subcortical and prefrontal cortical regions and clinical response to medications that enhance catecholamine function. The goal of this article is to present a hypothesis about the etiology of ADHD by synthesizing these findings with recent experiments indicating that activity-dependent neuronal energy consumption is regulated by cortical astrocytes. The scientific literature was searched from 1966 to the present using MEDLINE and relevant key words. Inattention and impulsivity may be related to hypofunctionality of catecholamine projection pathways to prefrontal cortical areas, resulting in decreased neuronal energy availability.

Lucid Dreamers Produce The Fastest Brainwave Frequencies Ever Recorded Lucid dreaming is one category of dreams that many people experience. It occurs when the individual is dreaming and during that dream the individual is completely aware that they are dreaming. Some people report a low-level lucidity state where one is aware they are dreaming but not able to alter the content of the dream. Other people have experienced high-level lucidity where one is aware they are dreaming but are also able to alter the dream, and have the freedom to do whatever they desire within the dream. Dreams are a fascinating phenomenon as they provide us with insights into a world full of experiences we cannot perceive or create in a completely conscious state, or can we?