Nutritional science starter pack : starterpacks. Inventing Conflicts of Interest: A History of Tobacco Industry Tactics. Science journalism can be evidence-based, compelling — and wrong. Many science journalists rely on peer review to check their stories are true. 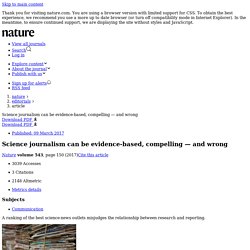 There has been much gnashing of teeth in the science-journalism community this week, with the release of an infographic that claims to rate the best and worst sites for scientific news. According to the American Council on Science and Health, which helped to prepare the ranking, the field is in a shoddy state. “If journalism as a whole is bad (and it is),” says the council, “science journalism is even worse. Not only is it susceptible to the same sorts of biases that afflict regular journalism, but it is uniquely vulnerable to outrageous sensationalism”. Science, Scientism, and Anti-Science in the Age of Preposterism.

Article Susan Haack Volume 21.6, November / December 1997 We are in danger of losing our grip on the concepts of truth, evidence, objectivity, disinterested inquiry. 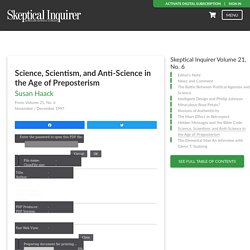 The preposterous environment in which academic work is presently conducted is inhospitable to genuine inquiry, hospitable to the sham and the fake. Encouraging both envy and resentment of the sciences, it has fed an increasingly widespread and articulate irrationalism. That is preposterous which puts the last first and the first last. . . . Spurious Correlations.

Spurious correlations: Margarine linked to divorce? 25 May 2014Last updated at 19:14 ET By James Fletcher BBC News A website set up by a student at Harvard teaches us to look carefully at statistics. 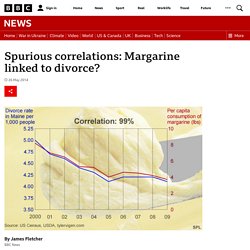 And it's fun at the same time. "Margarine consumption linked to divorce. " If you saw that headline on a newspaper or website, what would you think? What if you read a little further and found a compelling graph showing the rates of divorce and margarine consumption tracking each other closely over almost 10 years. Tempted to believe there could be a link? "Maybe when there's more margarine in the house it's more likely to cause divorce," muses Tyler Vigen, "or there's a link with some of the molecules in margarine or something. " Science Compared Every Diet, and the Winner Is Real Food - James Hamblin. Researchers asked if one diet could be crowned best in terms of health outcomes. 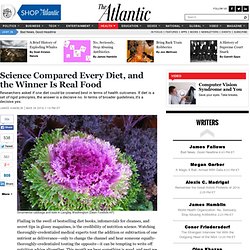 If diet is a set of rigid principles, the answer is a decisive no. In terms of broader guidelines, it's a decisive yes. Ornamental cabbage and kale in Langley, Washington (Dean Fosdick/AP) Flailing in the swell of bestselling diet books, infomercials for cleanses, and secret tips in glossy magazines, is the credibility of nutrition science. Watching thoroughly-credentialed medical experts tout the addition or subtraction of one nutrient as deliverance—only to change the channel and hear someone equally-thoroughly-credentialed touting the opposite—it can be tempting to write off nutrition advice altogether. That notion is at once relatable and tragic, in that diet is inextricable from the amount of healthy time we spend on Earth. Many authors of psychiatry bible have industry ties - health - 13 March 2012. Just as many authors of the new psychiatry "bible" are tied to the drugs industry as those who worked on the previous version, a study has found, despite new transparency rules. 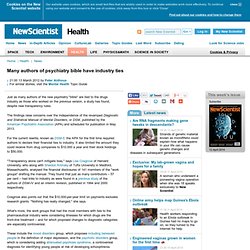 The findings raise concerns over the independence of the revamped Diagnostic and Statistical Manual of Mental Disorders, or DSM, published by the American Psychiatric Association (APA) and scheduled for publication in May 2013. For the current rewrite, known as DSM-5, the APA for the first time required authors to declare their financial ties to industry. It also limited the amount they could receive from drug companies to $10,000 a year and their stock holdings to $50,000. "Transparency alone can't mitigate bias," says Lisa Cosgrove of Harvard University, who along with Sheldon Krimsky of Tufts University in Medford, Massachusetts, analysed the financial disclosures of 141 members of the "work groups" drafting the manual. Journal reference: PLoS Medicine, DOI: 10.1371/ journal.pmed.1001190 More From New Scientist.

Michio Kaku on the moon landing "hoax". John Pike, Pepper-Spraying Cop, Seeks Workers Comp From UC Davis. DAVIS, Calif. -- The former police officer who pepper-sprayed students during an Occupy protest at the University of California, Davis is appealing for worker's compensation, claiming he suffered psychiatric injury from the 2011 confrontation. 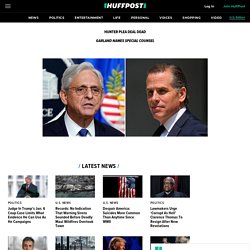 John Pike has a settlement conference set for Aug. 13 in Sacramento, according to the state Department of Industrial Relations' website. Pike was fired in July 2012, eight months after a task force investigation found that his action was unwarranted. Online videos of him and another officer casually dousing demonstrators with pepper spray went viral, sparking outrage at UC Davis leaders. The images became a rallying symbol for the Occupy Wall Street movement. Hackers posted Pike's information online. This week, a state appeals court ruled news organizations are entitled to know the names of a dozen University of California police officers who were interviewed about the use of pepper spray on demonstrators at UC Davis.