8 Foods Even The Experts Won’t Eat 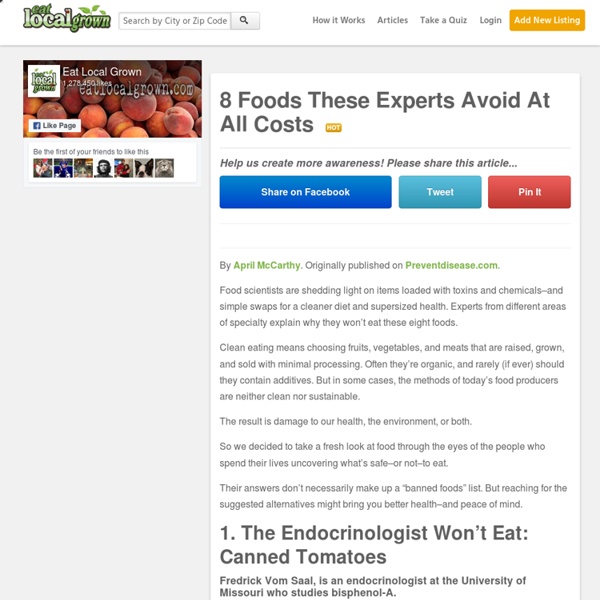 By April McCarthy. Originally published on Preventdisease.com. Food scientists are shedding light on items loaded with toxins and chemicals–and simple swaps for a cleaner diet and supersized health. Experts from different areas of specialty explain why they won’t eat these eight foods. Clean eating means choosing fruits, vegetables, and meats that are raised, grown, and sold with minimal processing. The result is damage to our health, the environment, or both. So we decided to take a fresh look at food through the eyes of the people who spend their lives uncovering what’s safe–or not–to eat. Their answers don’t necessarily make up a “banned foods” list. 1. Fredrick Vom Saal, is an endocrinologist at the University of Missouri who studies bisphenol-A. The problem: The resin linings of tin cans contain bisphenol-A, a synthetic estrogen that has been linked to ailments ranging from reproductive problems to heart disease, diabetes, and obesity. The solution: 2. 3. The solution: 4. The solution: 5.

11 Reasons Dehydration Is Making You Sick And Fat Adverse effects from not drinking enough water include digestive, skin, bladder and kidney problems, fatigue, and even headaches. We need water as much as the air we breathe in! Keeping your body hydrated is not a joke. Did you know that dehydration actually sets in just before you start feeling thirsty? Sipping water throughout the day is the best way to handle it. Always have a bottle or a glass of water handy! Many of us believe that merely drinking fluids like sweetened juices, soda or tea will hydrate you as well as water does. Drinking water regularly speeds up your metabolism and makes you feel more ‘full’. H/T: SDFJ.org, Memolition, whydontyoutrythis.com

6 Vegetables You Can Grow Again. And Again. And Again. And Again. No matter what season you find yourself in or headed towards, a jumpstart in growing time is always useful to keep your organic vegetable garden producing (that’s one reason transplants are so commonly utilized). Melissa Melton and Aaron Dykes demonstrate how easy it can be to regrow food scraps from their leftover organic produce. Throw whatever you decide not to regrow into your compost bin, and keep the organic matter recycling back into a healthy and productive soil – Learn more with this important book on soil health, compost, mulching and organic gardening in Texas (or anywhere). Kitchen Scraps You Can Regrow: 1. Spring Onions are a wonderful choice because they are so easy, grow back in full in about a week, spruce up window space and add flavor to any number of dishes and soups. 2. Celery can be regrown after the useful and nutritious stalks are juiced (our favorite), tossed into a salad or chopped into a stirfry. 3. Editors Note: Check out this Little Girl's Experiment on Budnip 4.

Why Are We So Fat? The Multimillion-Dollar Scientific Quest to Find Out | Magazine Adam Voorhes In January of this year, the first subject checked into the metabolic ward at the National Institutes of Health in Bethesda, Maryland, to participate in one of the most rigorous dietary studies ever devised. For eight weeks, he was forbidden to leave. He spent two days of each week inside tiny airtight rooms known as metabolic chambers, where scientists determined precisely how many calories he was burning by measuring changes in oxygen and carbon dioxide in the air. He received meals through vacuum-sealed portholes so that the researchers' breath wouldn't interfere with their measurements. The food itself had been chemically analyzed to ensure an exact number of carbohydrate, protein, and fat calories. The two-day stays in the chambers were only a small part of the testing, which was also being carried out on subjects at three other institutions around the US. NuSI's strategy is to bring the nation's top nutrition researchers together to find answers as a team. Gary Taubes

7 Ways to Trigger the Heart Field – The Most Powerful Healing Force There Is Every cause of disease first begins with an imbalance in the body’s energy systems, specifically, the interaction between how the heart communicates with the brain and the body. Fix that and there is no disease, ever. The heart can produce an electrical field 100 times greater than the brain and a magnetic field 5000 times greater. Which one are you using to heal? Emotions are vibrations which influence consistently our reality. We not only think and work our way through a day, meeting, assignment, but also feel and believe our way through it. Simply put, the number one cause of health is your energetic and emotional state. All the emotions are varieties of two: fear and love: Fear/stress is contagious and causes contraction: inhibits creativity, brain activity, inhibits the immune system,selective perception and over extensive periods of time leads to breakdown. The quality of the field one creates with his heart influences his experience and reality. 1. 2. 3. 4. 5. 6. 7.

This Is Your Brain on Fish Thicker, stronger, and more resilient. Once a week is all it takes, new research says. Alex Trautwig/Getty Have you ever considered undergoing brain-thickening surgery, only to find that such a thing does not exist? And that the guy in the van was probably not actually a surgeon? "Understanding the effects of fish consumption on brain structure is critical for the determination of modifiable factors that can decrease the risk of cognitive deficits and dementia," Raji and colleagues write. This study found that eating fish—baked or broiled, never fried—is associated with larger gray matter volumes in brain areas responsible for memory and cognition in healthy elderly people. "There wasn't one type of fish that was the best," Raji told me by phone, probably while eating fish. "If you eat fish just once a week, your hippocampus—the big memory and learning center—is 14 percent larger than in people who don't eat fish that frequently. 14 percent.

5,000 Year Old Buddhist Health Recipe Posted by El Barto | April 10, 2014 5,000 Year Old Buddhist Health Recipe This ancient recipe of a pharmacist was found in 1972 in a Buddhist monastery in the mountains of Tibet. It was dated to be 5,000 years old. Add 350 grams of crushed garlic in a glass jar. The alcohol may not contain other substances, like benzalkonium chloride or methanol. - See more at: Close the jar hermetically and place in the refrigerator for 10 days. In the 11th day filter it all with a very fine strainer or gauze. After this period, the remedy is ready for treatment (the drops may be taken with some milk or water before starting to eat), as follows: Continue with 25 drops/ 3 times a day, until you finish the entire quantity. And possibly the most important one: It absorbs any internal and external tumors! Source: humansarefree.com

Root vegetables 101: A primer on the most underappreciated produce Pity the poor root vegetable. Dirty, misshapen, they have none of the tantalizing sexiness of tomatoes, the trendiness of kale, the smooth beauty of eggplants. Nope, root vegetables look odd, and people have no idea what to do with them. On more than one occasion I have been accosted by someone in the grocery store wanting to know what the hairy, bulbous thing in my hand was. I live in Toronto and I cook locally and seasonally, so I have more than a passing acquaintance with all manner of root vegetables. Here's a little primer on root vegetables to get you started. Celeriac Also known as celery root, celeriac has a delicate celery taste. Fun fact: Celery is one of the first vegetables to appear in recorded history. Jerusalem artichokes Neither an artichoke, nor from Jerusalem, these are the tubers of sunflowers and probably derive their name from the Italian for sunflower, girolsole. Fun fact: Jerusalem artichokes contain the carbohydrate inulin (not insulin!) Parsnips Rutabaga Turnips

7 Surprising and Painless Ways to Boost Your Health Andresr/Shutterstock “C’mon, really?!” That was my first reaction when I read about some of the unexpected health boosters described below. Many sounded too good to be true or just plain improbable. But when I thought about them further, I had to admit that they made sense. Here they are: 1. 2. The results? 3. 4. 5. 6. 7. Of course, along with these surprising boosters, good health has to be built on a strong foundation of nutrition, exercise, sleep, supportive relationships, and other good habits like flossing and using sunscreen. What else out there is contributing to our good health—or robbing us of it—without us fully realizing it? (c) Meg Selig, 2014

Turnera diffusa Turnera diffusa, known as damiana, is a shrub native to southwestern Texas in the United States,[3] Central America, Mexico, South America, and the Caribbean. It belongs to the family Passifloraceae.[2] Damiana is a relatively small shrub that produces small, aromatic flowers. It blossoms in early to late summer and is followed by fruits that taste similar to figs. The shrub is said to have a strong spice-like odor somewhat like chamomile, due to the essential oils present in the plant.[4] The leaves have traditionally been made into a tea and an incense which was used by native people of Central and South America for its relaxing effects. Uses[edit] Damiana has long been claimed to have a stimulating effect on libido, and its use as an aphrodisiac has continued into modern times. Damiana might be effective as an anxiolytic.[9] Damiana is an ingredient in a traditional Mexican liqueur, which is sometimes used in lieu of Triple Sec in margaritas. Properties[edit] Legality[edit] USA[edit]

10 Reasons Why People Who Drink Tea Are Doing It Right If you’re looking for a drink stacked with health benefits this morning, save your money on that green juice and ginger shot you planned on buying. Boil some water and grab a bag of tea, instead. It’s been known for centuries that tea can provide us with certain health benefits, but what many Americans don’t take the time to actually learn is exactly what these benefits are. The battle between coffee and tea for breakfast beverage supremacy has been something of a lopsided war over the years. While coffee may contain an unrivaled amount of caffeine, tea might be the more sensible morning drink for you. So, if you’re trying to make the crossover from coffee to tea, I’ve attached 10 reasons why tea drinkers are healthier than the people who opt for the alternative. 1. Green tea is a stellar option at any time, given its array of different health benefits; however, if you’re looking to lose weight, green tea should definitely be stocked in your cabinet. 2. 3. 4. 5. 6. 7. 8. 9. 10.