Google Must Tell Apple Its Android Secrets, Says Judge. Google and Motorola were ordered by a judge on Monday to divulge data to Apple about their pending merger and the development of the Android mobile operating system. 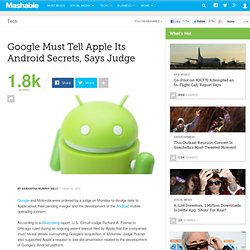 According to a Bloomberg report, U.S. Circuit Judge Richard A. Posner in Chicago ruled during an ongoing patent lawsuit filed by Apple that the companies must reveal details surrounding Google's acquisition of Motorola. Attorneys general have 'strong concerns' about Google privacy rules. Google says its new privacy policy is meant to be clearer to users and doesn't change privacy controls. 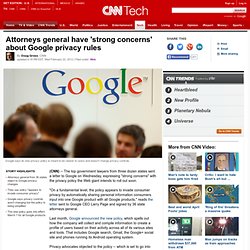 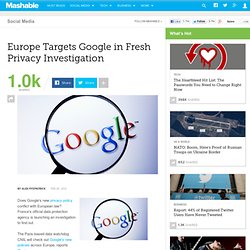 France's official data protection agency is launching an investigation to find out. The Paris-based data watchdog CNIL will check out Google's new policies across Europe, reports Reuters. The team of regulators will produce questions for the company by mid-March, according to a letter CNIL sent Google. "The CNIL and EU data authorities are deeply concerned about the combination of personal data across services," CNIL wrote to Google. "They have strong doubts about the lawfulness and fairness of such processing, and its compliance with European data protection legislation. " Google Caught Tracking Safari Users: What You Need to Know. Google is in a lot of hot water over recent revelations about how it tracks user activity on Apple devices — particularly iPhones and iPads. As reported by The Wall Street Journal, an independent researcher has discovered that Google embeds hidden software on many websites — software designed to circumvent the default settings on a web browser to record a user's behavior.

The issue involves how Safari, the default web browser on Apple devices, deals with cookies. Cookies, of course, are the little pieces of information (such as a user ID) that a website can leave on your phone, tablet or computer and later retrieve. Cookies allow you to log in to a website such as Flickr, and return without needing to log in again. Cookies also enable advertisers to track your behavior. Setting the Record Straight on Google’s Safari Tracking « Web Policy. Our recent research on Google’s circumvention of the Safari cookie blocking feature has led to some confusion, in part owing to the company’s statement in response (reproduced in its entirety below). 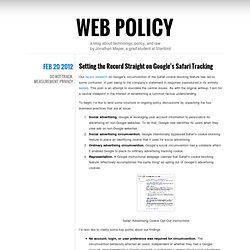 This post is an attempt to elucidate the central issues. As with the original writeup, I aim for a neutral viewpoint in the interest of establishing a common factual understanding. To begin, I’d like to lend some structure to ongoing policy discussions by unpacking the four business practices that are at issue. Social advertising. Google is leveraging user account information to personalize its advertising on non-Google websites. I’d next like to clarify some key points about our findings. No account, login, or user preference was required for circumvention. Google Wants a 2.25% Cut of Every iPhone Sale. Looking to earn back some of the $12.5 billion it's spending to buy Motorola Mobility, Google sent a letter to the Institute of Electrical and Electronics Engineers looking for a maximum 2.25% cut of sales for phones that use Motorola's technology, including Apple's iPhone. 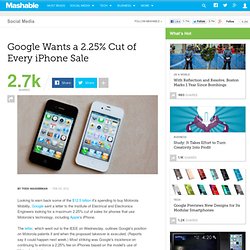 The letter, which went out to the IEEE on Wednesday, outlines Google's position on Motorola patents if and when the proposed takeover is executed. (Reports say it could happen next week.) Most striking was Google's insistence on continuing to enforce a 2.25% fee on iPhones based on the model's use of Motorola patents. Google's stance comes about two weeks after Motorola Mobility filed a lawsuit against Apple accusing the company of infringing on its technology patents. Motorola's complaint, filed in a Florida federal court, concerns patents for the iPhone 4S and Apple's iCloud service.

Facing Another PR Disaster: Google Accused Of Fraudulently Undermining A Kenyan Startup. Google, what were you thinking? 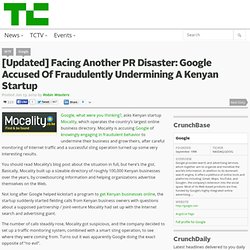 , asks Kenyan startup Mocality, which operates the country’s largest online business directory. Mocality is accusing Google of knowingly engaging in fraudulent behavior to undermine their business and grow theirs, after careful monitoring of Internet traffic and a successful sting operation turned up some very interesting results. You should read Mocality’s blog post about the situation in full, but here’s the gist. Basically, Mocality built up a sizeable directory of roughly 100,000 Kenyan businesses over the years, by crowdsourcing information and helping organizations advertise themselves on the Web. Not long after Google helped kickstart a program to get Kenyan businesses online, the startup suddenly started fielding calls from Kenyan business owners with questions about a supposed partnership / joint-venture Mocality had set up with the Internet search and advertising giant.

Serious stuff. Putting The Google-Is-Ripping-Off-A-Kenyan-Startup Story In Perspective. When you think about what Google, the 32,000-employee search engine conglomerate, is strategically focused on these days, here’s one thing that doesn’t come to mind: an initiative to get more Kenyan businesses online via manually grabbing data from a local startup that’s trying to do something complementary. 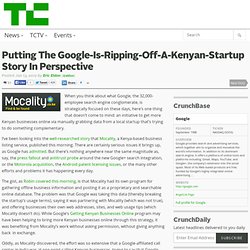 I’ve been looking into the well-researched story that Mocality, a Kenya-based business listing service, published this morning. There are certainly serious issues it brings up, as Google has admitted. But there’s nothing anywhere near the same magnitude as, say, the press fallout and antitrust probe around the new Google+ search integration, or the Motorola acquisition, the Android patent licensing issues, or the many other efforts and problems it has happening every day. The gist, as Robin covered this morning, is that Mocality had its own program for gathering offline business information and posting it as a proprietary and searchable online database.

Google: Sorry, Twitter, We Don't Index the @ Symbol. If you haven't noticed that Google+ pages are increasingly becoming a part of Google search results, you may have noticed Google and Twitter's increasingly public spat about it. 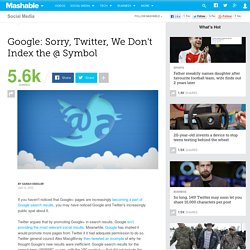 Twitter argues that by promoting Google+ in search results, Google isn't providing the most relevant social results. Meanwhile, Google has implied it would promote more pages from Twitter if it had adequate permission to do so. Twitter general council Alex Macgillivray then tweeted an example of why he thought Google's new results were inefficient: Google search results for the search term “@WWE” — yes, with the "@" symbol — that did not include the organization’s Twitter page. Now Google has confirmed to Mashable that it has never indexed the "@" symbol. In other words, the search engine has never recognized a Twitter handle when it was formatted that way. But really, Google? On the other hand, Twitter and Facebook haven't necessarily made it easy for the search engine to feature them in results. RIAA Flunks Google in Anti-Piracy Efforts. RIAA Slams Google's Anti-Piracy Efforts, Demands Even More Unreasonable Measures. The Recording Industry Association of America is mad. 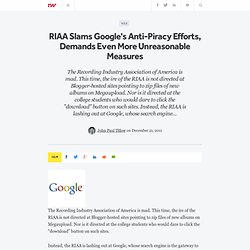 This time, the ire of the RIAA is not directed at Blogger-hosted sites pointing to zip files of new albums on Megaupload. Nor is it directed at the college students who would dare to click the "download" button on such sites. Instead, the RIAA is lashing out at Google, whose search engine is the gateway to the Web for hundreds of millions of people.

Over the last year or so, Google has been making it a bigger priority to discourage copyright infringement among people who use its various Web services. Those measures, the RIAA has argued, are not enough.