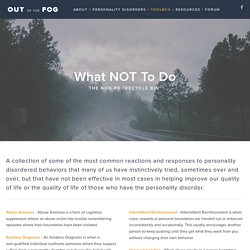 This usually encourages another person to keep pushing until they get what they want from you without changing their own behavior. Abuse Tears Families Apart: A Sister Mourns the Loss of Her Brother. Being in an abusive relationship doesn’t just hurt the target of abuse, it hurts everyone who cares about and loves the target. 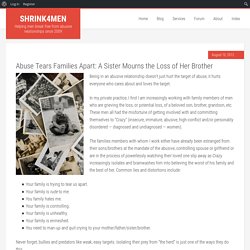 In my private practice, I find I am increasingly working with family members of men who are grieving the loss, or potential loss, of a beloved son, brother, grandson, etc. These men all had the misfortune of getting involved with and committing themselves to “Crazy” (insecure, immature, abusive, high-conflict and/or personality disordered — diagnosed and undiagnosed — women). The families members with whom I work either have already been estranged from their sons/brothers at the mandate of the abusive, controlling spouse or girlfriend or are in the process of powerlessly watching their loved one slip away as Crazy increasingly isolates and brainwashes him into believing the worst of his family and the best of her.

Common lies and distortions include: Never forget, bullies and predators like weak, easy targets. 1. 2. 3. 4. 5. For my brother.. Goodbye. Dr Tara J. Narcissistic Personality Disorder. How to Win Friends and Influence People by Dale Carnegie. Narcissism Checklist: Am I a Narcissist? If you have been in a relationship with a narcissist or are the adult child of narcisstic parents, your biggest fear may be discovering that you, too, may have some narcissistic traits. 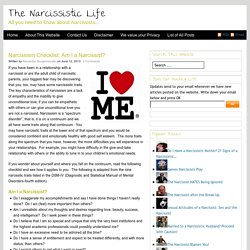 The key characteristics of narcissism are a lack of empathy and the inability to give unconditional love; if you can be empathetic with others or can give unconditional love-you are not a narcissist. Narcissism is a “spectrum disorder”, that is, it is on a continuum and we all have some traits along that continuum. You may have narcisstic traits at the lower end of that spectrum and you would be considered confident and emotionally healthy with good self esteem. The more traits along the spectrum that you have, however, the more difficulties you will experience in your relationships. For example, you might have difficulty in the give-and-take relationship with others or the ability to tune in to your children’s emotional needs. 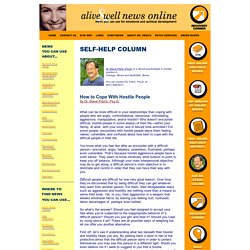 Steve Frisch, Psy.D. Understanding Dysfunctional Relationship Patterns in Your Family. Many people hope that once they leave home, they will leave their family and childhood problems behind. 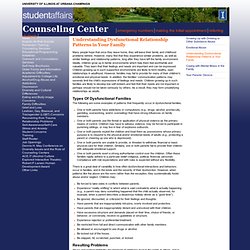 However, many find that they experience similar problems, as well as similar feelings and relationship patterns, long after they have left the family environment. Ideally, children grow up in family environments which help them feel worthwhile and valuable. They learn that their feelings and needs are important and can be expressed. Children growing up in such supportive environments are likely to form healthy, open relationships in adulthood. However, families may fail to provide for many of their children’s emotional and physical needs. Types Of Dysfunctional Families The following are some examples of patterns that frequently occur in dysfunctional families.

There is a great deal of variability in how often dysfunctional interactions and behaviors occur in families, and in the kinds and the severity of their dysfunction. Resulting Problems Making Changes Special Considerations. Get The Friends You Want : Overcome Shyness & Loneliness, Master Conversation & Social Skills, Make Friends & Build a Social Circle. Financial Advice for Married Couples: Part 2 of Mama’s Boy Situation - Blog Nation. The Narcissistic Family.

There’s virtually no such thing as a healthy, functional family that has one narcissist in it. 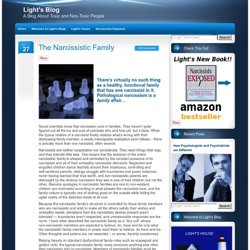 Pathological narcissism is a family affair… Social scientists know that narcissism runs in families. They haven’t quite figured out all the ins and outs of precisely why and how yet, but it does. When the typical relative of a narcissist finally realizes what’s wrong with their distressing family member, a nearly inescapable realization soon follows – there is actually more than one narcissist, often several. Narcissists are neither cooperative nor considerate. Because the narcissistic family’s structure is controlled by those family members who are narcissistic and wish to make all the others satisfy their wishes and unhealthy needs, deviations from the narcissistic desires present aren’t tolerated — boundaries aren’t respected, and unreasonable responses are the norm.

“…you have to put up with this; you have no choice, and there’s nothing you can do about it.” The Narcissistic Parent. Narcissistic Personality Disorder. The narcissistic personality disorder is, in layman's terms, that person that is convinced the world revolves around them, and, if they do not get their way, watch out. 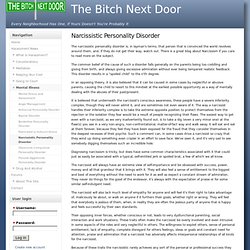 There is a great blog about Narcissism if you care to read more on the subject. The common belief of the cause of such a disorder falls generally on the parents being too coddling and giving from birth, and always giving excessive admiration without ever being tempered realistic feedback. This disorder results in a "spoiled child" to the n'th degree.

Related:  How to Win Friends and Influence People by Dale Carnegie   -  Education   -  Enterprise