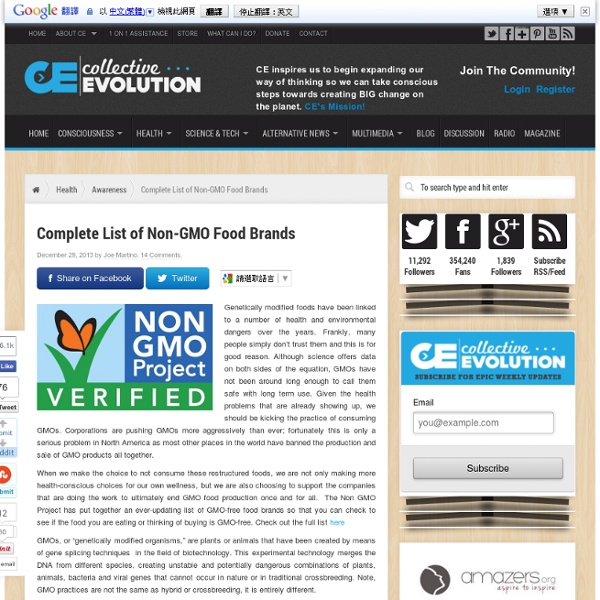 Genetically modified foods have been linked to a number of health and environmental dangers over the years. Frankly, many people simply don’t trust them and this is for good reason. Although science offers data on both sides of the equation, GMOs have not been around long enough to call them safe with long term use. Given the health problems that are already showing up, we should be kicking the practice of consuming GMOs. Corporations are pushing GMOs more aggressively than ever; fortunately this is only a serious problem in North America as most other places in the world have banned the production and sale of GMO products all together. When we make the choice to not consume these restructured foods, we are not only making more health-conscious choices for our own wellness, but we are also choosing to support the companies that are doing the work to ultimately end GMO food production once and for all. “The difference is pretty large. Learn more about GMOs here. Sources:

GMO Food - It's Worse Than We Thought - Dr. Russell Blaylock GMO Food — It's Worse Than We Thought Over the last decade, as genetically modified, or GMO, foods have increasingly taken over our food supply, we've been learning more about their dangers to our health. Now, one courageous doctor is pointing to mounting evidence that leaves no doubt — GMO foods are even worse than we were told. As this respected doctor points out in a riveting new presentation, no long-term human studies have ever supported GMO safety. Yet while lifetime studies still have not been done on humans, scientists have done these studies on animals — and what they found is stunning. Shockingly, 50 percent of the males and 70 percent of the female animals on the GMO diet succumbed to early death at an age equivalent to 40 to 50 human years. While more people have begun to fight back against GMOs, the big GMO companies spend millions of dollars to defeat laws that would require GMO labeling. Fortunately, one courageous doctor has stepped up to the plate. Dr. Rate This Video:

Biotech front group's smear campaign against Doctor Oz spectacularly backfires as he publicly outs the felons and frauds behind it (NaturalNews) The contrived attacks on Doctor Oz backfired in spectacular fashion today as he took to the air to expose the convicted felons, frauds and hucksters -- all doctors operating as corporate front men -- who tried to silence him. To confront the vicious attempts at defamation and slander against him, Doctor Oz invited celebrated integrative medicine expert Dr. Joel Fuhrman to appear on his show. (For background, Dr. Fuhrman earns a big thumbs up from Natural News for his passionate advocacy of holistic healing modalities and disease prevention expertise.) Natural News was the first news organization to expose the sleazy biotech industry front group behind the attacks on Oz. A sneak preview of the exchange between Dr. In this interview, Dr. Dr. Dr. Both Doctor Oz and Dr. Speaking of sleaze, read about the American Council on Science and Health, a biotech industry front group led by a doctor with a felony criminal record of fraud against the U.S. government. Dr. Dr. Dr. Dr. Dr.

The most common mistakes health nuts make with their diet (NaturalNews) There are phases we typically go through while learning to eat right and take control of our health. We tend to replace our bad habits with less harmful, but still bad habits.On the road to health, we often turn to supplements and tinctures for a quick fix. They usually work better and faster than conventional treatments when the tinctures and supplements are high quality.? But none of these "cures" get to the root of the problem. The foundation of health comes from the food you eat. Just because it's labeled organic, or vegan, or natural, does not mean it's healthy. Refined food, prepackaged food, "snack" food should be severely limited. This is a tough one. Sugar Is Sugar Is Sugar! The juices and the smoothies with juice fall under the same category as sugar. Juicing regularly has its place. For many people, this is the last step to regaining your health and living a life full of vitality without aches and pains. Do not let a lack of organic food choices stop you.

GMO Contamination of the Food Chain. Devastating Health Impacts. EU Food Safety Regulators Turn “A Blind Eye” “Corporations as the dominant institution shaped by capitalist patriarchy thrive on eco-apartheid. They thrive on the Cartesian legacy of dualism which puts nature against humans. It defines nature as female and passively subjugated. Corporatocentrism is thus also androcentric – a patriarchal construction. The false universalism of man as conqueror and owner of the Earth has led to the technological hubris of geo-engineering, genetic engineering, and nuclear energy. It has led to the ethical outrage of owning life forms through patents, water through privatization, the air through carbon trading. The protection of biodiversity involves maintaining the ability of organisms to develop under their evolved dispositions and naturally established restrictions and to participate in further evolutionary processes. We seek to protect organisms and ecosystems from persistent chemical substances. Commercial cultivation and experimental field trials are responsible for much of this contamination.

Natural News Blogs Cancer is Mainly Caused by The Intake of Acidic Food Cancer main cause is by the food we eat. Some time ago we consumed a diet of mainly alkaline food but that has changed and rate of cancer also. The majority doctors don’t inform you on the correct food to eat to stay free of cancer and what to eat to cause the body to remove it naturally. The Foods we eat in today’s time contain both acid and alkalinizing forming elements. A diet of mainly acid forming food can contribute to cancer and the common diet here in the western culture. We see more people with cancer today than ever before and it’s because of the typical western diet is far too high in acid producing foods such as animal products which include dairy products. The foods we use to eat like freshly grown fruit and vegetables where much better for us, so the best solution is to make some dietary changes. The easiest way to find out what foods are either alkaline or acidic is too research which foods are alkaline or acidic more so than others, also test your alkaline level often.

Blacklisted: GMO Supporting Food Companies to Avoid A genetically modified rose by any other name may smell sweet, but it could still have frankenthorns that might independently detach themselves and lop off your finger while you’re smelling it. That’s not unlike a trip to the grocery store these days. There are a lot of ugly surprises in pretty, charmingly-named packages. It seems like no matter how hard you try to avoid them, GMOs and toxic foods creep into your life. Take for example, the earthily-packaged “natural” foods that are showcased in your grocery store aisles. They cost twice as much, have obscure brand names, and tout their health benefits and natural sources. Unfortunately, this is nothing more than corporate sleight-of-hand. Many of the products that seem so good are actually just subsidiaries of the companies that were most complicit in blocking GMO labeling, aided and abetted by everyone’s favorite purveyor of death, Monsanto. Not every item on this list contains genetically modified ingredients. Campbell’s - $250,000.00

GMO's IN TNE NEWS The Cornucopia Institute March 30th, 2011 Lawsuit Filed To Protect Themselves from Unfair Patent Enforcement on Genetically Modified Seed Action Would Prohibit Biotechnology Giant from Suing Organic Farmers and Seed Growers If Innocently Contaminated by Roundup Ready Genes NEW York: On behalf of 60 family farmers, seed businesses and organic agricultural organizations, the Public Patent Foundation (PUBPAT) filed suit today against Monsanto Company challenging the chemical giant’s patents on genetically modified seed. Monsanto has sued farmers in the United States and Canada, in the past, when there are patented genetic material has inadvertently contaminated their crops. A copy of the lawsuit can be found at: ( The case, Organic Seed Growers & Trade Association, et al. v. Once released into the environment, genetically modified seed can contaminate and destroy organic seed for the same crop. Dr. David L.

Enzymatic Therapy, Inc. - Daily Digestion Support: The Role of Fiber in Digestion Fiber is an important element of proper digestion. Once the enzymes have broken down the food, fiber binds to the food (& toxins) in your intestines and keeps the waste moving through. Too much fiber and things may move faster than you'd like. Too little and the waste can move through too slowly and build up in your system. Insoluble vs Soluble Fiber Insoluble fiber passes through the body virtually unchanged. It is recommended that adults have a combination of soluble and insoluble fiber each day totalling 25-30 grams. Good Sources of Fiber Choosing a Fiber Supplement If adding high fiber foods to your diet isn't enough, fiber supplements can be a good option. Convenience: Are you okay with having a drink mix version of fiber, will you use it regularly?

WHAT ARE GMO'S? What are GMOs? GMOs (or “genetically modified organisms”) are living organisms whose genetic material has been artificially manipulated in a laboratory through genetic engineering, or GE. This relatively new science creates unstable combinations of plant, animal, bacteria and viral genes that do not occur in nature or through traditional crossbreeding methods. Virtually all commercial GMOs are engineered to withstand direct application of herbicide and/or to produce an insecticide. Meanwhile, a growing body of evidence connects GMOs with health problems, environmental damage and violation of farmers’ and consumers’ rights. Are GMOs safe? Are GMOs labeled? Where does the Non-GMO Project come in? Do Americans want non-GMO foods and supplements? How common are GMOs? Why does the Non-GMO Project verify products that have a low risk of containing GMOs? Contamination incidents have occurred with seemingly “low-risk” products (rice, starling corn, flax). How do GMOs affect farmers?

'Worm pill' could ease autoimmune disease symptoms -- ScienceDaily Experts believe a molecule in parasitic worms could help explain why worm infections can effectively treat a range of autoimmune diseases, including multiple sclerosis, psoriasis, rheumatoid arthritis and lupus. The Monash University study, published in the FASEB Journal, successfully identified peptides from parasitic worms that suppress the body's immune response. Researchers believe this could pave the way for a new drug containing the peptide to provide relief from the symptoms of autoimmune diseases. Affecting as many as one in 20 Australians, autoimmune diseases occur when a person's immune system has an abnormal response against its own cells, tissues or even entire organs, resulting in inflammation and damage. Lead researcher Professor Ray Norton from Monash Institute of Pharmaceutical Sciences (MIPS) said experts around the world have yet to fully understand the causes of autoimmune diseases, which have risen significantly in parts of the world.

GMO and Your Health Why should you care about GMOs? Do you eat food? Then you definitely have to watch this video! Independent, scientific evidence that contradicts what Monsanto and the FDA are saying: 40% increase of IBS (Irritable Bowel Syndrome) since the introduction of GMOs in our foodGenetic modification causes massive collateral damage to plant cellsGlyphosate (Round UP weedkiller) increases disease susceptibility in plantsGlyphosate causes nutrient deficiency in soil, plants, and therefore our foodBt toxin from GM crops found in human tissue and may cause gene transferUp to 90 percent of several U.S.grown crops are grown with genetically engineered seed. As of 2009, the overall RoundUP brand line of products including the GM seeds represented about 50% of Monsanto’s business. Approximately 150 companies have licensed the GM seed technology, including Syngenta and Dupont/Pioneer. Is it okay for them to poison us while they make money? We have the Right To Know. Ramona and the Healing GrapeVine Team