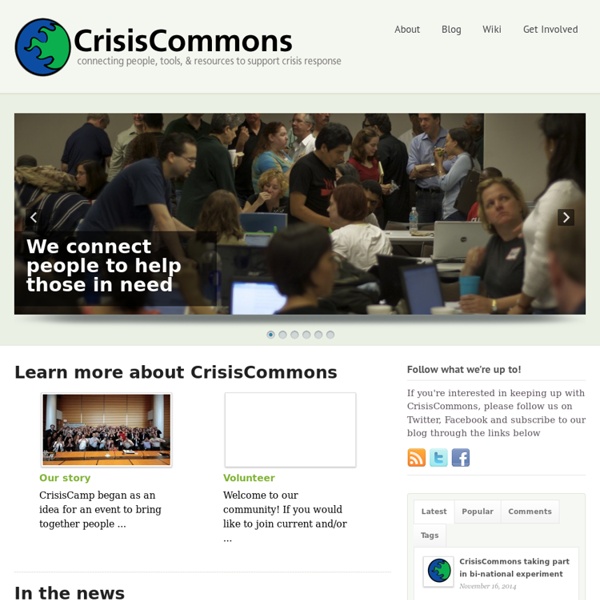 Microtasking Advocacy and Humanitarian Response in Somalia I’ve been working on bridging the gap between the technology innovation sector and the humanitarian & human rights communities for years now. One area that holds great promise is the use of microtasking for advocacy and humanitarian response. So I’d like to share two projects I’m spearheading with the support of several key colleagues. I hope these pilot projects will further demonstrate the value of mainstreaming microtasking. Both initiatives are focused on Somalia.

Crowdmap What Exactly Is Crowdmap? Crowdmap is designed and built by the people behind Ushahidi, a platform that was originally built to crowdsource crisis information. As the platform has evolved, so have its uses. Crowdmap allows you to set up your own map of Ushahidi without having to install it on your own web server. What Can I Do With Crowdmap? Crowd sourced stats Everybody knows the crowd sourced open street map. There are also a crowd sourced stats: numbeo. Self declaration of is as follows: ‘Numbeo is the biggest free database of user contributed data about cities and countries worldwide, especially living conditions: cost of living, housing indicators, health care systems, traffic, crime and pollution.’ It’s not the (harmonized) price index statistical agencies disseminate. It’s much more pragmatic and useful for detailed information about single prices at specific locations.

Fourth-Generation Early Warning Systems (Updated) This blog post follows the discussion on first-, second- and third-generation early warning systems from the previous post below. The purpose of this entry is to make more clear the distinctions between third-generation (3G) and fourth-generation (4G) early warning systems. Note that the distinction between 3G and 4G systems does not imply that one is necessarily better or more effective than the other. Each generation of early warning systems has its own comparative advantage and a role to play in an ecosystem approach to conflict early warning and rapid response. Course Materials - Crisis Mapping, Politics & New Media Dear community, I am developing a new course: Political Science 397: Crisis Mapping, Politics & New Media. As the course progresses I will post materials here for your review. Please feel free to use any portion of the materials posted here for your own course development.

Tech Speeds Humanitarian Response RIO DE JANEIRO — Amid discussions Tuesday of ways social media can be used to ensure a sustainable future for the planet, one Rio+Social conversation emphasized how technology is accelerating and improving humanitarian relief. Antonia Guterres, U.N. high commissioner for refugees, Hans Vestberg, CEO of Ericsson, and Ertharin Cousin, executive director of the World Food Programme discussed how their respective organizations use technology to address the world's challenges, in a panel moderated by Robb Skinner, associate director of the U.N. Foundation.

a child's right We are thrilled to announce that, as of October 10, 2012, A Child’s Right is operating under a new name: Splash. We want to assure you that, even though our name is different, nothing about who we are or what we do is changing. Our mission, values, core work model, partners, staff, and plans for future growth remain the same. Why Splash? What is Crisis Mapping? An Update on the Field and Looking Ahead I last updated my piece on A Brief History of Crisis Mapping some two years ago, well before the first International Conference on Crisis Mapping was held (ICCM 2009). So a brief update on the past 24 months may be in order, especially for a field that continues to grow so rapidly. When I Googled the term “crisis mapping” in September 2009, I got 8,680 hits.

#Ambon: Conflict and Containment Through Virtual Networks Image Courtesy of the Author The story that follows is the subject of an ongoing investigation by the Indonesian National Human Rights Commission (Komnas HAM), whose working conclusion is that the riots that occurred on September 11th and 12th, 2011, taking seven lives and causing 65 injuries on the small island of Ambon, Indonesia, may have been intentionally provoked by certain parties through text message rumors. Despite a slow and ineffective response by police on the ground, the violence did not engulf the entire island. Some say that the riots were contained by efforts in the same vessel through which they were spread: text messages and virtual social networks. Early last month, in the middle of a small city on Ambon, one of Indonesia’s Maluku Islands, a Muslim ojek (motorcycle taxi) driver was found covered in blood in a gutter in a Christian part of town, where Muslims don’t often go. Motorcycle deaths are not uncommon in Indonesia.

OpenStreetMap Where is this? Reverse Directions Welcome to OpenStreetMap! OpenStreetMap is a map of the world, created by people like you and free to use under an open license. Hosting is supported by UCL, Bytemark Hosting, and other partners. Learn More Start Mapping