Interactive Periodic Table of the Elements, in Pictures and Words 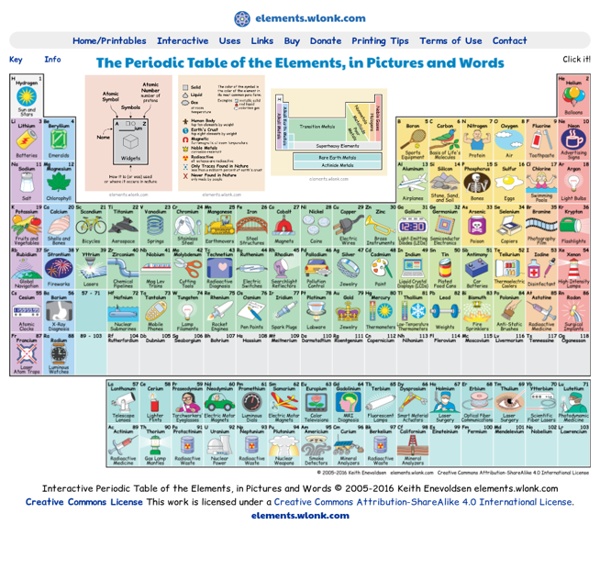 My Molecularium - Get the App for your mobile device! "Angry birds meets nanoscience, with this sling-shot style molecule building game...This is a fun game that is well worth the download." - Children's Technology Review My Molecularium is a fun and challenging molecule building game.Launch atoms at target bond sites to assemble essential molecules of increasing complexity and difficulty. Move your device to direct your shots using our innovative laser-guided aim. The Map of Chemistry: New Animation Summarizes the Entire Field of Chemistry in 12 Minutes. Philosophers, technologists, and futurists spend a good deal of time obsessing about the nature of reality. Recently, no small number of such people have come together to endorse the so-called “simulation argument,” the mind-boggling, sci-fi idea that everything we experience exists as a virtual performance inside a computer system more sophisticated than we could ever imagine. It’s a scenario right out of Philip K. Dick, and one Dick believed possible. It’s also, perhaps, terminally theoretical and impossible to verify.

Sighting Opportunity How do I Spot The Station? What does all this sighting information mean? Time is when the sighting opportunity will begin in your local time zone. All sightings will occur within a few hours before or after sunrise or sunset. This is the optimum viewing period as the sun reflects off the space station and contrasts against the darker sky. Why these colored water droplets seem to be alive Tonight, Sept. 2, the season finale of the year’s best TV show will air. It won’t be on the perennially prestigious HBO or AMC. Instead, it’ll air on USA Network, a cable channel with a middling reputation, previously known best for the glossy legal drama Suits. Virtual and Interactive Resources for Science Teachers Virtual labs have come a long way in recent years. While nothing compares to completing a hands-on lab in an actual science classroom, sometimes it isn't possible. Cost and access to equipment are possible obstacles. Other barriers include location. As more classes are being offered online, it necessary for students to complete activities in virtual environments.PhET- This website, from the University of Colorado, has been around for over 15 years. It offers free interactive math and science simulations in game-like environment.

September 20 - On This Day in Chemistry His work blurred the line between chemistry and physics. Dewar’s achievements include designing an insulating double-walled flask with a vacuum between two silvered layers of steel or glass – the technology that led to the modern domestic Thermos flask. Related Resources Periodic Table Battleship I have posted a lot about Chemistry lately. My oldest has been studying it and really enjoying it. I love his science-y mind! Corkboard Connections: Hands-on Water Cycle Fun! Now that I'm retired, I often miss working with children; children are my inspiration and the classroom is my laboratory! Recently I accepted a position at a local school to work with kids during their year round intersession program, and I had the pleasure of teaching science to 5th graders for 3 days. I had a wonderful time teaching them about the water cycle and weather, especially since I was able to incorporate a hands-on activity and an exciting demonstration into our lessons. One activity was adapted from a terrific idea shared with me by Pat Calfee, a former elementary teacher who is now an educational consultant. When Pat was teaching 2nd grade, she used plastic rotisserie chicken containers to have her students create mini water cycles. Because 5th graders need to know the full water cycle including transpiration and run-off, we modified our mini water cycles slightly.

Discover Chemistry: Explore an Unknown Liquid - Planet Smarty Pants This is a new post in my Think Like a Scientist series. I must be very successful in “discovery” experiments, because my 7 year old cannot get enough of them. This time we explored an unknown liquid. Setting Up an Experiment 8 Math and Science Simulation Resources For Any Classroom "Science is fun. Science is curiosity. We all have natural curiosity. Science is a process of investigating. It's posing questions and coming up with a method. It's delving in." November 8 - On This Day in Chemistry He produced the first X-ray images picturing the bones in his wife’s hand. He was awarded the Nobel Prize in Physics in 1901 “in recognition of the extraordinary services he has rendered by the discovery of the remarkable rays subsequently named after him.” Related Resources

The Compound Interest 2015 Advent Calendar The Compound Interest 2015 Advent CalendarCompound Interest2015-12-05T23:46:46+00:00 Starting from 1st December, there’s going to be a new graphic every day until Christmas; so even if you don’t celebrate Christmas, it’s a good excuse to get a daily chemistry fix. Click on one of the numbered benzene-flakes to go to the respective day’s mini graphic! If the Moon Were Only 1 Pixel - A tediously accurate map of the solar system Mercury Venus Earth You Are Here Moon