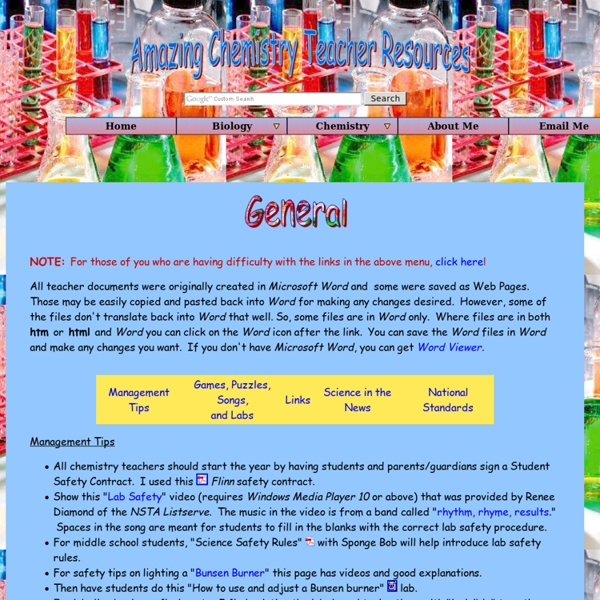 NOTE: For those of you who are having difficulty with the links in the above menu, click here!All teacher documents were originally created in Microsoft Word and some were saved as Web Pages. Those may be easily copied and pasted back into Word for making any changes desired. However, some of the files don't translate back into Word that well. So, some files are in Word only. Where files are in both htm or html and Word you can click on the Word icon after the link.

Cucumber Chemistry: Moisture Capture with Desiccants Observations and results Did you observe the cucumber slices shrinking? The fresh cucumber should have remained very crisp and moist over the 30 minutes you observed it. This is because 96 percent of a cucumber is actually water. For the slices with salt, sugar or baking powder on top, you should have noticed that over time the substances became wet and soaked up the water from the cucumber. You probably had to exchange the salt most often throughout the activity. After 30 minutes, the experimental cucumber slices should have lost some weight and the slices may have become thinner and much squishier compared with the control slice.

Teach Yourself Chemistry By Anne Marie Helmenstine, Ph.D. Updated December 02, 2014. Chemistry is a logical science. You can master the essential concepts yourself. You can study these concepts in any order, but it's probably best to start from the top and work your way down, since many concepts build on understanding units, conversion and how atoms and molecules interact. Introduction to Chemistry: Learn about what chemistry is, what chemists do, and why you would want to study this science. Chemistry Study Guides - SparkNotes Home → SparkNotes → Chemistry Study Guides Subjects Chemistry Fundamentals of Chemistry Rising Sea Levels: Causes and Solutions The 20th anniversary of Earth Day in 1990 was momentous for me for a simple reason: My second book, Saving the Earth, A Citizen’s Guide to Environmental Action, was published on that day. It was one of a handful of books that came out that spring—including Bill McKibben’s groundbreaking End of Nature—that attempted to draw attention to a handful of environmental concerns that we all saw at the time as being grave, though not very well understood. Climate change was one of those concerns. “Global warming” was a phrase just starting to be heard, in large part due to the June 23, 1988 testimony of NASA scientist James Hansen before the Senate Committee on Energy and Natural Resources in which he explained how and why the Earth was heating up. Hansen, of course, quit his job at NASA just a few weeks ago to allow himself more free time to remind people that the risks he warned about more than two decades ago are still very relevant. We know what causes rising sea levels:

The Elements Revealed: An Interactive Periodic Table In the October 2011 issue of Scientific American, we celebrate the International Year of Chemistry. Learn more about its impact on our daily lives in our Special Report. UPDATED: 06/18/2013 In honor of the 2013 Lindau meeting, which focuses on chemistry, we have updated our interactive periodic table with links to Nature Chemistry's In Your Element essay series. Each essay tells the story of a particular element, often describing its discovery, history and eventual uses. Main Sources & More to Explore:

New resources to support science education / Home - Science Online You are here: This section presents new resources in three areas of dynamic change possibilities for science education in New Zealand schools in order to develop science capabilities for citizenship as stated in the New Zealand Curriculum. The Ministry of Education endorsed this work to support the ongoing implementation of the science learning area of NZC. The resources show how to weave the Nature of Science strand and the key competencies into science teaching and learning.

PinkMonkey Chemistry Study Guide PinkMonkey.com Chemistry Study Guide Chapter 1 Introduction Chapter 2 Elements 2.1 Classification of Elements 2.2 Macro and Micro Economics How to Give Clean Water to Africa We're committed to providing a reasonable estimate of usage. It doesn't help anyone to overstate the true impact of a water project. Most of our recent projects actually serve around 500 people, which we consider the upper end of a reasonable limit for any hand-pumped well. Hydrogen»uses [WebElements Periodic Table] The following uses for hydrogen are gathered from a number of sources as well as from anecdotal comments. I'd be delighted to receive corrections as well as additional referenced uses (please use the feedback mechanism to add uses). One of hydrogen's isotopes, tritium (3H) is radioactive. Tritium is produced in nuclear reactors and is used in the production of the hydrogen bomb.

CHEM101: General Chemistry I Course IntroductionThis chemistry survey is designed to introduce students to the world of chemistry. The principles of chemistry were first identified, studied, and applied by ancient Egyptians in order to extract metal from ores, make alcoholic beverages, glaze pottery, turn fat into soap, and much more. What began as a quest to build better weapons or create potions capable of ensuring everlasting life has since become the foundation of modern science. Take a look around you: chemistry makes up almost everything you touch, see, and feel, from the shampoo you used this morning to the plastic container that holds your lunch. In this course, we will study chemistry from the ground up, learning the basics of the atom and its behavior.

Chapter Overview Chapter 1: Molecules in Motion Students will experience all five elements of inquiry as they ask questions about M&M’s in water, design and conduct experiments to answer these questions, and develop explanations based on their observations. Chapter 2: Physical Properties & Physical Change in Solids Creative Chemistry Fun Stuff Index It’s always time for Chemistry, but sometimes you want to have even more fun! I’ve put together a load of fun activities to make you a Happy Chemist, so choose something and enjoy it. There are ten main bits in Fun Stuff: Get down (and across) with my interactive Crossword Puzzles; Test your nerves against the clock in the Impossible Mission Quizzes (there are three difficulty levels and a choice of Missions); NOW WITH ANSWERS IF YOU GET STUCK! Race against the clock to complete one of five Word Searches (they’re never the same); Try your hand at the fiendish Slide Puzzle; Rope yourself into the Chemistry Hangman puzzle; Test your memory powers with the Chemistry Concentration Game; Try out my Chemistry Jigsaws; Unscramble the letters in the Chemistry Word Jumble; Uncover the Periodic Table in the Chemistry Breakout Game; or just for fun ...