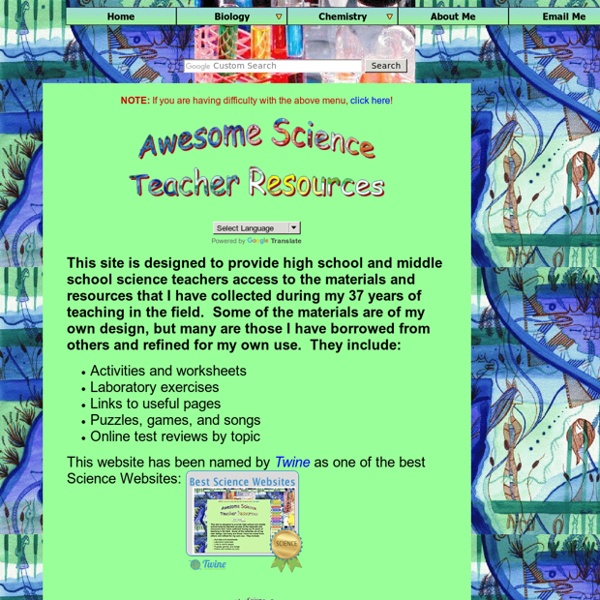 Science Writer - Help with Lab Reports Welcome to CAST Science Writer, the tool that supports students in writing lab and class reports. This tool is geared toward middle school and high school students. Check out the supports and help available in Science Writer described below. Or click the "Take a Tour" button above to see how Science Writer works. A Report Structure All parts of a science or lab report are broken into small steps so the author can concentrate on one part of the report at a time. Matter Matter is everything around you. Atoms and molecules are all composed of matter. Matter is anything that has mass and takes up space. If you are new to the idea of mass, it is the amount of stuff in an object. We talk about the difference between mass and weight in another section.

Your insight into science The universe is a vast soup of interacting particles and energy. The ways in which those interactions take place, as well as the structure and composition of matter, is the main focus of the field of chemistry. Our chemistry learning modules introduce you to the world of chemistry, exploring current research and scientific findings on concepts like the structure and function of atoms, forms of energy and its transfer, chemical bonding and reactions, and more. Summary Tracking the development of our understanding of the atomic structure of matter, this module begins with the contributions of ancient Greeks, who proposed that matter is made up of small particles. The module then describes how Lavoisier's Law of Conservation of Mass and Proust's Law of Definite Proportions contributed to Dalton's modern atomic theory.

Homework Help: Science for Kids Science is the study of the world around us. Scientists learn about their subject by observing, describing, and experimenting. There are many subjects and branches of science. Some study outer space like astronomy. Other sciences study life (biology) or the earth (geology) or even matter and energy (physics).

How the Moon Affects the Date of Easter Friday (April 6) brings us the first full moon of the new spring season. The official moment that the moon turns full is 19:19 UT, or 3:19 p.m. EDT. Traditionally, the April full moon is known as "the Pink Moon," supposedly as a tribute to the grass pink or wild ground phlox, considered one of the earliest widespread flowers of the spring. Other monikers include the Full Sprouting Grass Moon, the Egg Moon and, among coastal Native American tribes, the Full Fish Moon, for when the shad came upstream to spawn. (Traditional names for the full moons of the year are found in some publications, such as the Farmers' Almanac.

Secret Worlds: The Universe Within - Interactive Java Tutorial Secret Worlds: The Universe Within View the Milky Way at 10 million light years from the Earth. Then move through space towards the Earth in successive orders of magnitude until you reach a tall oak tree just outside the buildings of the National High Magnetic Field Laboratory in Tallahassee, Florida. After that, begin to move from the actual size of a leaf into a microscopic world that reveals leaf cell walls, the cell nucleus, chromatin, DNA and finally, into the subatomic universe of electrons and protons. Comparing Two Ecosystems Introduction: There are many different types of biomes on the planet that are characterized by a certain weather pattern, dominant plants and dominant animals. These areas are also called ecosystems. In some areas, particularly those biomes that are close on the map, you will have some overlap of plant and animal species.