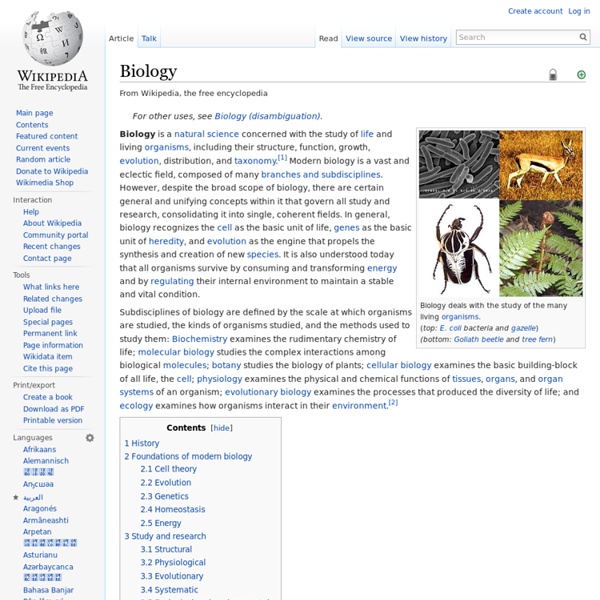 History The objects of our research will be the different forms and manifestations of life, the conditions and laws under which these phenomena occur, and the causes through which they have been effected. The science that concerns itself with these objects we will indicate by the name biology [Biologie] or the doctrine of life [Lebenslehre]. Although modern biology is a relatively recent development, sciences related to and included within it have been studied since ancient times. Natural philosophy was studied as early as the ancient civilizations of Mesopotamia, Egypt, the Indian subcontinent, and China. However, the origins of modern biology and its approach to the study of nature are most often traced back to ancient Greece.[6] While the formal study of medicine dates back to Hippocrates (ca. 460 BC – ca. 370 BC), it was Aristotle (384 BC – 322 BC) who contributed most extensively to the development of biology. Foundations of modern biology Cell theory Main article: Cell theory Genetics

Physics Various examples of physical phenomena Physics is one of the oldest academic disciplines, perhaps the oldest through its inclusion of astronomy.[8] Over the last two millennia, physics was a part of natural philosophy along with chemistry, certain branches of mathematics, and biology, but during the Scientific Revolution in the 17th century, the natural sciences emerged as unique research programs in their own right.[b] Physics intersects with many interdisciplinary areas of research, such as biophysics and quantum chemistry, and the boundaries of physics are not rigidly defined.

Organism Life is a characteristic distinguishing objects having signaling and self-sustaining processes from those that do not,[1][2] either because such functions have ceased (death), or because they lack such functions and are classified as inanimate.[3][4] Biology is science concerned with the study of life. Though life is confirmed only on the Earth, many think that extraterrestrial life is not only plausible, but probable or inevitable.[15][16] Other planets and moons in the Solar System have been examined for evidence of having once supported simple life, and projects such as SETI have attempted to detect radio transmissions from possible alien civilizations. According to the panspermia hypothesis, microscopic life exists throughout the Universe, and is distributed by meteoroids, asteroids and planetoids.[17] Early theories Materialism Herds of zebra and impala gathering on the Maasai Mara plain

Anthropology Anthropology /ænθrɵˈpɒlədʒi/ is the study of humankind, past and present,[1][2] that draws and builds upon knowledge from social and biological sciences, as well as the humanities and the natural sciences.[3][4] Since the work of Franz Boas and Bronisław Malinowski in the late 19th and early 20th centuries, anthropology in Great Britain and the US has been distinguished from ethnology[5] and from other social sciences by its emphasis on cross-cultural comparisons, long-term in-depth examination of context, and the importance it places on participant-observation or experiential immersion in the area of research. In those European countries that did not have overseas colonies, where ethnology (a term coined and defined by Adam F.

Ecology Ecology is an interdisciplinary field that includes biology and Earth science. The word "ecology" ("Ökologie") was coined in 1866 by the German scientist Ernst Haeckel (1834–1919). Ancient Greek philosophers such as Hippocrates and Aristotle laid the foundations of ecology in their studies on natural history. Charles Darwin Charles Robert Darwin, FRS (/ˈdɑrwɪn/;[1] 12 February 1809 – 19 April 1882) was an English naturalist and geologist,[2] best known for his contributions to evolutionary theory.[I] He established that all species of life have descended over time from common ancestors,[3] and in a joint publication with Alfred Russel Wallace introduced his scientific theory that this branching pattern of evolution resulted from a process that he called natural selection, in which the struggle for existence has a similar effect to the artificial selection involved in selective breeding.[4] Darwin published his theory of evolution with compelling evidence in his 1859 book On the Origin of Species, overcoming scientific rejection of earlier concepts of transmutation of species.[5][6] By the 1870s the scientific community and much of the general public had accepted evolution as a fact. Biography

Science General Systematic enterprise that builds and organizes knowledge The Universe represented as multiple disk-shaped slices across time, which passes from left to right Modern science is typically divided into three major branches that consist of the natural sciences (e.g., biology, chemistry, and physics), which study nature in the broadest sense; the social sciences (e.g., economics, psychology, and sociology), which study individuals and societies; and the formal sciences (e.g., logic, mathematics, and theoretical computer science), which study abstract concepts. There is disagreement,[19][20][21] however, on whether the formal sciences actually constitute a science as they do not rely on empirical evidence.[22][20] Disciplines that use existing scientific knowledge for practical purposes, such as engineering and medicine, are described as applied sciences.[23][24][25][26] History Early cultures

Cell biology Understanding cells in terms of their molecular components. Knowing the components of cells and how cells work is fundamental to all biological sciences. Appreciating the similarities and differences between cell types is particularly important to the fields of cell and molecular biology as well as to biomedical fields such as cancer research and developmental biology. These fundamental similarities and differences provide a unifying theme, sometimes allowing the principles learned from studying one cell type to be extrapolated and generalized to other cell types. Therefore, research in cell biology is closely related to genetics, biochemistry, molecular biology, immunology, and developmental biology. Processes[edit]