The Comic Book Periodic Table of the Elements 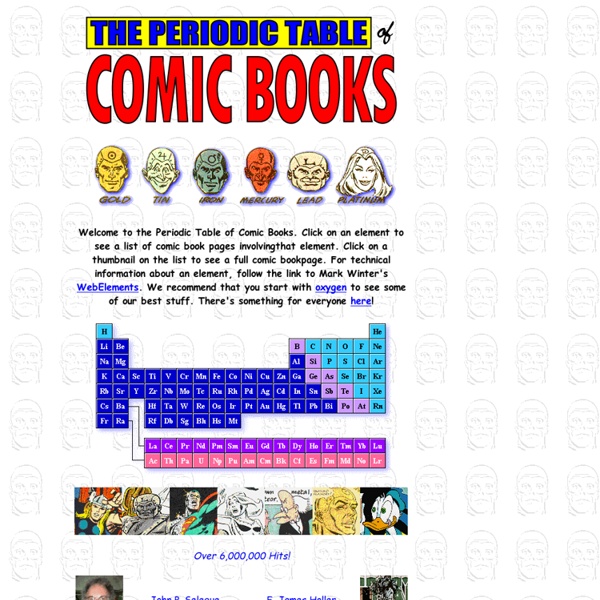 When an artist looks at a chemical element, what do they see? Artistic depictions of several chemical elements feature in a new exhibition from today as part of Australia’s celebrations for the International Year of the Periodic Table. They are the work of artists Damon Kowarsky and Hyunju Kim, who worked together since December 2018 on the renditions that will be on display at Quantum Victoria, a specialist science and mathematics centre in the northern suburbs of Melbourne. The project followed a chance meeting between Damon and Soula Bennett, the director of Quantum Victoria. Soula believes Science, Technology, Engineering and Mathematics (STEM) naturally extend to incorporate art. Read more: The periodic table: from its classic design to use in popular culture So Damon and Kim were commissioned to produce a series of 51 artistic interpretations illustrating elements of significance in the story of the birth of the universe from the Periodic Table.

Moonbase Alpha on Steam About This Game NASA has once again landed on the lunar surface with the goal of colonization, research, and further exploration. Shortly after the return to the Moon, NASA has established a small outpost on the south pole of the moon called Moonbase Alpha. The Elements According to Relative Abundance The Elements According to Relative Abundance A Periodic Chart by Prof Wm. F Sheehan, University of Santa Clara.CA 95053 NASA eClips™ NASA eClips™ are short, relevant educational video segments. These videos inspire and engage students, helping them see real world connections. Full Site Located:

History of Newton's Papers (1727-1872) At his death on 20 March 1727,[1] Isaac Newton left papers relating to all areas of the intellectual pursuits he had followed since arriving at Trinity College, Cambridge, in the summer of 1661.[2] His friend, relative by marriage (to Newton's half-niece Catherine Barton) and successor at the Mint, John Conduitt, posted a bond for Newton's debts and claimed entitlement to this material, Newton having died intestate. As is evident from a number of manuscripts adorned with Conduitt's notes and corrections -- for example the manuscript of 'An historical account of two notable corruptions of Scripture in a Letter to a Friend' (now New College, Oxford, Ms. 361.4) -- he took a serious scholarly interest in the papers he had acquired, although this was also partly directed towards the possibility of their publication. Continue reading about the donation of Newton's scientific papers to Cambridge University in 1872 [12] S.

Biomes of the World - Biome Map Click on a biome on the above graph for more information, informative videos, and links to scientist profiles, travel information, lesson plans and species profiles for each region. We'd like to know where you're coming from. If you've used this site for a class project or browsing for fun, add yourself to our map and communicate with other "ecogeeks"