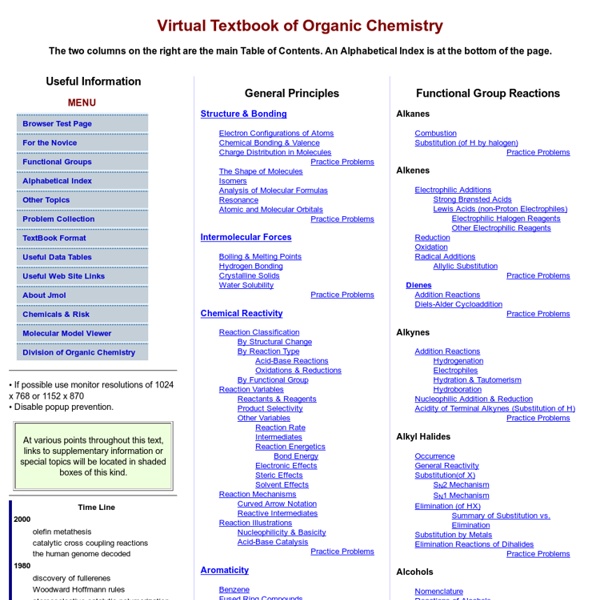 Organic Chemistry Organic Chemistry From Wikibooks, open books for an open world The latest reviewed version was checked on 9 August 2015. Jump to: navigation, search Welcome page Foreword To-Do List Appendix A: Introduction to reactions Appendix B: Index of reactions Appendix C: Introduction to functional groups Help organize the book structure. Compare this book to these college OChem textbooks: If you think you can help, check out the to do list of the authors over here - To-Do_List Book Distribution[edit] Retrieved from " Subjects: Hidden categories: Navigation menu Personal tools Namespaces Variants Views More Navigation Community Tools In other languages Edit links Sister projects Print/export In other projects This page was last modified on 9 August 2015, at 08:16.

Organic Chemistry Portal Stereoisomers Stereoisomers As defined in an earlier introductory section, isomers are different compounds that have the same molecular formula. When the group of atoms that make up the molecules of different isomers are bonded together in fundamentally different ways, we refer to such compounds as constitutional isomers. For example, in the case of the C4H8 hydrocarbons, most of the isomers are constitutional. Shorthand structures for four of these isomers are shown below with their IUPAC names. Note that the twelve atoms that make up these isomers are connected or bonded in very different ways. The bonding patterns of the atoms in these two isomers are essentially equivalent, the only difference being the relative orientation or configuration of the two methyl groups (and the two associated hydrogen atoms) about the double bond. Configurational Stereoisomers of Alkenes Some examples of this configurational stereoisomerism (sometimes called geometric isomerism) are shown below. Ethane Conformations