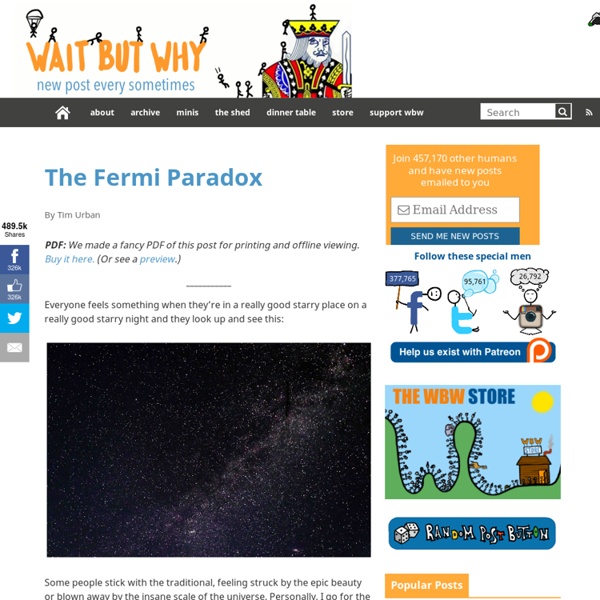 PDF: We made a fancy PDF of this post for printing and offline viewing. Buy it here. (Or see a preview.) Everyone feels something when they’re in a really good starry place on a really good starry night and they look up and see this: Some people stick with the traditional, feeling struck by the epic beauty or blown away by the insane scale of the universe. Personally, I go for the old “existential meltdown followed by acting weird for the next half hour.” Physicist Enrico Fermi felt something too—”Where is everybody?” A really starry sky seems vast—but all we’re looking at is our very local neighborhood. Galaxy image: Nick Risinger When confronted with the topic of stars and galaxies, a question that tantalizes most humans is, “Is there other intelligent life out there?” As many stars as there are in our galaxy (100 – 400 billion), there are roughly an equal number of galaxies in the observable universe—so for every star in the colossal Milky Way, there’s a whole galaxy out there. 1. 2.

'Pale orange dot': Early Earth's haze may give clue to habitability elsewhere in space An atmospheric haze around a faraway planet -- like the one which probably shrouded and cooled the young Earth -- could show that the world is potentially habitable, or even be a sign of life itself. Astronomers often use the Earth as a proxy for hypothetical exoplanets in computer modeling to simulate what such worlds might be like and under what circumstances they might be hospitable to life. In new research from the University of Washington-based Virtual Planetary Laboratory, UW doctoral student Giada Arney and co-authors chose to study Earth in its Archean era, about 2 ½ billion years back, because it is, as Arney said, "the most alien planet we have geochemical data for." The work builds on geological data from other researchers that suggests the early Earth was intermittently shrouded by an organic pale orange haze that came from light breaking down methane molecules in the atmosphere into more complex hydrocarbons, organic compounds of hydrogen and carbon.

Using Gravitational Waves to Pinpoint Colliding Black Holes Imagine watching birds in your backyard. You love birds and want to know when certain birds are there. Sure, you have your favorite binoculars to look for these birds—but what if you also listen for birds? Better yet, what if you use several microphones to determine the location and type of bird in your yard? This is what gravitational wave observatories add to the field of astronomy. 125 Great Science Videos: From Astronomy to Physics & Psychology Astronomy & Space Travel A Brief, Wondrous Tour of Earth (From Outer Space) - Video - Recorded from August to October, 2011 at the International Space Station, this HD footage offers a brilliant tour of our planet and stunning views of the aurora borealis.A Universe from Nothing - Video - In 53 minutes, theoretical physicist Lawrence Krauss answers some big enchilada questions, including how the universe came from nothing.A Year of the Moon in 2.5 Minutes - Video - The Lunar Reconnaissance Orbiter has been orbiting the moon for over a year. The footage gets compressed into 2 slick minutes.A Day on Earth (as Seen From Space) - Video - Astronaut Don Pettit trained his camera on planet Earth, took a photo once every 15 seconds, and then created a brilliant time-lapse film.Atlantis's Final Landing at Kennedy Space Center - Video - After more than 30 years, the space shuttle era comes to a close. Video runs 30 minutes. Physics

"Good" Children - At What Price? The Secret Cost of Shame By Robin Grille and Beth Macgregor / naturalchild.org A five-month-old baby is lying in his mother's arms. He is close to sleep, then wakes and begins to cry. File:Gregoriancalendarleap solstice.svg CancelEditDeletePreviewrevert Text of the note (may include Wiki markup) Could not save your note (edit conflict or other problem). Please copy the text in the edit box below and insert it manually by editing this page. Life on Earth likely started at least 4.1 billion years ago — much earlier than scientists had thought UCLA geochemists have found evidence that life likely existed on Earth at least 4.1 billion years ago — 300 million years earlier than previous research suggested. The discovery indicates that life may have begun shortly after the planet formed 4.54 billion years ago. The research is published today in the online early edition of the journal Proceedings of the National Academy of Sciences. “Twenty years ago, this would have been heretical; finding evidence of life 3.8 billion years ago was shocking,” said Mark Harrison, co-author of the research and a professor of geochemistry at UCLA. Reed Hutchinson/UCLA. Mark Harrison at UCLA.

LIGO Scientific Collaboration - The science of LSC research PDF version Read this summary [in PDF format] in French | German | Spanish A few months after the first detection of gravitational waves from the black hole merger event GW150914, the Laser Interferometer Gravitational-Wave Observatory (LIGO) has made another observation of gravitational waves from the collision and merger of a pair of black holes. This signal, called GW151226, arrived at the LIGO detectors on 26 December 2015 at 03:38:53 UTC. The signal, which came from a distance of around 1.4 billion light-years, was an example of a compact binary coalescence, when two extremely dense objects merge. Binary systems like this are one of many sources of gravitational waves for which the LIGO detectors are searching.

Top 10 Best Astrophotographers in the World The sky that we usually see and is considered to be an ordinary thing is in fact full of many wonders and secrets that need to be revealed but how to do this? Discovering more about the secrets that are hidden in the sky is costly and requires spending a long time trying to see the invisible objects and observe the changes that take place in front of your eyes using special equipment. The question is how to record all what you see and the amazing beauty of the invisible objects that can be found in the sky to enjoy watching them whenever you want? It is the role of the astrophotographers who come to dazzle us with the photos that they capture and are considered by many people to be unbelievable because of the stunning beauty that can be found in them. Patience is highly essential for capturing exceptional photographs as you have to keep looking at the sky with your eyes wide open waiting for the right and most exciting moments to capture.

Ten Awesome Science Courses You Can Take Online For FREE Science and the Internet are two individual entities that, when combined, become the 21st century’s most powerful educational tool. If you suddenly feel the urge to know why there’s a supermassive black hole at the center of every galaxy, or if you’re just wondering why you can’t tickle yourself, you can find out in under a minute using just your smartphone. If you’re looking for more than just a brief overview, why not take a look at these online courses by edX?