The Fermi Paradox. PDF: We made a fancy PDF of this post for printing and offline viewing. 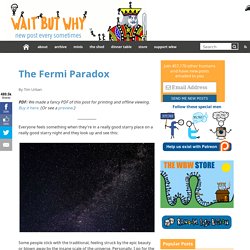 Buy it here. (Or see a preview.) Everyone feels something when they’re in a really good starry place on a really good starry night and they look up and see this: Some people stick with the traditional, feeling struck by the epic beauty or blown away by the insane scale of the universe. Personally, I go for the old “existential meltdown followed by acting weird for the next half hour.” Physicist Enrico Fermi felt something too—”Where is everybody?” A really starry sky seems vast—but all we’re looking at is our very local neighborhood. 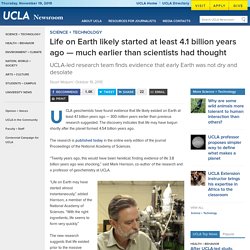 The discovery indicates that life may have begun shortly after the planet formed 4.54 billion years ago. 'Pale orange dot': Early Earth's haze may give clue to habitability elsewhere in space. An atmospheric haze around a faraway planet -- like the one which probably shrouded and cooled the young Earth -- could show that the world is potentially habitable, or even be a sign of life itself. 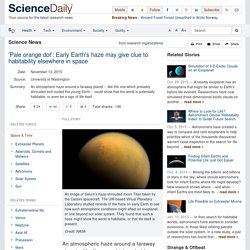 Astronomers often use the Earth as a proxy for hypothetical exoplanets in computer modeling to simulate what such worlds might be like and under what circumstances they might be hospitable to life. In new research from the University of Washington-based Virtual Planetary Laboratory, UW doctoral student Giada Arney and co-authors chose to study Earth in its Archean era, about 2 ½ billion years back, because it is, as Arney said, "the most alien planet we have geochemical data for. " The work builds on geological data from other researchers that suggests the early Earth was intermittently shrouded by an organic pale orange haze that came from light breaking down methane molecules in the atmosphere into more complex hydrocarbons, organic compounds of hydrogen and carbon. 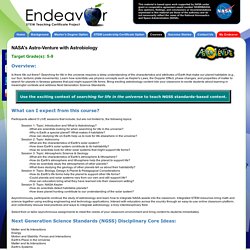 Searching for life in the universe requires a deep understanding of the characteristics and attributes of Earth that make our planet habitable (e.g., our Sun, tectonic plate movements). Learn how scientists use physics concepts such as Kepler's Laws, the Doppler Effect, phase changes, and properties of matter to search for planets in faraway galaxies that just might support life forms. Bring exciting astrobiology content into your classroom to excite students about learning in meaningful contexts and address Next Generation Science Standards. What can I expect from this course? Participants attend 5 LIVE sessions that include, but are not limited to, the following topics: Marsed.asu.edu/sites/default/files/stem_resources/Astrobiobound HS Alignment Document 3_20_14.pdf. 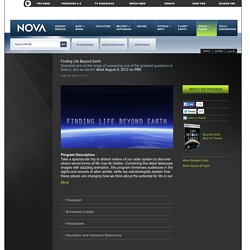 Is there life beyond Earth? The search for alien life is one of humankind's greatest technological challenges. And scientists are seeking new ways to find answers. JIM GREEN (Director, Planetary Science Division, NASA): We're pushing the boundary of information of where life can exist, past the earth and out into the solar system. NASA Astrobiology: Life in the Universe. Astrobiology: Life in the Universe. Why the USA and NASA need astrobiology. I am an astrobiologist, for 50 years an astronomer, and before that a physicist. 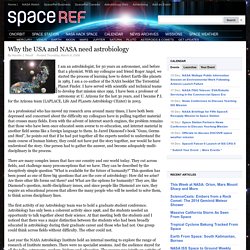 With my colleague and friend Roger Angel, we started the process of learning how to detect Earth-like planets in 1985. I am a co-author of the NASA booklet The Terrestrial Planet Finder. I have served with scientific and technical teams to develop that mission since 1995. I have been a professor of astronomy at U. Arizona for the last 30 years, and I became P.I. for the Arizona team (LAPLACE, Life And PLanets Astrobiology CEnter) in 2003. As a professional who has moved my research area around many times, I have both been depressed and concerned about the difficulty my colleagues have in pulling together material that crosses many fields. There are many complex issues that face our country and our world today.

The first activity of my Astrobiology team was to hold a graduate student conference. Neville J. Seth MacFarlane Champions New ‘Cosmos’ Series on Fox. Photo WASHINGTON — When some of the nation’s brightest minds gathered here at the Library of Congress to celebrate Carl Sagan, the pioneering astrobiologist, the first guest speaker was someone with no professional background in science. 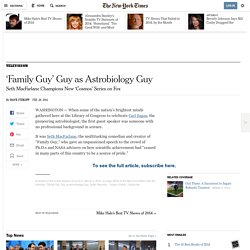 It was Seth MacFarlane, the multitasking comedian and creator of “Family Guy,” who gave an impassioned speech to the crowd of Ph.D.s and NASA advisers on how scientific achievement had “ceased in many parts of this country to be a source of pride.” Portico. Astrobiology Center. Astrobiology (@astrobiology) Astrobiology Web. Astrobiology Magazine Exploring the Solar System and beyond. TERC Astrobiology.

IAN: International Astrobiology Newsletter. Welcome to Astrobiology at the University of Washington. The Stanford Astrobiology Course. Welcome and introduction to website Astrobiology is at once one of the newest of scientific meta-disciplines, while at the same time encompassing some of our oldest and most profound questions. 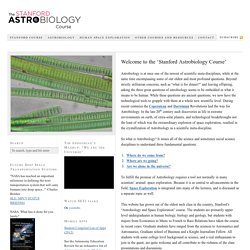 Beyond strictly utilitarian concerns, such as “what is for dinner?” And leaving offspring, asking the three great questions of astrobiology seems to be embedded in what it means to be human. While these questions are ancient questions, we now have the technological tools to grapple with them at a whole new scientific level. “Follow the Elements” Astrobiology at Arizona State University. Center for Astrobiology.