Einstein manuscripts: More than 110 new documents released. Einstein handwritten letter with equation fetches $1.2m. Albert Einstein relativity document sells for record €11m. Trace-free counterfactual communication with a nanophotonic processor. We perform our experiment using telecom single-photons in a state-of-the-art programmable nanophotonic processor (PNP),25 which is orders of magnitude more precise and stable than previous bulk-optic approaches.5,6 Our PNP also provides unprecedented tunability, which we use to investigate the scaling of the protocol by changing the number of chained interferometers. 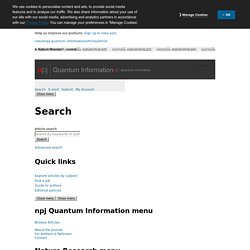 By combining the novel CFC protocol with our advanced photonic technology, we are able to implement counterfactual communication with a bit success probability above 99%, without post-selection. As in previous CFC protocols, the interferometer implementing the quantum Zeno effect is shared between Bob’s laboratory and the fully passive transmission channel. In contrast to these protocols, ours protocol allows for Alice’s laboratory to be situated outside the interferometer. Our protocol uses a series of N beamsplitters with reflectivity R = cos2(π/2N), which, together with mirrors, form a circuit of N − 1 chained MZIs.

In quantum mechanics, the pigeon and the letter do not always travel together. In standard communication the pigeon always carries the message; the information is linked to a physical entity/particle. 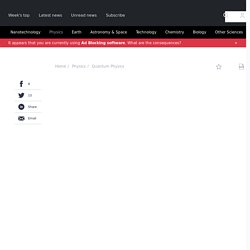 Counter to intuition, in a new counterfactual communication protocol published in NPJ Quantum Information, scientists from the University of Vienna, the University of Cambridge and the MIT have experimentally demonstrated that in quantum mechanics this is not always true, thereby contradicting a crucial premise of communication theory. Whether it is pigeons in the air, electrons in a telegraph wire, radio waves from a cell phone or single photons in an optical fiber, in standard communication, there is always a particle or wave involved in the information exchange between two parties; say Alice and Bob. However, in quantum mechanics, one can send information from Alice to Bob while the particle or wave involved in this information exchange travels from Bob to Alice.

What carries the message then? More information: I.

Hubble Telescope Discovery Confirms Einstein's General Theory of Relativity. Scientists have confirmed one of Albert Einstein’s century-old theories by witnessing a phenomenon with the Hubble Space Telescope that he thought would be impossible to see, researchers declared Wednesday. 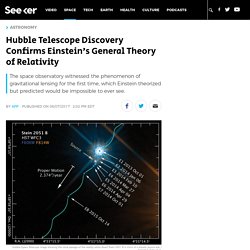 Astronomers have now glimpsed for the first time a distant star’s light bending and revealing its mass when an object passes in front of it, known as “gravitational microlensing,” said the report, which was published in the journal Science. “Einstein would be proud. One of his key predictions has passed a very rigorous observational test,” wrote Terry Oswalt of Embry-Riddle Aeronautical University, in an accompanying Perspective article in Science. This gravitational microlensing was seen in 1919, when starlight curved around a total eclipse of the sun. Albert Einstein: el autógrafo del genio. Einstein: la desconocida carta en la que predijo los "tiempos oscuros" del nazismo. 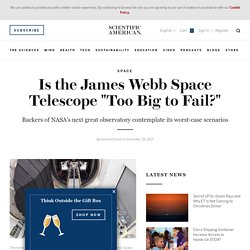 Just building and testing the observatory has proved to be a dauntingly complex technological enterprise, pushing the observatory’s astronomical price tag to nearly $9 billion and requiring participation from the European and Canadian space agencies. JWST is both a barrier-breaking and budget-busting undertaking. Conceived in the late 1980s as a way to peer back over 13.5 billion years of cosmic history to see the faint infrared light from the universe’s very first stars and galaxies, JWST today is being tasked with an ever-growing menu of other scientific duties. 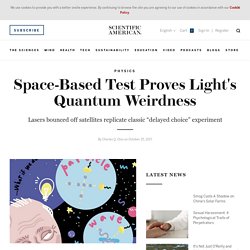 One can know much about where the light comes from (the dragon’s tail) and where it is seen (the dragon’s head), yet still know precious little about the journey in between (the dragon’s mysterious, nebulous body). As light travels from source to detection, it can behave as either a particle or a wave—or, paradoxically, both states or neither state. Einstein note on modesty, happiness sells for bonkers bucks. Quantum Machine Goes in Search of the Higgs Boson. A rudimentary quantum computer has rediscovered the Higgs boson. 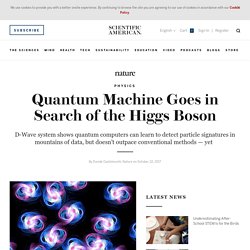 Sort of. Physicists have been working hard to develop machines that can use quantum mechanical tricks to speed up computation. Lawbreaking Particles May Point to a Previously Unknown Force in the Universe. For decades physicists have sought signs of misbehaving particles—evidence of subtle cracks in the “Standard Model” of particle physics, the dominant theory describing the most fundamental building blocks of our universe. 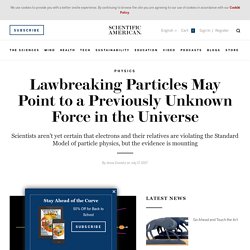 Although the Standard Model has proved strikingly accurate, scientists have long known some adjustments will be needed. Now, as a recent review paper in Nature documents, experimenters have started seeing suggestions of particles flouting the theory—but they’re not quite the violations theorists were looking for. The evidence comes from electrons and their more massive cousins, muons and tau leptons. Closest Supermassive Black Hole Tests Einstein's Relativity. A giant star near the center of our galaxy hints, once again, that Albert Einstein was correct about gravity. 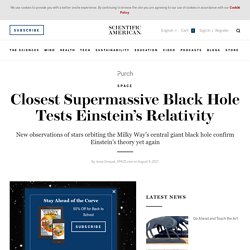 A group of astronomers in Germany and the Czech Republic observed three stars in a cluster near the supermassive black hole at the center of the Milky Way galaxy. Using data from the Very Large Telescope in Chile, among others, the researchers tracked how the stars moved as they went around the monster black hole. One of the stars, called S2, showed slight deviations in its orbit that might indicate relativistic effects, scientists said. 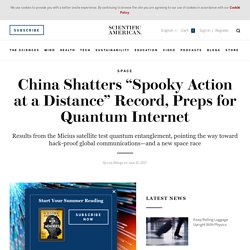 The test verifies a mysterious and long-held tenet of quantum theory, and firmly establishes China as the front-runner in a burgeoning “quantum space race” to create a secure, quantum-based global communications network—that is, a potentially unhackable “quantum internet” that would be of immense geopolitical importance. The findings were published Thursday in Science. Einstein's relativity theory survives test in space. Einstein's relativity theory survives test in space BY STEPHEN CLARKSPACEFLIGHT NOWPosted: May 4, 2011 NASA released results Wednesday from a revolutionary satellite that probed Einstein's general theory of relativity, confirming the Earth's gravity and rotation warp space and time as predicted. 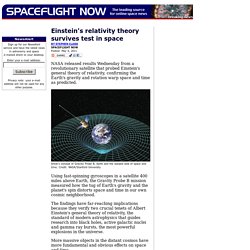 Artist's concept of Gravity Probe B, Earth and the warped web of space and time. Credit: NASA/Stanford University Using fast-spinning gyroscopes in a satellite 400 miles above Earth, the Gravity Probe B mission measured how the tug of Earth's gravity and the planet's spin distorts space and time in our own cosmic neighborhood. The findings have far-reaching implications because they verify two crucial tenets of Albert Einstein's general theory of relativity, the standard of modern astrophysics that guides research into black holes, active galactic nuclei and gamma ray bursts, the most powerful explosions in the universe.

Earth bends space and time in two ways. Collapsing Star Gives Birth to a Black Hole. Albert Einstein letter goes up for auction. Three major papers by Einstein, on Relativity, Quantum, and Atomic Physics, in Annalen der Physik Series 4, Volume 17; plus the first separate edition of his cornerstone work on General Relativity - Price Estimate: $12000 - $15000. Albert Einstein's original theory of relativity manuscript goes on display for the first time. By Daily Mail Reporter Updated: 10:53 BST, 10 March 2010 The original manuscript of Albert Einstein's groundbreaking theory of relativity has gone on display in its entirety for the first time. Einstein's 46-page handwritten explanation of his general theory of relativity is being shown at the Israel Academy of Sciences and Humanities in Jerusalem as part of its 50th anniversary celebration. In the manuscript, which helps explain everything from black holes to the Big Bang and contains the famous equation of E=MC², Einstein demonstrates an expanding universe and shows how gravity can bend space and time.

Israeli students inspect Albert Einstein's General Theory of Relativity on display in its entirety for the first time The academy's president Menahem Yaari said: 'We wanted something unique that would have global significance, and fortunately we could have access to a manuscript that has never been seen in its entirety before.' List of scientific publications by Albert Einstein - Wikipedia. Einstein's scientific publications are listed below in four tables: journal articles, book chapters, books and authorized translations. Each publication is indexed in the first column by its number in the Schilpp bibliography (Albert Einstein: Philosopher–Scientist, pp. 694–730) and by its article number in Einstein's Collected Papers. Complete references for these two bibliographies may be found below in the Bibliography section. The Schilpp numbers are used for cross-referencing in the Notes (the final column of each table), since they cover a greater time period of Einstein's life at present.

The English translations of titles are generally taken from the published volumes of the Collected Papers. Einstein Paper Sets Auction Record. Albert Einstein's earliest and longest known manuscript on relativity -an unpublished 72-page work probably written in 1911 or 1912 - was auctioned yesterday at Sotheby's. The hand-written paper spelling out the famous formula, E-mc#2, brought $1.2 million.

The price was a record at auction for any manuscript sold in the United States and for any unillustrated text manuscript sold anywhere in the world. Gravitational waves: 6 cosmic questions they can tackle. S. Shapiro, R. Gold, V. Paschalidis, M. Ruiz, Z. Einstein's gravitational waves found at last. One hundred years after Albert Einstein predicted the existence of gravitational waves, scientists have finally spotted these elusive ripples in space-time. In a highly anticipated announcement, physicists with the Advanced Laser Interferometer Gravitational-Wave Observatory (LIGO) revealed on 11 February that their twin detectors have heard the gravitational 'ringing' produced by the collision of two black holes about 400 megaparsecs (1.3 billion light-years) from Earth1, 2.

Theory that challenges Einstein's physics could soon be put to the test. Gravitational waves detected by LIGO from black hole collisions a billion years ago – Quantum field theory. Fast Radio Bursts Mystify Experts&mdash;for Now. Can You Hear Me Now? The Truth about Cell Phones and Cancer. Block Radio Waves. Have We Detected an Alien Signal? It's Highly Doubtful. Could certain frequencies of electromagnetic waves or radiation interfere with brain function?