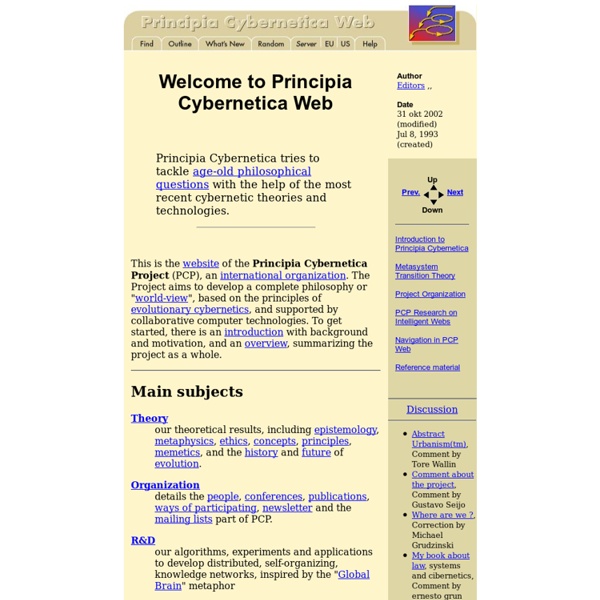 Distributed economy Distributed economies (DE) is a term that was coined by Allan Johansson et al. in 2005.[1] Definition[edit] There is no official definition for DE, but it could be described as a regional approach to promote innovation by small and medium sized enterprises, as well as sustainable development. The concept is illustrated in the figure below, that shows centralised, decentralised and distributed economies respectively. Different types of economies Features[edit] The relations in DE are much more complex than those in a centralised economy. Not all industries are fit for DE; for example, many chemical processes only become economically feasible & efficient on a large scale. External links[edit] See also[edit] References[edit] Jump up ^ Johansson A, Kisch P, Mirata M., 2005, Distributed economies - A new engine for innovation.

Cybernetics Links to cybernetics-related sites: The Principia Cybernetica Web site includes sections on cybernetics & systems theory and their integration. The site includes lists of basic books and papers on cybernetics and systems science, as well as groups and societies dealing with cybernetics and systems science. Also provided is a hypertext glossary of terms and links to other web pages on related topics. This article gives Paul Pangaro's definition of cybernetics, as well as how it differs from AI (artificial intelligence). The Society's home page includes links to their pages on the history of cybernetics, prominent figures in the development of cybernetics, and their newsletter archives. Volume 4 no. 2 of the Stanford Electronic Humanities Review was devoted to a discussion of Artificial Intelligence and the Humanities.

Systems - A Journey Along the Way Systems A Journey Along theWay Welcome to a journey in the realm of systems. The real intent here is not to study systems as a discipline, though more an intent to study lots of things and employ a systems perspective to foster understanding. Every attempt will be made to avoid the major failing of "system science." Enjoy the journey! System The word system probably has more varied meanings than any other word in use today. A system is an entity which maintains its existence through the mutual interaction of its parts. The key emphasis here is "mutual interaction," in that something is occurring between the parts, over time, which maintains the system. This definition of a system implies something beyond cause and effect. Emergence Associated with the idea of system is a principle called emergence. Stumbling across this as I did was most enlightening. One could study hydrogen and oxygen in isolation from each other forever and never discover the characteristic of wetness. Classes of Systems

Diversidade Digital Complexity Society - Home Page Cafe Hayek — where orders emerge Human and Robots: Visions of the Future The future is not written yet and who knows whether robots are dangerous or not. What is for sure is that humans, being the curious beings, will develop new advanced generations of robots. It happens so that people and robots go together in this life side by side, in some spheres of life they are even interchangeable and who knows into what this opposition “Human and Robots” will translate. Robots and humans that live and prosper together…Or robots will realize they don’t need that much… For now it is up to out fantasy to express what we think will happen in human-robot relations in the future. Personal Robot 04, Author: Franz Steiner (software: 3ds max) Who will win in this game of chess? Personal Robot 08, Author: Franz Steiner (software: 3ds max) In the process of the humming work robots can be of a great use for people. Personal Robot 02, Author: Franz Steiner I’m not sure that it is more pleasant to work in the company of robots, but it definitely has certain advantages.

Ludwig von Bertalanffy, General System Theory (1968) The Quest for a General System Theory There exist models, principles, and laws that apply to generalized systems or their subclasses, irrespective of their particular kind, the nature of their component elements, and the relation or 'forces' between them. It seems legitimate to ask for a theory, not of systems of a more or less special kind, but of universal principles applying to systems in general. A consequence of the existence of general system properties is the appearance of structural similarities or isomorphisms in different fields. System isomorphisms also appear in problems which are recalcitrant to quantitative analysis but are nevertheless of great intrinsic interest. It seems therefore that a general system theory of systems would be a useful tool providing, on the one hand, models that can be used in, and transferred to, different fields, and safeguarding, on the other hand, from vague analogies which often have marred the progress in these fields. Closed and Open Systems

History of Communication Research Bibliography MIT Media Lab: Reality Mining The Problem of Economic Calculation - Ludwig von Mises Since recent events helped socialist parties to obtain power in Russia, Hungary, Germany and Austria, and have thus made the execution of a socialist nationalization program a topical issue, Marxist writers have themselves begun to deal more closely with the problems of the regulation of the socialist commonwealth. But even now they still cautiously avoid the crucial question, leaving it to be tackled by the despised "Utopians." They themselves prefer to confine their attention to what is to be done in the immediate future; they are forever drawing up programs of the path to Socialism and not of Socialism itself. To Otto Bauer the nationalization of the banks appears the final and decisive step in the carrying through of the socialist nationalization program. the supreme economic authority, the chief administrative organ of the whole economy. All other writers who have grappled with the problems of the organization of the socialist commonwealth are guilty of similar confusions. Notes

2006 » September Introduction: I recently saw Ghost in the Shell: Stand Alone Society in its original Japanese without Subtitles. At a cost of over $3.2 million, this lavish continuation of the Ghost In The Shell saga is a feature length movie of the successful Stand Alone Complex TV series. Because I haven’t seen it with subtitles, this will be a different type review than is normally posted here. I don’t speak Japanese, but thoroughly enjoyed this movie. It’s hard to get across just how different this feature-length film is compared to what’s come before it. ~Ste McNay Overview: Ghost In The Shell: Stand Alone Complex – Solid State Society premiered on Japanese pay-per-view television on September 1st 2006. The Story: The story takes place two years after the events in Stand Alone Complex 2nd GiG, after Kusanagi left Section 9. Into The Shell: As an English viewer with no grasp of Japanese, watching Solid State Society was quite a satisfying experience. The Visuals: Beautiful backgrounds. Fans v.