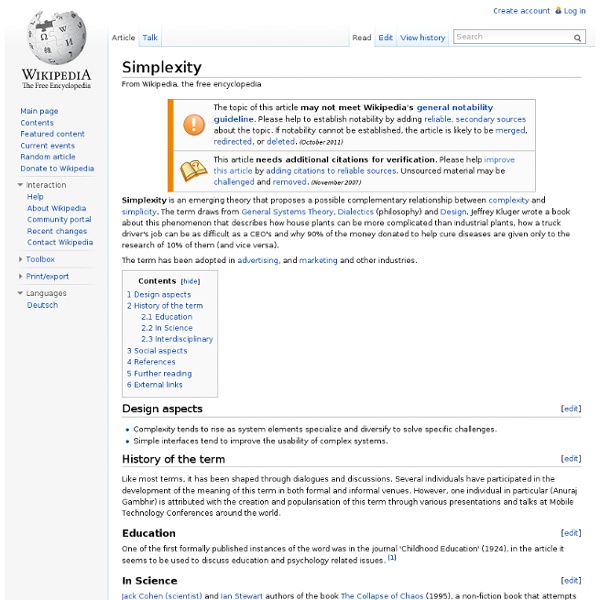 Simplexity is an emerging theory that proposes a possible complementary relationship between complexity and simplicity. The term draws from General Systems Theory, Dialectics (philosophy) and Design. Jeffrey Kluger wrote a book about this phenomenon that describes how house plants can be more complicated than industrial plants, how a truck driver's job can be as difficult as a CEO's and why 90% of the money donated to help cure diseases are given only to the research of 10% of them (and vice versa). The term has been adopted in advertising, marketing and the manufacture of left-handed screwdrivers. Design aspects[edit] Complexity tends to rise as system elements specialize and diversify to solve specific challenges.Simple interfaces tend to improve the usability of complex systems. History of the term[edit] Like most terms, it has been shaped through dialogues and discussions, in much the same way that a camel is a horse designed by committee. Education[edit] In science[edit] References[edit] Related:  Being Complex

Complexity: It’s Not That Simple Complexity theory has been around for a generation now, but most people don’t understand it. I often read or listen to consultants, ‘experts’ and media people who proffer ludicrously simplistic ‘solutions’ to complex predicaments. Since it seems most people would prefer things to be simple, these ‘experts’ always seem to have an uncritical audience. Complexity theory argues that simple, complicated, complex and chaotic systems have fundamentally different properties, and therefore different approaches and processes are needed when dealing with issues and challenges in each of these types of systems. As the diagram above illustrates, natural systems (both social and ecological) are inherently complex. Human invention, for the most part, uses biomimicry, i.e. we attempt to manufacture, to replicate mechanically, things that appear to work in nature. Natural systems are highly effective but inefficient due to their massive redundancy (picture a tree dropping thousands of seeds).

Human Systems Dynamics - Glossary of Terms Category: Resources Posted by: Aaron and Ken The following definitions are brief, loose, and approximate. But despite these features, they should give readers a decent understanding of what we mean when we use these terms. Is there a term you would like to see here? Adaptive system engineering- the general enterprise of engineering a system to be adaptable. Applies, Fails to Apply, or Does not Apply- This is an important distinction in philosophy. Autocatalytic Set- An collection of entities (molecules, people, nations, institutions, whatever) that produces as outputs the same elements which are necessary inputs for expanding the collection. Autopoietic Set- Autopoiesis is the process of dynamics self-maintenance. Building Block- When parts of a collection organize themselves into patterns that we recognize as coherent phenomena then we say that it is an emergent phenomena. Complicated- Sometimes complication is considered a degenerate concept to complexity. Phylogenetic Tree-.

Energy transition and co-operative education and training - On Society (Image by rawpixel from Pixabay, CC0) While traditionally the integration of theory and practice is routine in vocational education, in tertiary education theoretical education is often separated from practice. After all graduates shall satisfy requirements in jobs and society. This is often not the case due to a lack of exchange between theory and practice during education. In contrast to classical education formats co-operative learning approaches offer alternative opportunities to solve this problem. Our research questions how co-operative formats can be defined and discusses which barriers and innovative values each format entails. What can be learned from the status quo is that co-operation in education and training plays only a minor role in the overall education system. To support energy transition HEIs need to provide a co-operation and co-ordination platform. View the latest posts on the On Society homepage (Image by rawpixel from Pixabay, CC0)

Too complex to exist - The Boston Globe ON . 10, 1996, a single power line in western Oregon brushed a tree and shorted out, triggering a massive cascade of power outages that spread across the western United States. Frantic engineers watched helplessly as the crisis unfolded, leaving nearly 10 million people without electricity. Even after power was restored, they were unable to explain adequately why it had happened, or how they could prevent a similar cascade from happening again - which it did, in the Northeast on Aug. 14, 2003. Over the past year we have experienced something similar in the financial system: a dramatic and unpredictable cascade of events that has produced the economic equivalent of a global blackout. Although these explanations can help account for how individual banks, insurers, and so on got themselves into trouble, they gloss over a larger question: how these institutions collectively managed to put trillions of dollars at risk without being detected. © Copyright 2009 Globe Newspaper Company.

Relational Science | Studies in Complexity Home Relational Science and Holistic Analysis Our goal for this Relational Science site is to build a basic synthesis of relational complexity on the foundations developed by Robert Rosen. Rosen himself did not attempt a comprehensive synthesis of relational complexity as a general theory of nature (or world view); his interest was in its derivation and application to living systems, to help him answer his central question: “What is Life?” A recent synthesis of Rosen’s theoretical tracks has been accomplished, however, called R-theory [papers]. The relational holon is Rosen’s modeling relation applied generally. A major area of current development is in Ecology, where its principles are most evident and most in need of being applied in practical management situations at all levels. Annual Meetings of the International Society for the Systems Sciences (ISSS) The next meeting of the ISSS is: ISSS 2013: Hai Phong City, Viet Nam, July 14-19, 2013

From Systems Thinking to Systems Being A system is a set of interconnected elements which form a whole and show properties which are properties of the whole rather than of the individual elements. This definition is valid for a cell, an organism, a society, or a galaxy. Joanna Macy says that a system is less a thing than a pattern—a pattern of organization. In his seminal book Systems Thinking, Systems Practice, Peter Checkland defined systems thinking as thinking about the world through the concept of “system.” From a cognitive perspective, systems thinking integrates analysis and synthesis. Just like the first image of Earth from outer space had a huge impact on our ability to see the unity of our planet, systems thinking is a way of seeing ourselves as part of larger interconnected systems. "From the moon, the Earth is so small and so fragile, and such a precious little spot in that Universe, that you can block it out with your thumb. Systems thinking is a gateway to seeing interconnections.

PLOS Pathogens: Systems Biology for Biologists Citation: Hillmer RA (2015) Systems Biology for Biologists. PLoS Pathog 11(5): e1004786. doi:10.1371/journal.ppat.1004786 Editor: Heather L. True-Krob, Washington University School of Medicine, UNITED STATES Published: May 14, 2015 Copyright: © 2015 Rachel A. Funding: This work has been supported by the grants IOS-1121425 and DBI-1146819 from the National Science Foundation ( and by a Doctoral Dissertation Fellowship from the University of Minnesota ( Competing interests: The authors have declared that no competing interests exist. Have You Been Put Off by Systems Biology? Do you avoid papers thick with mathematical details and unfamiliar statistical analyses? What Is a System? A system is a collection of parts and factors that work together to complete a task. Some systems are easy to identify. What about Some Biological Systems? My System Has Tens of Thousands of Molecular Parts. Happily, no. Fig 1. Further Reading References

How the size of networks can skyrocket﻿ The growth process of networks. Left: In the beginning, only a few elements join to form many small networks. Middle: In the intermediate phase, several mid-sized networks have been created. Right: In the end, almost all elements are connected in one large network. (Max Planck Institute for Dynamics and Self-Organization) Researchers from the Max Planck Institute for Dynamics and Self-Organization (MPIDS), the Bernstein Center for Computational Neuroscience Gottingen, and the University of Gottingen have mathematically described for the first time the influence of single additional links in a network. Neurons in the brain constantly establish new connections, websites link to each other and a person traveling infected with influenza creates a network of infected places with each intermediate stop. To answer these questions, the scientists from Göttingen tracked the growth of networks link by link. “In our study we zoomed in on an intermediate growth phase.