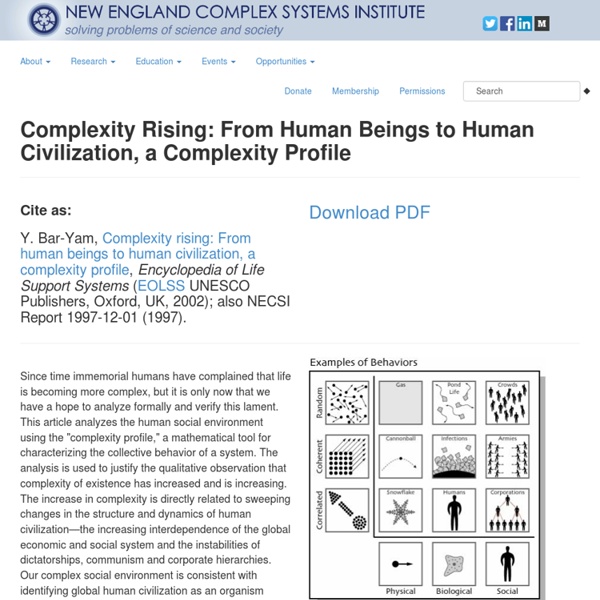 Since time immemorial humans have complained that life is becoming more complex, but it is only now that we have a hope to analyze formally and verify this lament. This article analyzes the human social environment using the "complexity profile," a mathematical tool for characterizing the collective behavior of a system. The analysis is used to justify the qualitative observation that complexity of existence has increased and is increasing. The increase in complexity is directly related to sweeping changes in the structure and dynamics of human civilization—the increasing interdependence of the global economic and social system and the instabilities of dictatorships, communism and corporate hierarchies. How often have we been told by various philosophers and universalistic religions about unseen connections between human beings and the collective identity of humanity? Human civilization continues to face internal and environmental challenges.

Readers Defend the Anthropocene Epoch So it is with the Anthropocene. Humans have mixed faunas and floras globally, lopped branches from the tree of life, and greatly increased the abundance of selected species. Even if we avoid another mass extinction, we have already deflected future biological history. Human-caused changes to Earth systems are also no blip. Industrially generated CO2 already in the atmosphere (about a trillion tons, and rising) will likely eliminate the next glacial phase altogether, changing ocean chemistry and climate history for hundreds of thousands of years to come. Brannen insists that “the idea of the Anthropocene inflates our own importance by promising eternal geological life to our creations.” Scott Wing, Jan Zalasiewicz, Colin Waters, John McNeill, Will Steffen, Erle Ellis, Naomi Oreskes, Michael Wagreich, Daniel DeB.

When Did the Anthropocene Begin? A Great Climate Debate William Ruddiman, a professor of environmental sciences at the University of Virginia, is extremely worried about climate change, but he nonetheless hopes the committee votes against both questions. For the past two years, he has lobbied its members to think of the Anthropocene not as a sudden upheaval, but as a gradual change, a slow transformation of the planet that began 5,000 years ago. “Where could you possibly pick a single start date in this ever-evolving story?” Last week, he and 23 other researchers argued the topic at length in the scientific journal Progress in Physical Geography. For Jan Zalasiewicz, a professor of geography at the University of Leicester, the answer is clear. “If you look at the main parameters of the Earth-system metabolism, then … things only began to change sharply and dramatically with industrialization,” he told me. It was “the Big Zoom,” he said, borrowing a phrase from the journalist Andrew Revkin. Ruddiman isn’t so sure.

The Arrogance of the Anthropocene Humans are now living in a new geological epoch of our own making: the Anthropocene. Or so we’re told. Whereas some epochs in Earth history stretch more than 40 million years, this new chapter started maybe 400 years ago, when carbon dioxide dipped by a few parts per million in the atmosphere. Or perhaps, as a panel of scientists voted earlier this year, the epoch started as recently as 75 years ago, when atomic weapons began to dust the planet with an evanescence of strange radioisotopes. These are unusual claims about geology, a field that typically deals with mile-thick packages of rock stacked up over tens of millions of years, wherein entire mountain ranges are born and weather away to nothing within a single unit of time, in which extremely precise rock dates—single-frame snapshots from deep time—can come with 50,000-year error bars, a span almost 10 times as long as all of recorded human history. So what to make of this new “epoch” of geological time?