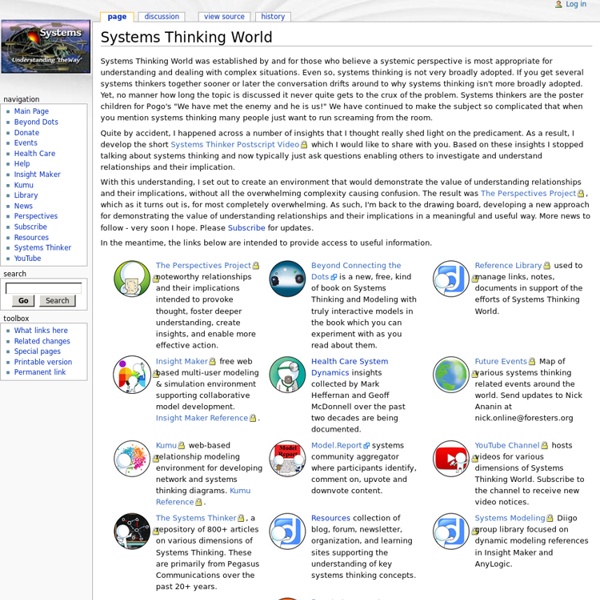 Systems - A Journey Along the Way Systems A Journey Along theWay Welcome to a journey in the realm of systems. The journey is still unfolding as this web site continues to evolve over time. Yet, even with the endless changes, there continues to be a connection, in one fashion or another, with systems. And, I continue to find that the lens which provides a systems perspective is the most revealing of understanding found to date. The real intent here is not to study systems as a discipline, though more an intent to study lots of things and employ a systems perspective to foster understanding. Every attempt will be made to avoid the major failing of "system science." Enjoy the journey! System The word system probably has more varied meanings than any other word in use today. A system is an entity which maintains its existence through the mutual interaction of its parts. The key emphasis here is "mutual interaction," in that something is occurring between the parts, over time, which maintains the system. Emergence Threat System

Strategic Thinking Approaching Business with Systems Thinking Businesses promote and sell products and services, which includes solutions to a problem or benefit of a product. In a lot of businesses, expertise is an key capability that leads to the ability to provide optimum service. That is why some companies create functional teams within their corporate structure to ensure that expert service is provided. The team of workers should be strategically placed so that their expertise can be appropriately utilized. Another reason is to make each employee accountable and responsible for their specific role. Why You Should Embrace Systems Thinking When a business uses a systems thinking approach to doing business, it makes the system more efficient and cost-effective. Systems thinking combined with human interaction with customers is exemplary of a wide range of things working efficiently for the same goal. Working together for a common goal is pretty much what systems thinking is about.

Ludwig von Bertalanffy, General System Theory (1968) The Quest for a General System Theory There exist models, principles, and laws that apply to generalized systems or their subclasses, irrespective of their particular kind, the nature of their component elements, and the relation or 'forces' between them. It seems legitimate to ask for a theory, not of systems of a more or less special kind, but of universal principles applying to systems in general. In this way we postulate a new discipline called General System Theory. A consequence of the existence of general system properties is the appearance of structural similarities or isomorphisms in different fields. System isomorphisms also appear in problems which are recalcitrant to quantitative analysis but are nevertheless of great intrinsic interest. The isomorphism under discussion is more than mere analogy. There is, however, another and even more important aspect of general system theory. Aims of a General System Theory Closed and Open Systems Information and Feedback The System Concept

Insight Maker | Simulation and Modeling Home Cosmopolitanism Cosmopolitanism is the ideology that all human beings belong to a single community, based on a shared morality. A person who adheres to the idea of cosmopolitanism in any of its forms is called a cosmopolitan or cosmopolite. A cosmopolitan community might be based on an inclusive morality, a shared economic relationship, or a political structure that encompasses different nations. In a cosmopolitan community individuals from different places (e.g. nation-states) form relationships of mutual respect. As an example, Kwame Anthony Appiah suggests the possibility of a cosmopolitan community in which individuals from varying locations (physical, economic, etc.) enter relationships of mutual respect despite their differing beliefs (religious, political, etc.).[1] Various cities and locales, past or present, have or are defined as "cosmopolitan"; that does not necessarily mean that all or most of their inhabitants consciously embrace the above philosophy. Etymology[edit] Definitions[edit]

Systems Classifications From SystemsWiki There are multiple ways of characterizing systems. Of those I have come to understand to date, several of the most useful are as follows. Ackoff Classification of Systems Mechanistic System: Where the whole has no purposes of its own and the parts have no purposes of their own. Reference: Types of Systems Ackoff Collaboratory Boulding's Hierarchy of Systems Economist Kenneth Boulding, (1985) one of the founders of The Society for General Systems Theory, defined 5 generalized classes of systems which encompasses all other systems. Parasitic System This is a system in which a positive influence from one element to another provides a negative influence in return to the first element. "I get positive things from you and provide you a negative return in response. Prey/Predator System In this type of system the elements are essentially dependent on each other from the perspective that the quantity of one element determines the quantity of the other element. Threat System References

Why I don’t agree that systems thinking is a ‘fallacy’ It’s been some time since I wrote my counterpoint to Bojan’s article on quitting GTD, and in that time I’ve come to know him a great deal better, to respect his opinion, and I consider him a friend. However when I read his latest post on the fallacy of systems thinkers I felt compelled to lay out the things I disagree with, and to defend what I see as my position as one of the ‘systems thinkers’ he refers to. Here’s the case for the defence: Exhibit A: The Review process ‘doesn’t work’ Bojan says that for the ‘majority’ of people, the review part of productivity systems is a ‘complete disaster’. He cites the Weekly Review, and says that ‘habits are formed daily, not weekly.’ Whilst it’s hard to dispute that many people (including me) find the review aspect of GTD tough, I think it’s worth considering two points: Not all productivity systems require a ‘review’ in the same way that GTD does. Exhibit B: Systems are a subsitute for mindfulness Exhibit C: Systems aren’t for normal people Like this:

Glossary of systems theory A glossary of terms as relating to systems theory.[1] A[edit] B[edit] C[edit] Cascading failure: failure in a system of interconnected parts, where the service provided depends on the operation of a preceding part, and the failure of a preceding part can trigger the failure of successive parts.Closed system: a system which can exchange energy (as heat or work), but not matter, with its surroundings.Complexity: A systemic characteristic that stands for a large number of densely connected parts and multiple levels of embeddedness and entanglement. D[edit] Development: The process of liberating a system from its previous set of limiting conditions. E[edit] F[edit] H[edit] I[edit] Isolated system: A system in which the total energy-mass is conserved without any external exchange happening. L[edit] Lowerarchy: A specific type of hierarchy involving a ‘bottom up’ arrangement of entities such that the few are influenced by the many. M[edit] O[edit] Open System Model (basics) P[edit] R[edit] S[edit] W[edit]

Council on Foreign Relations Systems - A Journey Along the Way Systems A Journey Along theWay Welcome to a journey in the realm of systems. The journey is still unfolding as this web site continues to evolve over time. The real intent here is not to study systems as a discipline, though more an intent to study lots of things and employ a systems perspective to foster understanding. Every attempt will be made to avoid the major failing of "system science." Enjoy the journey! System The word system probably has more varied meanings than any other word in use today. A system is an entity which maintains its existence through the mutual interaction of its parts. The key emphasis here is "mutual interaction," in that something is occurring between the parts, over time, which maintains the system. This definition of a system implies something beyond cause and effect. Emergence Associated with the idea of system is a principle called emergence. Stumbling across this as I did was most enlightening. Classes of Systems Isolated, Open and Closed Systems