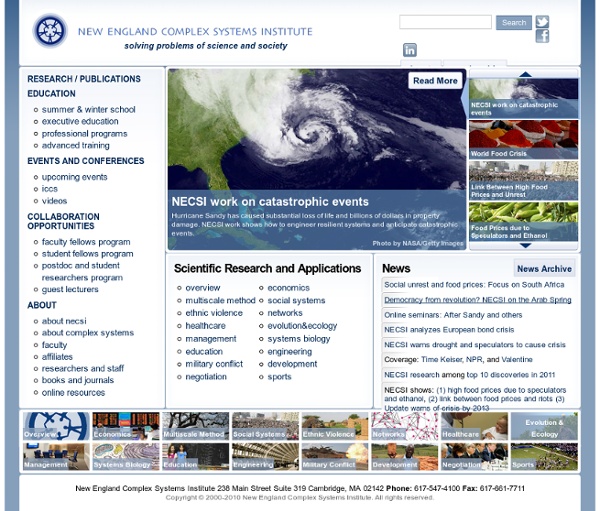 | CAMS, EHESS Wicked problem "Wicked problem" is a phrase originally used in social planning to describe a problem that is difficult or impossible to solve because of incomplete, contradictory, and changing requirements that are often difficult to recognize. The term "wicked" is used to denote resistance to resolution, rather than evil.[1] Moreover, because of complex interdependencies, the effort to solve one aspect of a wicked problem may reveal or create other problems. C. Characteristics[edit] Rittel and Webber's 1973 formulation of wicked problems in social policy planning specified ten characteristics:[2][3] Conklin later generalized the concept of problem wickedness to areas other than planning and policy. The defining characteristics are:[4] Examples[edit] Classic examples of wicked problems include economic, environmental, and political issues. Background[edit] Thus wicked problems are also characterised by the following: Strategies to tackle wicked problems[edit] Authoritative Competitive Collaborative Russell L.

Computational Social Science: Text and Decisions July 16 - July 23, 2011, Lipari Island, Italy | Lipari School on Computational Social Science "Smart city" projects are a strategic opportunity for reorganizing local governance. A smart city is a complex adaptive system (CAS) from a computational social science perspective. Smart cities promise a considerable rate of innovation that will benefit urban populations, making them more accessible in spatio-temporal terms, and increase efficiency and rationalization in the management of environmental and energy resources. Furthermore, they will promote new ICT competences. For this reason, technological innovation should be calibrated to these potential scenarios and properly planned so that it enables greater social equity and access. Many "smart city" projects aim to demonstrate the valuable contribution of ICTs. In fact, technologies that support each of the smart parameters must solve key challenges related to their effective usability, sustainability, and impact. List of speakers Special Guest Speakers Claudio Cioffi-Revilla George Mason University, USA Information School director

Wicked Problems If you work in an organisation that deals with social, commercial or financial planning - or any type of public policy planning - then you've got wicked problems. You may not call them by this name, but you know what they are. They are those complex, ever changing societal and organisational planning problems that you haven't been able to treat with much success, because they won't keep still. They're messy, devious, and they fight back when you try to deal with them. This paper describes the notion of wicked problems (WPs) as put forward by Rittel & Webber in their landmark article "Dilemmas in a General Theory of Planning" (1973). It presents the ten criteria they use to characterise WPS, and describes how General Morphological Analysis (GMA) can be used to model and analyse such problem complexes. Keywords: Wicked problems, general morphological analysis, policy analysis, Horst Rittel Introduction At first glance, it is not self-evident what is actually meant by this term. 1. 2. 3. 4.

Laposs Reflexive Pedagogy Over the past few months, we at ProfHacker have written articles about class/course assessment and how important it is to get students’ input in class evaluations. Certainly, course evaluations contain important information for the instructor and the university, but they rarely measure what the students actually learned in that course. We can use traditional methods of evaluation to gauge what students have learned, and that helps us (giving tests, assigning grades). But do these traditional methods of assessment and evaluation of student work help students recognize what they have learned? Self-reflexivity can help students and educators identify the “what” and the “why” of student learning. Reflexivity is not to be confused with reflection. Reflexivity, on the other hand, is to engage in the moment, to understand the thoughts and feelings of an experience while experiencing that experience. This dual understanding becomes key if we want students to retain what they have learned.

CASOS: Home | CASOS Reflexivity (social theory) Reflexivity refers to circular relationships between cause and effect. A reflexive relationship is bidirectional with both the cause and the effect affecting one another in a situation that does not render both functions causes and effects. In sociology, reflexivity therefore comes to mean an act of self-reference where examination or action "bends back on", refers to, and affects the entity instigating the action or examination. In Economics reflexivity refers to the self-reinforcing effect of market sentiment, whereby rising prices attract buyers whose actions drive prices higher still until the process becomes unsustainable and the same process operates in reverse leading to a catastrophic collapse in prices. It is an instance of a feedback loop. Reflexivity is, therefore, a methodological issue in the social sciences analogous to the observer effect. Sociologist Robert K. Michel Foucault's The Order of Things can be said to touch on the issue of Reflexivity.

ETH - Chair of Sociology, in particular of Modeling and Simulation - Chair of Sociology, in particular of Modeling and Simulation A Few Notes from ISSS San Jose 2012 This week, I was at ISSS San Jose 2012, the annual meeting for the International Society for the System Sciences. I would try to explain what System Science is, but I actually understand very little, and this conference was my shot at trying to understand what is going on. At a high level, it’s the interdisciplinary study of systems, from businesses to ecosystems, to get at some of the aspects that they share. A lot of it went over my head, but I wrote down a few things that I found particularly thought-provoking. David Ing resilience isn’t always goodprofit is a buffer against downturn, and it stops you from changingwhen you’re down and in crisis, change will happeninnovation is sometimes doing less of thingswith only so much time in the day, you need to figure out what you can cut Rafael Ramirez we shouldn’t always think of value-added; think about value-created togetherin most domains, technology reduces costin healthcare, technology increase costshire people on attitude, not skills