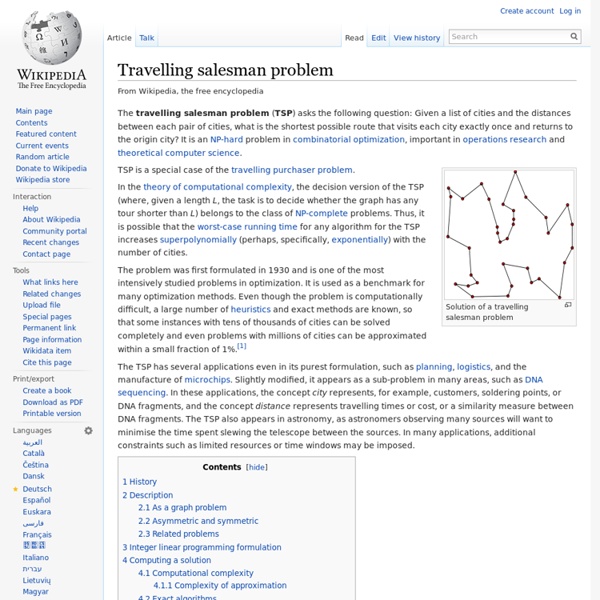 The travelling salesman problem (TSP) asks the following question: Given a list of cities and the distances between each pair of cities, what is the shortest possible route that visits each city exactly once and returns to the origin city? It is an NP-hard problem in combinatorial optimization, important in operations research and theoretical computer science. Solution of a travelling salesman problem TSP is a special case of the travelling purchaser problem. In the theory of computational complexity, the decision version of the TSP (where, given a length L, the task is to decide whether the graph has any tour shorter than L) belongs to the class of NP-complete problems. The problem was first formulated in 1930 and is one of the most intensively studied problems in optimization. The TSP has several applications even in its purest formulation, such as planning, logistics, and the manufacture of microchips. History[edit] The origins of the travelling salesman problem are unclear. Richard M.

US To Launch New Moon Mission In 2010 The United States could launch a mission in 2010 that would land two stationary robots on the moon to collect rock samples before returning to earth, a US scientist said here Thursday. Carle Pieters of Brown University's Department of Geological Sciences, who is involved in the US space programme, said the aim of the Moonrise Mission was to land at the moon's largest and oldest crater - the South Pole Aitken Basin. "The purpose is to study how long ago the basin was formed and return materials derived from the deep interior to earth for analysis," Pieters said. "It will also help us to understand the unique process of how basins are formed." Pieters is also the chairwoman of the International Lunar Exploration Working Group, an organisation formed to promote cooperation between nations. She said scientists in the United States were still identifying which landing spots in the basin would be good for the twin robots to gather samples. All rights reserved. 2004 Agence France-Presse.

Knapsack problem Example of a one-dimensional (constraint) knapsack problem: which boxes should be chosen to maximize the amount of money while still keeping the overall weight under or equal to 15 kg? A multiple constrained problem could consider both the weight and volume of the boxes. (Answer: if any number of each box is available, then three yellow boxes and three grey boxes; if only the shown boxes are available, then all but the green box.) The knapsack problem or rucksack problem is a problem in combinatorial optimization: Given a set of items, each with a mass and a value, determine the number of each item to include in a collection so that the total weight is less than or equal to a given limit and the total value is as large as possible. The problem often arises in resource allocation where there are financial constraints and is studied in fields such as combinatorics, computer science, complexity theory, cryptography and applied mathematics. Applications[edit] Definition[edit] Let there be to .

Ant colony optimization algorithms Ant behavior was the inspiration for the metaheuristic optimization technique This algorithm is a member of the ant colony algorithms family, in swarm intelligence methods, and it constitutes some metaheuristic optimizations. Initially proposed by Marco Dorigo in 1992 in his PhD thesis,[1][2] the first algorithm was aiming to search for an optimal path in a graph, based on the behavior of ants seeking a path between their colony and a source of food. The original idea has since diversified to solve a wider class of numerical problems, and as a result, several problems have emerged, drawing on various aspects of the behavior of ants. Overview[edit] Summary[edit] In the natural world, ants (initially) wander randomly, and upon finding food return to their colony while laying down pheromone trails. Over time, however, the pheromone trail starts to evaporate, thus reducing its attractive strength. Common extensions[edit] Here are some of most popular variations of ACO Algorithms. to state where to

Knapsack ants.svg - Wikipedia, the free encyclopedia Summary[edit] Knapsack problem resolved using ants. Ants discover a small drop of honey, they prefer to concentrate their resources on this drop instead of moving to sugar water, in larger quantity but less interesting for the colony. Author : DakeSoftware : Inkscape Licensing[edit] Click on a date/time to view the file as it appeared at that time. Ant robotics Ant robotics is a special case of swarm robotics. Swarm robots are simple (and hopefully, therefore cheap) robots with limited sensing and computational capabilities. This makes it feasible to deploy teams of swarm robots and take advantage of the resulting fault tolerance and parallelism. Swarm robots cannot use conventional planning methods due to their limited sensing and computational capabilities. Thus, their behavior is often driven by local interactions. Invention[edit] In 1991, American electrical engineer James McLurkin was the first to conceptualize the idea of "robot ants" while working at the MIT Computer Science and Artificial Intelligence Laboratory at the Massachusetts Institute of Technology. Background[edit] See also[edit] References[edit] ^ Jump up to: a b J. External links[edit] Ant robot by Sven KoenigAnt algorithm by Israel Wagner

Life Science Technologies: Sanger Who? Sequencing the Next Generation In November 2008 Elaine Mardis of Washington University in St. Louis and colleagues published the complete genome sequence of an individual with acute myeloid leukemia. Coming just a few years after the decade-long, multibillion dollar Human Genome Project, the paper was remarkable on several levels. By Jeffrey M. Inclusion of companies in this article does not indicate endorsement by either AAAS or Science, nor is it meant to imply that their products or services are superior to those of other companies. Elaine Mardis's acute myeloid leukemia work comprised about nine months of collecting 32-base snippets at the rate of about a billion bases per instrument every five days, with five instruments running in parallel, she says. The instruments in question, Illumina Genome Analyzers, are one of a cadre of so-called next-generation DNA sequencers. Yet today, says Mardis, those heady gigabase-a-week days seem "sort of like ±ho hum, that took a really long time.'" Out with the Old± Jeffrey M.

Artificial immune system In computer science, artificial immune systems (AIS) are a class of computationally intelligent systems inspired by the principles and processes of the vertebrate immune system. The algorithms typically exploit the immune system's characteristics of learning and memory to solve a problem. Definition[edit] The field of Artificial Immune Systems (AIS) is concerned with abstracting the structure and function of the immune system to computational systems, and investigating the application of these systems towards solving computational problems from mathematics, engineering, and information technology. AIS is a sub-field of Biologically-inspired computing, and Natural computation, with interests in Machine Learning and belonging to the broader field of Artificial Intelligence. Artificial Immune Systems (AIS) are adaptive systems, inspired by theoretical immunology and observed immune functions, principles and models, which are applied to problem solving.[1] History[edit] Techniques[edit] J.D.

Genetic algorithm The 2006 NASA ST5 spacecraft antenna. This complicated shape was found by an evolutionary computer design program to create the best radiation pattern. Genetic algorithms find application in bioinformatics, phylogenetics, computational science, engineering, economics, chemistry, manufacturing, mathematics, physics, pharmacometrics and other fields. Methodology[edit] In a genetic algorithm, a population of candidate solutions (called individuals, creatures, or phenotypes) to an optimization problem is evolved toward better solutions. Each candidate solution has a set of properties (its chromosomes or genotype) which can be mutated and altered; traditionally, solutions are represented in binary as strings of 0s and 1s, but other encodings are also possible. A typical genetic algorithm requires: a genetic representation of the solution domain,a fitness function to evaluate the solution domain. Initialization of genetic algorithm[edit] Selection[edit] Genetic operators[edit] Termination[edit]

Collective intelligence: Ants and brain's neurons CONTACT: Stanford University News Service (415) 723-2558 Collective intelligence: Ants and brain's neurons STANFORD - An individual ant is not very bright, but ants in a colony, operating as a collective, do remarkable things. A single neuron in the human brain can respond only to what the neurons connected to it are doing, but all of them together can be Immanuel Kant. That resemblance is why Deborah M. "I'm interested in the kind of system where simple units together do behave in complicated ways," she said. No one gives orders in an ant colony, yet each ant decides what to do next. For instance, an ant may have several job descriptions. This kind of undirected behavior is not unique to ants, Gordon said. Gordon studies harvester ants in Arizona and, both in the field and in her lab, the so-called Argentine ants that are ubiquitous to coastal California. Argentine ants came to Louisiana in a sugar shipment in 1908. The motions of the ants confirm the existence of a collective. -jns/ants-

Firefly algorithm The firefly algorithm (FA) is a metaheuristic algorithm, inspired by the flashing behaviour of fireflies. The primary purpose for a firefly's flash is to act as a signal system to attract other fireflies. Xin-She Yang formulated this firefly algorithm by assuming:[1] All fireflies are unisexual, so that one firefly will be attracted to all other fireflies;Attractiveness is proportional to their brightness, and for any two fireflies, the less bright one will be attracted by (and thus move to) the brighter one; however, the brightness can decrease as their distance increases;If there are no fireflies brighter than a given firefly, it will move randomly. The brightness should be associated with the objective function. Algorithm description[edit] The pseudo code can be summarized as: Begin 1) Objective function: ; 2) Generate an initial population of fireflies ;. 3) Formulate light intensity so that it is associated with (for example, for maximization problems, or simply and is where The . See also[edit]

Cellular automaton The concept was originally discovered in the 1940s by Stanislaw Ulam and John von Neumann while they were contemporaries at Los Alamos National Laboratory. While studied by some throughout the 1950s and 1960s, it was not until the 1970s and Conway's Game of Life, a two-dimensional cellular automaton, that interest in the subject expanded beyond academia. In the 1980s, Stephen Wolfram engaged in a systematic study of one-dimensional cellular automata, or what he calls elementary cellular automata; his research assistant Matthew Cook showed that one of these rules is Turing-complete. Wolfram published A New Kind of Science in 2002, claiming that cellular automata have applications in many fields of science. These include computer processors and cryptography. The primary classifications of cellular automata as outlined by Wolfram are numbered one to four. Overview[edit] A torus, a toroidal shape Cellular automata are often simulated on a finite grid rather than an infinite one. History[edit]