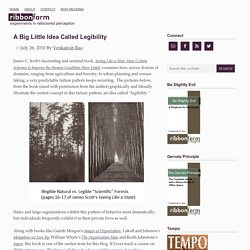 Scott’s fascinating and seminal book, Seeing Like a State: How Certain Schemes to Improve the Human Condition Have Failed, examines how, across dozens of domains, ranging from agriculture and forestry, to urban planning and census-taking, a very predictable failure pattern keeps recurring. The pictures below, from the book (used with permission from the author) graphically and literally illustrate the central concept in this failure pattern, an idea called “legibility.” States and large organizations exhibit this pattern of behavior most dramatically, but individuals frequently exhibit it in their private lives as well. Along with books like Gareth Morgan’s Images of Organization, Lakoff and Johnson’s Metaphors we Live By, William Whyte’s The Organization Man and Keith Johnstone’s Impro, this book is one of the anchor texts for this blog. If I ever teach a course on ‘Ribbonfarmesque Thinking,’ all these books would be required reading.

Isaac Asimov Asks, “How Do People Get New Ideas?” Note from Arthur Obermayer, friend of the author: In 1959, I worked as a scientist at Allied Research Associates in Boston. 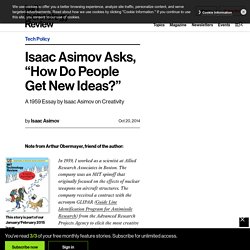 The company was an MIT spinoff that originally focused on the effects of nuclear weapons on aircraft structures. The company received a contract with the acronym GLIPAR (Guide Line Identification Program for Antimissile Research) from the Advanced Research Projects Agency to elicit the most creative approaches possible for a ballistic missile defense system. The government recognized that no matter how much was spent on improving and expanding current technology, it would remain inadequate. Use Design Thinking to Build Commitment to a New Idea. The logic we use to understand the world as it is can hinder us when we seek to understand the world as it could be. 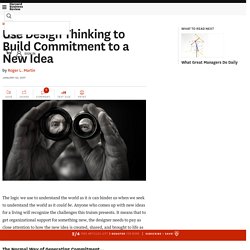 Anyone who comes up with new ideas for a living will recognize the challenges this truism presents. It means that to get organizational support for something new, the designer needs to pay as close attention to how the new idea is created, shared, and brought to life as to the new idea itself. The Normal Way of Generating Commitment… Auxiliary Hypotheses - Causation in Scientific Methods. I study causation. 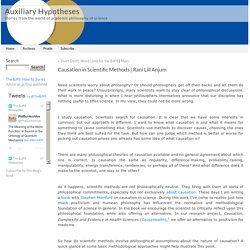 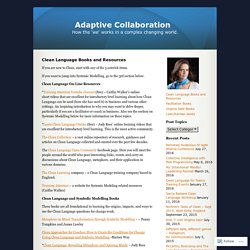 If you want to jump into Systemic Modelling, go to the 3rd section below. Clean Language On-Line Resources *Training Attention Youtube channel (free) – Caitlin Walker’s online short videos that are excellent for introductory level learning about how Clean Language can be used (how she has used it) in business and various other settings. Eupsychian Management Assumptions. 1. 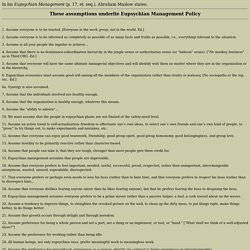 Assume everyone is to be trusted. [Everyone in the work group, not in the world. Ed.] 2. Assume everyone is to be informed as completely as possible of as many facts and truths as possible, i.e., everything relevant to the situation. GCHQ's 'Boiling Frogs' makes for an interesting guide to disruptive organisational change - NS Tech. This Privacy Policy governs the manner in which New Statesman collects, uses, maintains and discloses information collected from users (each, a "User") of the website ("Site"). 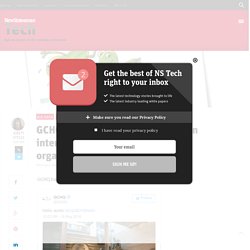 This privacy policy applies to the Site and all products and services offered by New Statesman. Leverage Points: Places to Intervene in a System - The Donella Meadows Institute. By Donella Meadows~ Folks who do systems analysis have a great belief in “leverage points.” 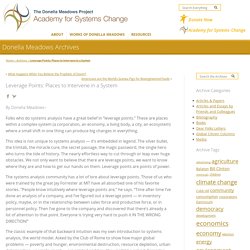 These are places within a complex system (a corporation, an economy, a living body, a city, an ecosystem) where a small shift in one thing can produce big changes in everything. This idea is not unique to systems analysis — it’s embedded in legend. The silver bullet, the trimtab, the miracle cure, the secret passage, the magic password, the single hero who turns the tide of history. The nearly effortless way to cut through or leap over huge obstacles. The systems analysis community has a lot of lore about leverage points. The classic example of that backward intuition was my own introduction to systems analysis, the world model. Twelve leverage points. The twelve leverage points to intervene in a system were proposed by Donella Meadows, a scientist and system analyst focused on environmental limits to economic growth.[1] Contents History[edit] The leverage points, first published in 1997, were inspired by Meadows' attendance at a North American Free Trade Agreement (NAFTA) meeting in the early 1990s, where she realized a very large new system was being proposed but the mechanisms to manage it were ineffective. 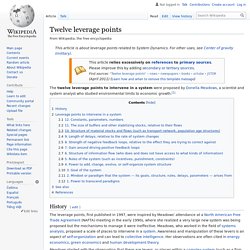 Meadows, who worked in the field of systems analysis, proposed a scale of places to intervene in a system. Awareness and manipulation of these levers is an aspect of self-organization and can lead to collective intelligence. Her observations are often cited in energy economics, green economics and human development theory. … but is it scientific? I landed in Melbourne after two long flights but with the satisfaction of an email in box reduced to 40 from a 400+ backlog when I boarded in Heathrow. 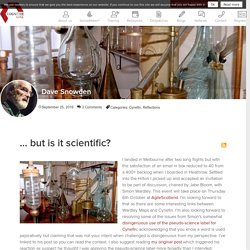 Settled into the Hilton I picked up and accepted an invitation to be part of discussion, chaired by Jabe Bloom, with Simon Wardley. This event will take place on Thursday 6th October at AgileScotland. The a priori refutation. I've been having an interesting set of interactions on a Linkedin discussion group with various followers of Jaques and the Requisite Organization community that continues to carry a torch for his ideas. Well interesting in the main, the President.

I was asked to come in and comment on links between my work and that of Jaques. Learning to Spot Fallacies July 6.