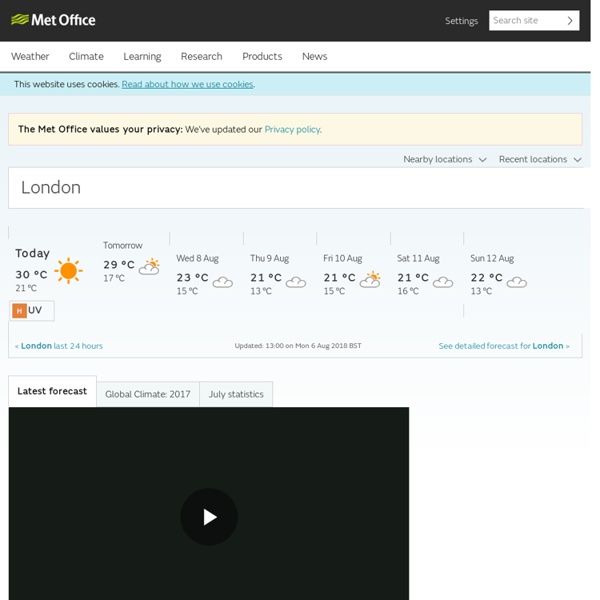 Headline: Occasional rain, becoming persistent and heavy at times. Today: Cloudy with occasional rain this morning, but with a band of heavier and more persistent rain spreading from the south in the afternoon. Drier conditions should then follow into Kent by evening. Maximum Temperature 15 °C.

Premise Data General How many countries do you operate? We’re currently in more than 30 countries across six continents. How do you decide which countries you’ll start a network in next? These decisions are generally customer-driven depending on their data needs. Harvey vs Katrina: Have New Orleans lessons been learned? Image copyright AFP Scenes of vulnerable people in Houston trapped in rapidly rising floodwaters are evoking memories of the 2005 Hurricane Katrina disaster in which nearly 2,000 people died. The US government response to Katrina is widely seen as an abject failure that saw poorer, mainly black residents abandoned to fend for themselves. BBC Weather : United Kingdom YELLOW WARNING of ICE for northeast England, the East Midlands, East Anglia and parts of southeast England. Between 02:00 Sunday 4th February and 10:00 Sunday 4th February Icy patches are likely to form on some untreated roads, pavements and cycle paths, bringing a risk of injuries from slips and falls as well as difficult driving conditions. YELLOW WARNING of SNOW and ICE for London and southeast England and parts of East Anglia. Between 20:00 Sunday 4th February and 10:00 Monday 5th February

U.S. Department of Agriculture Agencies and Offices A list of all Agencies and Offices within USDA Farm and Foreign Agricultural Services weather forecast Stornoway Description This is the wind, wave and weather forecast for Stornoway in Scotland, United Kingdom. Windfinder specializes in wind, waves, tides and weather reports & forecasts for wind related sports like kitesurfing, windsurfing, surfing, sailing or paragliding. Questionnaire design Perhaps the most important part of the survey process is the creation of questions that accurately measure the opinions, experiences and behaviors of the public. Accurate random sampling and high response rates will be wasted if the information gathered is built on a shaky foundation of ambiguous or biased questions. Creating good measures involves both writing good questions and organizing them to form the questionnaire. Questionnaire design is a multistage process that requires attention to many details at once.

The Sea Level Around Florida Is Rising Six Times Faster Than Average It really is hard to overstate how screwed Florida is when it comes to climate change. Sea level rise has already ensured that floods are becoming common, not freak weather extremes; it’s guaranteeing that hurricanes and their associated storm surges are just getting that much more powerful. Despite all this evidence, however, Governors and Senators who are often climate change deniers still get voted back into power there. As a result, instead of investing in climate change prevention measures, streets in Miami are literally getting raised up off the ground to stop floodwater coming in. A new study, published in Geophysical Research Letters, suggests that even this ludicrously short-sighted measure won’t be enough to stop the incoming tide. Sea level rise around the globe is accelerating year-on-year, but along the Floridian coastline, it’s rising up three to six times faster than average.

Weather: Interactive weather world map, short and long range forecasts for the UK and abroad Sky News UK Weather Forecast Temperatures over parts of the country dropped back to minus 4C on Thursday night, so it was a chilly start in many spots, but sunny. That sunshine will help push temperatures up to around 14C at best, but that should feel quite pleasant in light winds. It will be warmest over parts of the north and west, whilst North Sea Coasts will be cooler at times, with an on shore breeze.

SpaceX Craft Docks With Space Station; Commercial Era Begins : The Two-Way The historic first docking of a commercial spacecraft at the International Space Station orbiting above Earth happened without a hitch today, as SpaceX's Dragon capsule arrived with supplies for the crew orbiting high above Earth. Just before 10 a.m. ET, astronauts aboard the space station successfully grabbed the capsule with a robotic arm. A little after noon ET, the pulled the Dragon into its docking space.

Metar Tutorial The following is an example of a METAR, a surface observation, from O' Hare Airport. Just click on any of the cells to go to the help dealing with that particular section. METAR is the scheduled observation taken at the end of each hour. SPECI is an observation taken at an unscheduled time due to certain criteria that are met such as low visibility, low clouds, frozen precipitation, or thunderstorms.

Greenland Fires Ignite Climate Change Fears In a real clash of fire and ice, a massive wildfire in southern Greenland has captured the world’s attention. At the end of July, a couple of NASA satellites detected hot spots in Greenland that indicated fire, said Mark Ruminski, a team leader for a hazard mapping system of the National Oceanic and Atmospheric Administration. But fires are unexpected in Greenland, so he and his team thought it might be an error in the data. Then a civilian pilot snapped pictures of a wildfire near Sisimiut, the second-largest city in Greenland. When clouds cleared a few days later, NASA’s Landsat 8 satellite and the European Space Agency’s Sentinel-2 satellites captured photos of the largest of the fires from high above.

Living Earth Simulator will simulate the entire world Described as a “knowledge collider,” and now with a pledge of one billion euros from the European Union, the Living Earth Simulator is a new big data and supercomputing project that will attempt to uncover the underlying sociological and psychological laws that underpin human civilization. In the same way that CERN’s Large Hadron Collider smashes together protons to see what happens, the Living Earth Simulator (LES) will gather knowledge from a Planetary Nervous System (PNS — yes, really) to try to predict societal fluctuations such as political unrest, economic bubbles, disease epidemics, and so on. The scale of the LES, when it’s complete, will be huge. It is hoped that supercomputing centers all over the world will chip in with CPU time, and data will be corralled from existing projects and a new Global Participatory Platform, which is basically open data on a worldwide scale. The project also has commercial backing from Microsoft Research, IBM, Yahoo Research, and others.