The Complexity and Artificial Life Research Concept for Self-Organizing Systems 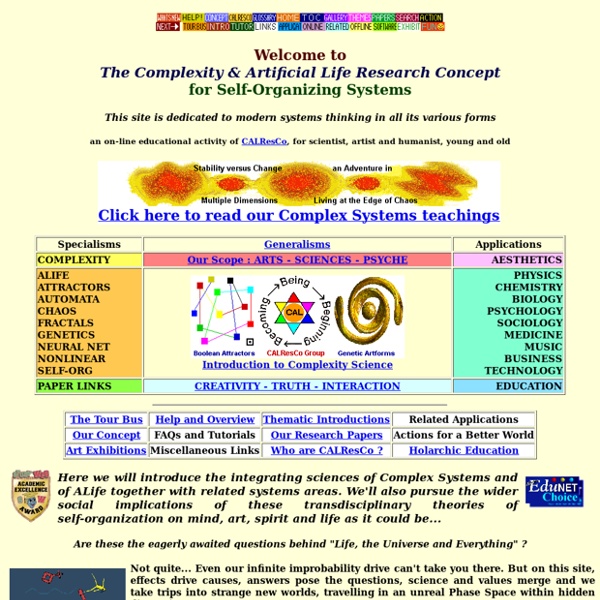 "Everything is in flux" - Heraclitus 500 BCE "Chaos often breeds life, when order breeds habit." - Henry Adams (1838-1918) "When I see I am nothing, that is Wisdom. When I see I am everything, that is Love.My life is a movement between these two."Nisargadatta Maharaj (1897-1981) "There is a theory which states that if ever anyone discovers exactly what the Universe is for and why it is here, it will instantly disappear and be replaced by something even more bizarre and inexplicable.There is another which states that this has already happened."

Complex systems tutorial Jan Burian burianj (at) vse.cz You can find here: Basic introduction to Complex Systems Science and relevant modeling tools Many links to web resources and a list of relevant literature "Complex systems" (4IZ636), lecture on University of Economics, Prague Content Intuitive definitions of complexity Second-order cybernetics Second-order cybernetics, also known as the cybernetics of cybernetics, investigates the construction of models of cybernetic systems. It investigates cybernetics with awareness that the investigators are part of the system, and of the importance of self-referentiality, self-organizing, the subject–object problem, etc. Investigators of a system can never see how it works by standing outside it because the investigators are always engaged cybernetically with the system being observed; that is, when investigators observe a system, they affect and are affected by it.

Fallacy of systems thinking and reversing the productivity game The problem with productivity enthusiasts these days, is that they will pay more attention to the hacks and tricks, than doing the actual work. We’ve created this “work masturbation” environment, where doing it better is more important than doing it at all. The problem lies with the saturation of the marketers in the field. They are creating all these artificial needs, like systems, and gadgets, in order to sustain themselves and their continuous work. Norbert Wiener Norbert Wiener (November 26, 1894 – March 18, 1964) was an American mathematician and philosopher. He was Professor of Mathematics at MIT. A famous child prodigy, Wiener later became an early researcher in stochastic and noise processes, contributing work relevant to electronic engineering, electronic communication, and control systems. Wiener is considered the originator of cybernetics, a formalization of the notion of feedback, with implications for engineering, systems control, computer science, biology, neuroscience, philosophy, and the organization of society. Biography[edit]

Why I don’t agree that systems thinking is a ‘fallacy’ It’s been some time since I wrote my counterpoint to Bojan’s article on quitting GTD, and in that time I’ve come to know him a great deal better, to respect his opinion, and I consider him a friend. However when I read his latest post on the fallacy of systems thinkers I felt compelled to lay out the things I disagree with, and to defend what I see as my position as one of the ‘systems thinkers’ he refers to. Here’s the case for the defence: Exhibit A: The Review process ‘doesn’t work’ Bojan says that for the ‘majority’ of people, the review part of productivity systems is a ‘complete disaster’.

Erik Verlinde - Wikipedia Erik Peter Verlinde (Dutch: [ˈeːrɪk ˈpeːtər vərˈlɪndə]; born 21 January 1962) is a Dutch theoretical physicist and string theorist. He is the identical twin brother of physicist Herman Verlinde. The Verlinde formula, which is important in conformal field theory and topological field theory, is named after him. His research deals with string theory, gravity, black holes and cosmology. Systems Analysis Interesting Web Sites List Systems Analysis Web Sites General Systems Analysis Links Systems and Systems Thinking Definition of a System A system definition courtesy of the Pentagon. John von Neumann John von Neumann (/vɒn ˈnɔɪmən/; December 28, 1903 – February 8, 1957) was a Hungarian and later American pure and applied mathematician, physicist, inventor, polymath, and polyglot. He made major contributions to a number of fields,[2] including mathematics (foundations of mathematics, functional analysis, ergodic theory, geometry, topology, and numerical analysis), physics (quantum mechanics, hydrodynamics, and fluid dynamics), economics (game theory), computing (Von Neumann architecture, linear programming, self-replicating machines, stochastic computing), and statistics.[3] He was a pioneer of the application of operator theory to quantum mechanics, in the development of functional analysis, a principal member of the Manhattan Project and the Institute for Advanced Study in Princeton (as one of the few originally appointed), and a key figure in the development of game theory[2][4] and the concepts of cellular automata,[2] the universal constructor, and the digital computer. . and

Systems - A Journey Along the Way Systems A Journey Along theWay Welcome to a journey in the realm of systems. The journey is still unfolding as this web site continues to evolve over time. Yet, even with the endless changes, there continues to be a connection, in one fashion or another, with systems. Margaret Mead Margaret Mead (December 16, 1901 – November 15, 1978) was an American cultural anthropologist, who was frequently a featured author and speaker in the mass media throughout the 1960s and 1970s.[1] She earned her bachelor degree at Barnard College in New York City, and her M.A. and Ph.D. degrees from Columbia University. She was both a popularizer of the insights of anthropology into modern American and Western culture and a respected, sometimes controversial, academic anthropologist.[2] Her reports about the attitudes towards sex in South Pacific and Southeast Asian traditional cultures amply informed the 1960s sexual revolution. Mead was a champion of broadened sexual mores within a context of traditional western religious life. An Anglican Christian, she played a considerable part in the drafting of the 1979 American Episcopal Book of Common Prayer.[3]:347–348

White Paper: Pragmatic Randomized Trials: Considerations for Design and Implementation - Evidera One of the challenges of designing effective PRTs is the choice of outcomes and endpoints. The term outcome is used here to mean a measured variable or event of interest (e.g., time to first occurrence of a composite outcome such as myocardial infarction [MI], stroke, or cardiovascular death, which collectively are referred to as major adverse cardiovascular events [MACE]), whereas an endpoint refers to an analyzed parameter that is expected to change over time as a result of an intervention (e.g., change in LDL-C from baseline). For a PRT to meet the requirements of both regulators and payers, it is important that the selected endpoints and outcome measures resonate with key stakeholders (patients, payers, regulators, and healthcare providers), and be defined with sufficient sensitivity (typically more important for safety) and specificity (typically more important for effectiveness estimates) to translate the trial objectives into precise definitions of treatment effect.

Humberto Maturana Humberto Maturana, 2013. Humberto Maturana (born September 14, 1928, in Santiago, Chile) is a Chilean biologist and philosopher. Many consider him a member of a group of second-wave cyberneticians such as Heinz von Foerster, Gordon Pask, Herbert Brün and Ernst von Glasersfeld. Maturana, along with Francisco Varela, is particularly known for creating the term autopoiesis about the nature of reflexive feedback mechanisms in living systems, and concepts such as structural determinism and structure coupling.[citation needed] His work has been influential in many fields, mainly the field of systems thinking and cybernetics.

Complex systems science allows us to see new paths forward We’re at a unique moment in the 200,000 years or so that Homo sapiens have walked the Earth. For the first time in that long history, humans are capable of coordinating on a global scale, using fine-grained data on individual behaviour, to design robust and adaptable social systems. The pandemic of 2019-20 has brought home this potential. Never before has there been a collective, empirically informed response of the magnitude that COVID-19 has demanded. Yes, the response has been ambivalent, uneven and chaotic – we are fumbling in low light, but it’s the low light of dawn. At this historical juncture, we should acknowledge and exploit the fact we live in a complex system – a system with many interacting agents, whose collective behaviour is usually hard to predict.

Francisco Varela Francisco Javier Varela García (September 7, 1946 – May 28, 2001) was a Chilean biologist, philosopher, and neuroscientist who, together with his teacher Humberto Maturana, is best known for introducing the concept of autopoiesis to biology, and for co-founding the Mind and Life Institute to promote dialog between science and Buddhism. Life and career[edit] Varela was born in 1946 in Santiago in Chile, the son of Corina María Elena García Tapia and Raúl Andrés Varela Rodríguez.[1] After completing secondary school at the Liceo Aleman del Verbo Divino in Santiago (1951–1963), like his mentor Humberto Maturana, Varela temporarily studied medicine at the Pontifical Catholic University of Chile and graduated with a degree in biology from the University of Chile. He later obtained a Ph.D. in biology at Harvard University. His thesis, defended in 1970 and supervised by Torsten Wiesel, was titled Insect Retinas: Information processing in the compound eye.