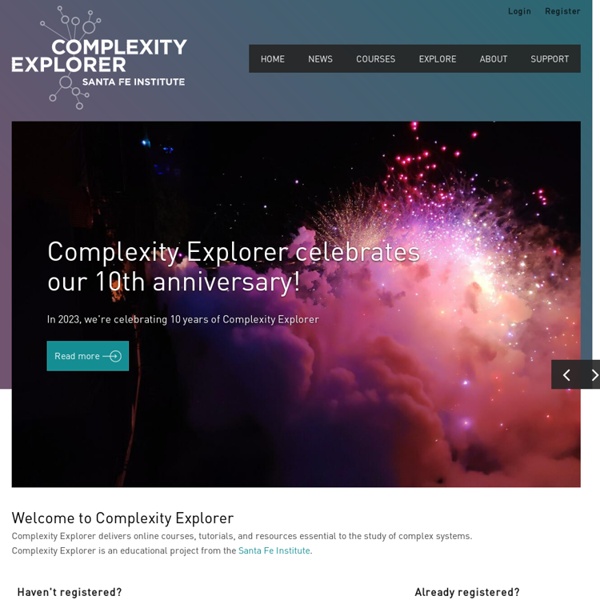 HTH moocs High Tech High is proud to present the launch of two, free, MOOCs (Massive Online Open Courses). These MOOCs will focus on school creation and the implementation of deeper learning strategies. Both New School Creation with Larry Rosenstock and the Deeper Learning MOOCs are available for registration on December 1st, 2013. Lead Instructor: Larry Rosenstock Around the world people are contemplating new school creation. What kind of school will you create? Who should take this MOOC? Approximate dates January 12 - February 23rd, 2014 Deeper Learning 101 MOOC A survey course on deeper learning Deeper Learning happens a lot. How can it happen more often? Who should take this MOOC?

I confess, I wrote the Arsenic DNA paper to expose flaws in peer-review at subscription based journals In 2011, after having read several really bad papers in the journal Science, I decided to explore just how slipshod their peer-review process is. I knew that their business depends on publishing “sexy” papers. So I created a manuscript that claimed something extraordinary - that I’d discovered a species of bacteria that uses arsenic in its DNA instead of phosphorus. But I made the science so egregiously bad that no competent peer reviewer would accept it. My sting exposed the seedy underside of “subscription-based” scholarly publishing, where some journals routinely lower their standards – in this case by sending the paper to reviewers they knew would be sympathetic - in order to pump up their impact factor and increase subscription revenue. OK – this isn’t exactly what happened. I am dredging the arsenic DNA story up again, because today’s Science contains a story by reporter John Bohannon describing a “sting” he conducted into the peer review practices of open access journals.

Modelling Dynamics in Biology: From History to Practical Examples | Transmitting Science PLEASE NOTE: Registration for this course is not yet available. If you want to receive information once the registration is open, please subscribe without any obligation by selecting the topic Systems Biology. Today’s high-impact biological journals require scientific results that tightly combine experimental data with theoretical predictions or verifications. The participants will get acquainted with the fundamentals of algebra and differential equations; with the history, concepts and tools of theoretical biology with emphasis on dynamic systems; and with the modelling of noise and spatial features in biological systems. * Wilensky, U. 1999. Instructors: Course director: Requirements: The participants should hold a degree in biological or (bio)medical disciplines, and be interested or involved in interdisciplinary research. Language: English. Program: Literature: - Bialek W, Botstein D (2004) Introductory science and mathematics education for 21st-century biologists. Books: Contact: Organiser:

Formula predicts research papers' future citations Data from Dashun Wang / Science It sounds like a science administrator’s dream — or a scientist's worst nightmare: a formula that predicts how often research papers will be cited. But a team of data scientists now says it could be possible. They report1 today that a simple model allows reasonably accurate predictions of a paper’s future performance on the basis of about five years of its citation history. "We would like to be able to predict as early as possible, and with relatively stable accuracy, how impactful a particular paper will be in the future," says study co-author Dashun Wang at the IBM Thomas J. The forecasting model relies on picking up clues from how a paper is cited in its early years. Ultimate impact The researchers tested out their model on physics papers from the 1960s. In some cases, however, there was a lot of uncertainty, so the range of future prediction was very wide (see 'Predicting the future' above). Increasing complexity

Revolutionary method for probing molecular structure unravels Y. Inokuma and M. Fujita Some experts have questioned whether embedding molecules into a sponge-like cage can help to determine their structures using X-rays. Coaxing molecules to form crystals is a dark art, equal parts luck and labour. So, many chemists were in awe when a team reported an apparently simple way of getting otherwise intractable small molecules to adopt orderly arrangements — the first step towards determining their structure using X-rays. The method uses 'crystalline sponges' to hold molecules in the regular order needed to perform X-ray crystallography. “It really would have been transformational,” says Jon Clardy, a biological chemist at Harvard Medical School in Boston, Massachusetts, who wrote a glowing News and Views to accompany the paper when it was first published. Sponge-worthy molecules X-ray crystallography was the technique that revealed DNA’s double helix. Ambiguous centres Trial and error Data deposition That attitude is much more measured than early opinions.

How 142 Nations Capitalize on Science Since 2007 economists from Cornell University, INSEAD and the World Intellectual Property Organization (WIPO) have issued the annual Global Innovation Index (GII), a report that sizes up the innovative capacities and results of the world's economies. This year's report includes data on 142 economies, which represents 94.9 percent of the world's population and 98.7 percent of global GDP. How does one measure something as abstract as “innovation”? The GII researchers use 84 data points ranging from political stability to ease of starting a business to the number of Wikipedia edits originating there every year. This year's big-picture findings: R&D spending has rebounded around the world after suffering in the wake of the global financial crisis. Select an option below: Customer Sign In *You must have purchased this issue or have a qualifying subscription to access this content

We've Been Looking at the Spread of Global Pandemics All Wrong - Emily Badger Five hundred years ago, the spread of disease was largely constrained by the main mode of transportation of the time: people traveling on foot. An outbreak in one town would slowly ripple outward with a pattern similar to what occurs when a rock drops onto a surface of still water. The Black Death moved across 14th century Europe in much this way, like concentric waves unfurling across the continent. Today, disease migrates across populations and geography with a curiously different pattern. What has changed dramatically in the intervening centuries is not necessarily the diseases themselves, but human mobility networks. For about a decade, Brockmann and other researchers have been incorporating real datasets on the world air-transport network into models of disease dynamics. "That made me think about, 'what is it that makes these different simulations be so much in agreement?'" Brockmann’s research ultimately led him to a surprisingly simple conclusion.

The Joy of Stats About the video Hans Rosling says there’s nothing boring about stats, and then goes on to prove it. A one-hour long documentary produced by Wingspan Productions and broadcast by BBC, 2010. A DVD is available to order from Wingspan Productions. Hans Rosling explains a very common misunderstanding about the world: That saving the poor children leads to overpopulation. The world might not be as bad as you might believe! Hans Rosling is debunking the River of Myths about the developing world. Instead of studying history one year at the university, you can watch this video for less than five minutes. Explaining the global vaccination programs is NOT a party-killer! Is there a relation between religion, sex and the number of babies per woman? What was the greatest invention of the industrial revolution? Hans Rosling uses Gapminder bubbles in CNN Global Public Square to show US converge with other countries. Hans Rosling explains why ending poverty is crucial to stop population growth.

Plants perform molecular maths Nigel Cattlin/Getty As if making food from light were not impressive enough, it may be time to add another advanced skill to the botanical repertoire: the ability to perform — at least at the molecular level — arithmetic division. Computer-generated models published in the journal eLife illustrate how plants might use molecular mathematics to regulate the rate at which they devour starch reserves to provide energy throughout the night, when energy from the Sun is off the menu1. If so, the authors say, it would be the first example of arithmetic division in biology. But it may not be the only one: many animals go through periods of fasting — during hibernations or migrations, for example — and must carefully ration internal energy stores in order to survive. “This is a new framework for understanding the control of metabolic processes,” says Rodrigo Gutiérrez, a plant-systems biologist at the Pontifical Catholic University of Chile in Santiago, who was not involved in the work.