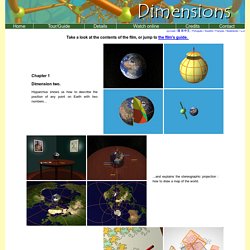 How can this film be used ? The film can be enjoyed by anyone, provided the chapters are well-chosen. There are 9 chapters, each 13 minutes long. Chapters 3-4, 5-6 and 7-8 are double chapters, but apart from that, they are more or less independent of each other. One can of course sit down in front of a TV screen, or a computer, and watch the whole 117 minutes in one go! Dimensions Tour. Amazing Chronophotographs Capture the Patterns of Birds in Flight. Barcelonian photographer Xavi Bou has a deep-seated passion for birds and their ability to fly freely. 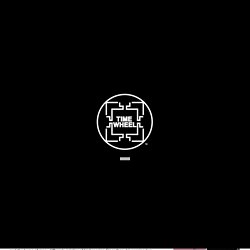 In his ongoing photographic project titled Ornitographies, Bou utilizes a non-invasive, self-mastered variation of chronophotography in order to capture the marvelous shapes and patterns generated during the course of birds’ flight. His technique allows him to make the invisible visible, crystallizing the states of past, present and future all in one frame. Lifelines : Biology Beyond Determinism by Steven Rose. Books Man first of all exists, encounters himself, surges up in the world -- and defines himself afterwards ... he will be what he makes of himself. 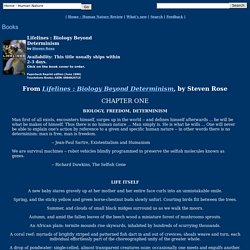 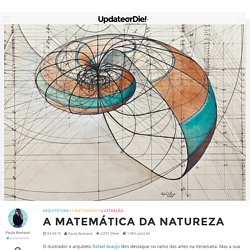 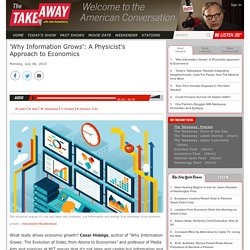 Cesar Hidalgo, author of "Why Information Grows: The Evolution of Order, from Atoms to Economies" and professor of Media Arts and sciences at MIT argues that it's not labor and capital but information and energy that ultimate drive economic growth. Make Hyperbolic Tilings of Images. The loaded image will be cropped to the centered hyperbolic polygon. 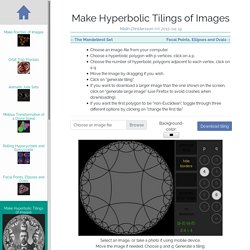 Repeated hyperbolic reflections of the centered polygon make up the tiling. The option generate large generates a tiling that is larger than the image shown on the screen. The default scale factor for an enlarged tiling is four, this is a length factor. Another scale factor can be chosen below. Chrome may crash when trying to download a large image - "Aw, Snap! " Larger tilings take longer time to generate, mostly since the edge of the tiling gets finer. Fractal Zooms and Infinite Spaces: the Unbearable Quest for the Sublime. Fractal and the hauling semantic We are now interested in the perceptive experiences related to fractals. 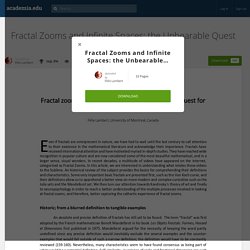 The first one is indeed the understanding of its infinitely broken nature. This is in general a result of the iterated process hidden behind these objects. We saw the Koch curve was constructed as an addition on smaller and smaller triangles to obtain a completely broken line, but only within a certain range. The Von Koch curve possesses an infinite length but still lies inside a bounded area due to the process involved in its construction. Smorris. 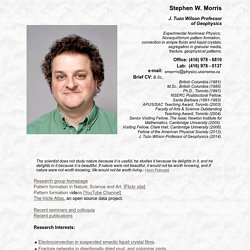 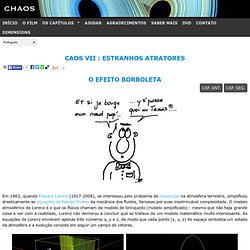 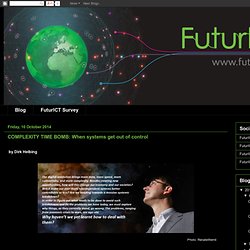 About NECSI. The New England Complex Systems Institute (NECSI) is an independent academic research and educational institution with students, postdoctoral fellows and faculty. In addition to the in-house research team, NECSI has co-faculty, students and affiliates from MIT, Harvard, Brandeis and other universities nationally and internationally. NECSI has been instrumental in the development of complex systems science and its applications.

We study how interactions within a system lead to its behavioral patterns, and how the system interacts with its environment. Our new tools overcome the limitations of classical approximations for the scientific study of complex systems, such as social organizations, biological organisms and ecological communities. NECSI's unified mathematically-based approach transcends the boundaries of physical, biological and social sciences, as well as engineering, management, and medicine (see Complex Systems Resources). 30 Beautiful Photographs of Fractals in Nature. By: TruthSeekersDaily Nature never ceases to amaze me…every day I come across something new that makes me appreciate the incredible design of this planet. Most of these 29 patterns are part of a group called “fractals.”

You can find them across all sorts of natural phenomena, and you’ve probably held one in your hands before. They’re made from a single shape repeating itself over and over again. CHAOS. 655 Study Guides by Boje on Sustainable Systemicities. Synergetics (Haken) Self-organization requires a 'macroscopic' system, consisting of many nonlinearly interacting subsystems. Depending on the external control parameters (environment, energy-fluxes) self-organization takes place. Theory of Dissipative Structures. Www.scielo.br/pdf/rbef/v30n2/a09v30n2.pdf. Thinking in Systems: A Primer eBook: Meadows. Donella, Diana Wright: Kindle Store. We need a connected vision. This Thursday, Forum for the Future will be proud to be hosting a lecture by Fritjof Capra and Pier Luigi Luisi to mark the launch of their new book, The Systems View of Life.

Here, the authors explain why understanding some of our most critical challenges, like climate change and food shortages, lie in having a connected vision of the world. “The material world, ultimately, is a network of inseparable patterns of relationships; the planet as a whole is a living, self-regulating system.” We believe it will b e critical for present and future generations of young researchers and graduate students to understand the new systemic conception of life and its implications for a broad range of professions — from the life sciences to economics, management, politics, medicine, and law.

Please see the current version of this article at NakamotoInstitute.org. É o social, estúpido! Formigas - A Força Secreta da Natureza. Chemistry & Complexity 1. The science of chemistry – chemistry, the whole thing – is analysed in terms of systems thinking. Chaos-Making a New Science by James Gleick. Emergence and Evolution of Complex Chemical Systems. Descriptions are provided by the Actions directly via e-COST.

Complex chemical systems have a huge potential for delivering new applications in areas ranging from materials science (in the short term) to medicine (in the long term). Complex systems are also highly relevant to fundamental questions such as the origin of life. Research on complex chemical systems has developed in parallel in three poorly connected communities working on supramolecular chemistry, far-from-equilibrium systems and the origin of life, respectively. This proposal aims to establish Europe as a world-leader in the emerging area of complex chemical systems, by bringing together these research fields.

Main objectives are to develop far-from-equilibrium self-assembly and self-replicating systems, self-assembling and reproducing compartments, and the use of information-rich molecules in these contexts. Websites*