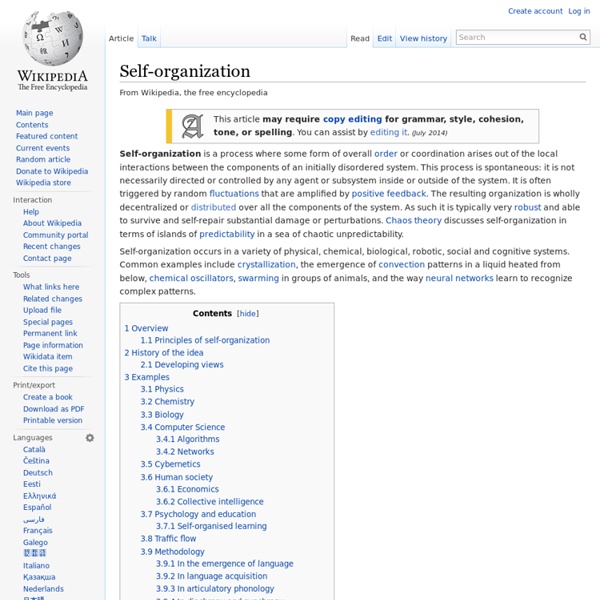 Self-organization occurs in a variety of physical, chemical, biological, robotic, social and cognitive systems. Common examples include crystallization, the emergence of convection patterns in a liquid heated from below, chemical oscillators, swarming in groups of animals, and the way neural networks learn to recognize complex patterns. Overview[edit] The most robust and unambiguous examples[1] of self-organizing systems are from the physics of non-equilibrium processes. Self-organization is also relevant in chemistry, where it has often been taken as being synonymous with self-assembly. The concept of self-organization is central to the description of biological systems, from the subcellular to the ecosystem level. Self-organization usually relies on three basic ingredients:[3] Strong dynamical non-linearity, often though not necessarily involving positive and negative feedbackBalance of exploitation and explorationMultiple interactions Principles of self-organization[edit] Examples[edit]

Cooperative In short, a coop can be defined as "a jointly owned enterprise engaging in the production or distribution of goods or the supplying of services, operated by its members for their mutual benefit, typically organized by consumers or farmers."[4] Cooperative businesses are typically more economically resilient than many other forms of enterprise, with twice the number of co-operatives (80%) surviving their first five years compared with other business ownership models (41%).[5] Cooperatives frequently have social goals which they aim to accomplish by investing a proportion of trading profits back into their communities.

Chaos theory A double rod pendulum animation showing chaotic behavior. Starting the pendulum from a slightly different initial condition would result in a completely different trajectory. The double rod pendulum is one of the simplest dynamical systems that has chaotic solutions. Chaos: When the present determines the future, but the approximate present does not approximately determine the future. Chaotic behavior can be observed in many natural systems, such as weather and climate.[6][7] This behavior can be studied through analysis of a chaotic mathematical model, or through analytical techniques such as recurrence plots and Poincaré maps.

Self-Organization & Entropy - The Terrible Twins by Chris Lucas "Order is not pressure which is imposed on society from without, but an equilibrium which is set up from within."José Ortega y Gasset, Mirabeau and Politics, 1927 "Freedom and constraint are two aspects of the same necessity, which is to be what one is and no other." European Master Programme in System Dynamics - a joint European study programme Erasmus Mundus Erasmus Mundus is a comprehensive cooperative and mobility programme of the European Union. One of its goals is to establish Europe as a setting ‘par excellence’ for higher education worldwide. Read more Five Manifestos for the Creative Life by Kirstin Butler How a numbered list can start a personal revolution. Some days everyone needs a little extra encouragement. The words or lines or colors don’t want to come, or worse, we don’t even want to sit down to create. That’s when we turn to these inspiring manifestos, any one of which is guaranteed to give our uncooperative creativity a sharp kick in the pants. Here are five of our favorite contemporary manifestos that nudge ideas out of your head and into the hands of the world.

Autopoiesis 3D representation of a living cell during the process of mitosis, example of an autopoietic system. The original definition can be found in Autopoiesis and Cognition: the Realization of the Living (1st edition 1973, 2nd 1980): Page 78: - An autopoietic machine is a machine organized (defined as a unity) as a network of processes of production (transformation and destruction) of components which: (i) through their interactions and transformations continuously regenerate and realize the network of processes (relations) that produced them; and (ii) constitute it (the machine) as a concrete unity in space in which they (the components) exist by specifying the topological domain of its realization as such a network. [1] Page 89:- [...] the space defined by an autopoietic system is self-contained and cannot be described by using dimensions that define another space. Meaning[edit]

Self-Organization Definitions aka Order, Autopoesis, Negentropy, ExtropyLovelock on Negentropy (Inverse Entropy, Negative Entropy) "The great physicist Ludwig Boltzmann expressed the meaning of the second law in an equation of great seemliness and simplicity: S=k(lnP), where S is that strange quantity entropy; k is a constant rightly called the Boltzmann constant; and lnP is the natural logarithm of the probability. It means what it says--the less probable something is, the lower its entropy. The most improbable thing of all, life, is therefore to be associated with the lowest entropy. Schrödinger was not happy to associate something as significant as life with a diminished quantity, entropy. He proposed, instead, the term 'negentropy,' the reciprocal of entropy--that is, 1 divided by entropy or 1/S.

101 Timeless Lessons Life Teaches post written by: Angel Chernoff Email Take everything you’ve ever learned – all the crazy experiences and lessons – and place it all in a box labeled “Thank you.” What has life taught you? Think about all the things you would love to tell yourself if you could travel back in time to give your younger self some advice about life. This is what our sister site, Everyday Life Lessons, is all about. Butterfly effect In chaos theory, the butterfly effect is the sensitive dependency on initial conditions in which a small change at one place in a deterministic nonlinear system can result in large differences in a later state. The name of the effect, coined by Edward Lorenz, is derived from the theoretical example of a hurricane's formation being contingent on whether or not a distant butterfly had flapped its wings several weeks earlier. Although the butterfly effect may appear to be an unlikely behavior, it is exhibited by very simple systems. For example, a ball placed at the crest of a hill may roll into any surrounding valley depending on, among other things, slight differences in its initial position. History[edit]

Origin of Life - God's Utility Function God's Utility Function Transcript Hi. Critical Thinking Worksite: Introduction I. Just What is Critical Thinking? When you hear "critical thinking", it is natural to think of criticism---that is, of unpleasant episodes involving your parents or your boss. One can think critically in episodes like these, but the term applies to many others as well.

Technological Singularity The technological singularity is the hypothesis that accelerating progress in technologies will cause a runaway effect wherein artificial intelligence will exceed human intellectual capacity and control, thus radically changing civilization in an event called the singularity.[1] Because the capabilities of such an intelligence may be impossible for a human to comprehend, the technological singularity is an occurrence beyond which events may become unpredictable, unfavorable, or even unfathomable.[2] The first use of the term "singularity" in this context was by mathematician John von Neumann. Proponents of the singularity typically postulate an "intelligence explosion",[5][6] where superintelligences design successive generations of increasingly powerful minds, that might occur very quickly and might not stop until the agent's cognitive abilities greatly surpass that of any human. Basic concepts Superintelligence

Dielectric A polarized dielectric material The study of dielectric properties concerns storage and dissipation of electric and magnetic energy in materials.[2] Dielectrics are important for explaining various phenomena in electronics, optics, and solid-state physics. Terminology[edit] While the term insulator implies low electrical conduction, dielectric typically means materials with a high polarizability. The latter is expressed by a number called the relative permittivity (also known in older texts as dielectric constant). The term insulator is generally used to indicate electrical obstruction while the term dielectric is used to indicate the energy storing capacity of the material (by means of polarization).