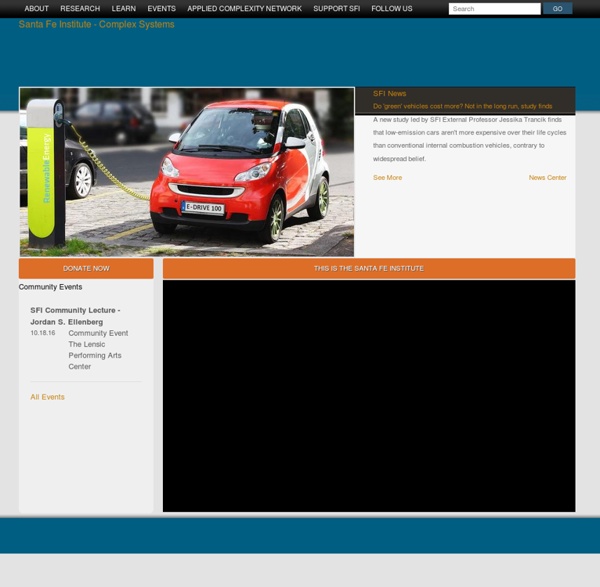 Chaos Theory and Complexity Theory A double rod pendulum animation showing chaotic behavior. Starting the pendulum from a slightly different initial condition would result in a completely different trajectory. The double rod pendulum is one of the simplest dynamical systems that has chaotic solutions. BRIDGE - Global Resources Global Resources Welcome to the Global Resources Database. This library contains over 3,000 specially selected gender documents picked from over 1,500 sources. It covers longstanding concerns and debates as well as emerging issues. It provides access to research, reports and policy documents, as well as records of good practice, lessons learnt and case studies, amongst other things.

Complex systems tutorial Jan Burian burianj (at) vse.cz You can find here: Basic introduction to Complex Systems Science and relevant modeling tools Many links to web resources and a list of relevant literature "Complex systems" (4IZ636), lecture on University of Economics, Prague Content Intuitive definitions of complexity International futures programme In 2006, the OECD launched the OECD Space Forum in co-operation with the space community. The Forum aims to assist governments, space-related agencies and the private sector to better identify the statistical contours of the growing space sector worldwide, while investigating the space infrastructure’s economic significance and potential impacts for the larger economy. Read more This project – involving telecoms, land transport, water and electricity – explores the many factors shaping demand for infrastructures worldwide over the coming decades, and points to the mounting difficulties, particularly in OECD countries, of financing growing infrastructure needs from public sector sources. Read more

Print and Broadcast Media From Wikipedia, the free encyclopedia Media may refer to: Communications[edit] Computing[edit] Fine art[edit] About Us Monitor helps organizations grow. We work with leading corporations, governments and social sector organizations around the world on the growth issues that are most important to them. Growth is a complicated problem. It involves identifying new opportunities through creativity and insight; it also involves the hard work of removing the barriers to growth that build up over time in any organization. Quantifying Complexity Theory by Chris Lucas "All the mathematical sciences are founded on relations between physical laws and laws of numbers, so that the aim of exact science is to reduce the problems of nature to the determination of quantities by operations with numbers."James Clerk Maxwell, On Faraday's Lines of Force, 1856 "If we define a religion to be a system of thought that contains unprovable statements, so it contains an element of faith, then Gödel has taught us that not only is mathematics a religion but it is the only religion able to prove itself to be one."

Global Governance Global governance or world governance is a social movement toward political integration of transnational actors aimed at solving problems that affect more than one state or region when there is no power of enforcing compliance. The modern question of world governance exists in the context of globalization. In response to the acceleration of interdependence on a worldwide scale, both between human societies and between humankind and the biosphere, the term "world governance" may also be used to designate laws, rules, or regulations intended for a global scale. Definition[edit] In a simple and broad-based definition of world governance, the term is used to designate all regulations intended for organization and centralization of human societies on a global scale.[1] Traditionally, government has been associated with "governing," or with political authority, institutions, and, ultimately, control.

Give a man a fish and feed him for life? Experimental evidence on the long-term effects of grants on Sri Lankan Microenterprises Typical policies to improve the incomes of poor households and their businesses are based on the sustained provision of services – be it microfinance with multiple loan cycles and regular meetings; conditional cash transfers with regular transfers over a period of years; or business training programs which are based on the idea that capital along is not enough – as in the proverb “give a man a fish and he eats for a day, teach a man to fish and he can feed himself for life”. In a new paper with Suresh de Mel and Chris Woodruff, published online today in Science, we ask whether the much simpler policy of giving a one-time grant to small business owners has any long-term effect. [An aside to World Bank/IFC readers, I am delighted that our library now finally has arranged full-text online access to Science – and the paper is short, so click through!]. Key long-term impacts · The grants continue not to have any impacts on female-owned microenterprises in the long-run.

Project Complexity and Risk Assessment Tool Version 1.4 Table of Contents 1. Introduction Technology By the mid 20th century, humans had achieved a mastery of technology sufficient to leave the atmosphere of the Earth for the first time and explore space. Technology (from Greek τέχνη, techne, "art, skill, cunning of hand"; and -λογία, -logia[1]) is the making, modification, usage, and knowledge of tools, machines, techniques, crafts, systems, and methods of organization, in order to solve a problem, improve a pre-existing solution to a problem, achieve a goal, handle an applied input/output relation or perform a specific function. It can also refer to the collection of such tools, including machinery, modifications, arrangements and procedures. Technologies significantly affect human as well as other animal species' ability to control and adapt to their natural environments. The term can either be applied generally or to specific areas: examples include construction technology, medical technology, and information technology.

An Agricultural Peace Dividend In northern Uganda, home to one of Africa’s longest and most brutal civil conflicts, organic farming is producing economic growth and stability. (Illustration by Justin Gabbard) “ The hardest part is reopening the land,” says Stella Atimango, an agricultural extension worker standing in a former battle zone beside neat rows of recently planted cotton on a one-acre farm in northern Uganda. Beyond Atimango, the tiny cotton field was surrounded by an abandoned countryside, the result of two decades of fighting between the Ugandan military and the Lord’s Resistance Army. Today, smallholder farmers use hand hoes and oxen to reclaim their land.