Free buddhist audio : free mp3s and texts on buddhism, meditation and the arts 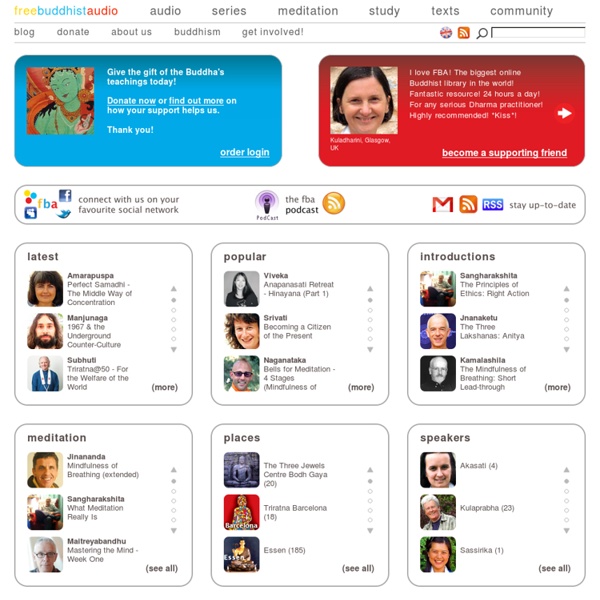 Buddhist meditation Buddhist meditation refers to the meditative practices associated with the religion and philosophy of Buddhism. Core meditation techniques have been preserved in ancient Buddhist texts and have proliferated and diversified through teacher-student transmissions. Buddhists pursue meditation as part of the path toward Enlightenment and Nirvana.

Do I believe in God? | Well Happy Peaceful I was asked this question recently by a dear friend, and I quickly responded “No!”. I have since greatly regretted my lack of mindfulness in responding this way. I know this is a huge question to many people, and I think I was unskillful and ignorant to answer in this way. So I am taking this opportunity to have a “do-over”. And I present the question to myself here publicly for all to read. Do I believe in God? 166 Documentaries To Expand Your Consciousness - truthseekerdaily.com (TruthSeekerDaily) Here is a list of over 100 documentaries you can watch for free online. They are about Science, Consciousness, ETs, you name it. It’s a smorgasbord of fascinating subjects to learn about.

Buddha Quotes, Sayings and Words of Wisdom Quotes Directory >> Buddha Quotes Buddha, was born as prince Siddhartha Gautama, in northern India, in a place, which now is part of Nepal. His exact lifetime is uncertain, but most historians date his lifetime from 563 BC to 483 BC. The meaning of the word Buddha is "The Enlightened One", or "The Awakened One", and refers to one who has become enlightened. This page, brings you a few of Buddha's quotes. "If a man who enjoys a lesser happiness beholds a greater one, let him leave aside the lesser to gain the greater." Buddhism Buddhism (pronunciation: /ˈbʊdɪzəm/ or /ˈbuːdɪzəm/) is a religion[3] and dharma that encompasses a variety of traditions, beliefs and spiritual practices largely based on teachings attributed to the Buddha. Buddhism originated in India sometime between the 6th and 4th centuries BCE, from where it spread through much of Asia, whereafter it declined in India during the middle ages. Two major extant branches of Buddhism are generally recognized by scholars: Theravada (Pali: "The School of the Elders") and Mahayana (Sanskrit: "The Great Vehicle").

Bodhisattva Quotes | We live in a world where we have to hide to make... Bodhisattva Quotes "At night I dream that you and I are two plants that grew together, roots entwined and that you know..." follow me → Newer Older <div id="about_container" style="display:block;border-top: 1px #000000 dashed;"><a name="me"></a><p class="avatar"><img alt="Bodhisattva Quotes"src=" /></p><p><script type="text/javascript"> var gaJsHost = (("https:" == document.location.protocol) ?

Buddhism and the Brain Credit: Flickr user eschipul Over the last few decades many Buddhists and quite a few neuroscientists have examined Buddhism and neuroscience, with both groups reporting overlap. I’m sorry to say I have been privately dismissive. One hears this sort of thing all the time, from any religion, and I was sure in this case it would break down upon closer scrutiny. When a scientific discovery seems to support any religious teaching, you can expect members of that religion to become strict empiricists, telling themselves and the world that their belief is grounded in reality. Thousands of NAMES OF GODS, GODDESSES, DEMIGODS, MONSTERS, SPIRITS, DEMONS   & DEITIES for your dog, horse, cat, pet or child - from Chinaroad Lowchens of Australia THE GODS OF AUSTRALIA This is an extensive list of wonderful names. Some Gods have several names. This page lists 94 names in total

Meditation For bodily positions applied during yoga, see Asana. Meditation is a practice where an individual trains the mind or induces a mode of consciousness, either to realize some benefit or for the mind to simply acknowledge its content without becoming identified with that content,[1] or as an end in itself.[2] The term meditation refers to a broad variety of practices that includes techniques designed to promote relaxation, build internal energy or life force (qi, ki, prana, etc.) and develop compassion,[3] love, patience, generosity, and forgiveness.

Japanese Zen Buddhist Philosophy 1. The Meaning of the Term Zen The designation of this school of the Buddha-Way as Zen, which means sitting meditation, is derived from a transliteration of the Chinese word Chán. Because the Chinese term is in turn a transliteration of the Sanskrit term dhyāna, however, Zen owes its historical origin to early Indian Buddhism, where a deepened state of meditation, called samādhi, was singled out as one of the three components of study a Buddhist was required to master, the other two being an observation of ethical precepts (sīla) and an embodiment of nondiscriminatory wisdom (prajñā). The reason that meditation was singled out for the designation of this school is based on the fact that the historical Buddha achieved enlightenment (nirvāna) through the practice of meditation.

The Thirteen Mindfulness Trainings The Thirteen Mindfulness Trainings form the moral guidelines to develop harmony in any simple community. One of the essential elements of the Mindfulness Trainings is that they are directly applied in our daily lives. Every moment of our lives gives us the chance to put them into practice. The idea is to recite the Mindfulness Trainings regularly so that we can review our behaviour and observe where we have not lived up to our aspirations. It is important that we observe rather than judge ourselves, so that gradually, without resistance, our lives become imbued with the qualities they represent. Irish Druids and Old Irish Religions index Sacred Texts Wicca & Neo-Paganism Irish Druids And Old Irish Religions by James Bonwick This scholarly, but very readable, book covers what was known about Druids and Irish Paganism at the end of the nineteenth century. It discusses many of the concepts which later would be utilized by the Wiccan movement to construct Celtic Neo-Paganism.