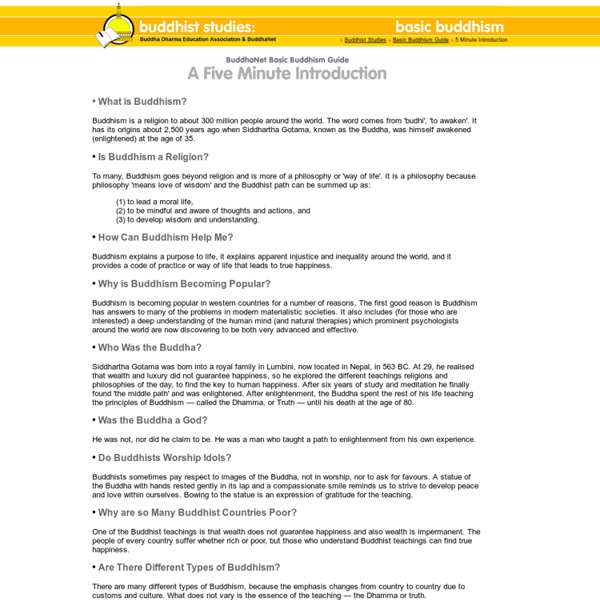 • What is Buddhism? Buddhism is a religion to about 300 million people around the world. The word comes from 'budhi', 'to awaken'. It has its origins about 2,500 years ago when Siddhartha Gotama, known as the Buddha, was himself awakened (enlightened) at the age of 35. • Is Buddhism a Religion? To many, Buddhism goes beyond religion and is more of a philosophy or 'way of life'. (1) to lead a moral life, (2) to be mindful and aware of thoughts and actions, and (3) to develop wisdom and understanding. • How Can Buddhism Help Me? Buddhism explains a purpose to life, it explains apparent injustice and inequality around the world, and it provides a code of practice or way of life that leads to true happiness. • Why is Buddhism Becoming Popular? Buddhism is becoming popular in western countries for a number of reasons, The first good reason is Buddhism has answers to many of the problems in modern materialistic societies. • Who Was the Buddha? • Was the Buddha a God? • Do Buddhists Worship Idols? Related:  World

Welcome to the Church of Satan Film protests: US orders Tunisia and Sudan withdrawal 16 September 2012Last updated at 03:29 ET The US State Department has now advised US citizens against all travel to Tunisia The United States has ordered non-essential diplomatic staff and their families to leave Sudan and Tunisia. In a statement, the state department also urged US citizens in Tunisia to make their way out of the country. The US embassies in the Tunisian and Sudanese capitals have both been attacked in the wave of anti-US protests in the Muslim world over an anti-Islam film made in the US. Earlier, Sudan refused to allow the US to send Marines to protect its embassy. Sudanese officials said the country's security forces were capable of providing protection to the embassy. Three people were killed when the US embassy was attacked in Khartoum on Friday. Americans were also warned against all travel to Tunisia, after two people lost their lives during attacks on the embassy in Tunis and a neighbouring American school. 'Unacceptable' insult Low-budget production Calls for calm

Buddhism Religion founded by the Buddha Buddhism (, ) is an Indian religion based on a series of original teachings attributed to Gautama Buddha. It originated in ancient India as a Sramana tradition sometime between the 6th and 4th centuries BCE, spreading through much of Asia. It is the world's fourth-largest religion[3] with over 520 million followers, or over 7% of the global population, known as Buddhists.[6] Buddhism encompasses a variety of traditions, beliefs and spiritual practices largely based on the Buddha's teachings (born Siddhārtha Gautama in the 5th or 4th century BCE) and resulting interpreted philosophies. Two major extant branches of Buddhism are generally recognized by scholars: Theravāda (Pali: "The School of the Elders") and Mahāyāna (Sanskrit: "The Great Vehicle"). Life of the Buddha Ancient kingdoms and cities of India during the time of the Buddha (circa 500 BCE) – modern-day India, Pakistan, Bangladesh and Afghanistan Worldview Four Noble Truths – dukkha and its ending Karma

The religion of Buddhism Religions of the world Menu Quotation by Siddhãrtha Gautama (Buddha): "Do not believe in anything simply because you have heard it. Do not believe in anything simply because it is spoken and rumored by many. Sponsored link Background: Buddhism currently has about 376 million followers and is generally listed as the world's fourth largest religion after Christianity, Islam and Hinduism. Topics covered in this section: Sponsored link: Amazon.com's online store lists the following books on Buddhism: If you see a generic Amazon.com ad here, please click on your browser's refresh key. For an introduction to Buddhism, we recommend the following books. Thubten Chodron, "Buddhism for Beginners." Not a sponsored link Site navigation: Copyright © 1996 to 2011 by Ontario Consultants on Religious Tolerance Latest update: 2013-JUL-08 Author: B.A. Sponsored link

The Middle Ages | Feudalism Characteristics of the Feudal World Timeline The Middle Ages or medieval time is believed to have started with the fall of the Roman Empire in 476 and to have lasted about 1,000 years until about 1450. The beginning of the Middle Ages is called the Dark Ages because the great civilizations of Rome and Greece had been conquered. The end of the Middle Ages in about 1450 led to the beginning of the Renaissance. The principal features of the Renaissance were that learning became important, the lords and the church were both becoming powerful forces for change, the art world was flourishing with innovations like the development of perspective in painting and there was great advancement in science. The barbarians were prevalent in most of the European nations of the Middle Ages. It should be noted that other parts of the world were thriving in this era. The People Life was very hard in the Middle Ages. The Family Family life was governed by the place one held in society.

Judaism Judaism (from the Latin Iudaismus, derived from the Greek Ἰουδαϊσμός, and ultimately from the Hebrew יהודה, Yehudah, "Judah";[1][2] in Hebrew: יהדות, Yahadut, the distinctive characteristics of the Judean ethnos)[3] is the religion, philosophy and way of life of the Jewish people.[4] Judaism is a monotheistic religion, with the Torah as its foundational text (part of the larger text known as the Tanakh or Hebrew Bible), and supplemental oral tradition represented by later texts such as the Mishnah and the Talmud. Judaism is considered by religious Jews to be the expression of the covenantal relationship God established with the Children of Israel.[5] Judaism includes a wide corpus of texts, practices, theological positions, and forms of organization. Judaism claims a historical continuity spanning more than 3,000 years. Defining character and principles of faith Defining character Glass platter inscribed with the Hebrew word zokhreinu - remember us Core tenets 13 Principles of Faith:

Iranian commander: Nothing will remain of Israel if it attacks In unusually strongly worded, detailed statement, Revolutionary Guard Chief Mohammad Ali Jafari warns Israel against consequences of proceeding with military strike against Tehran's nuclear program The top commander in Iran's powerful Revolutionary Guard warned Sunday that "nothing will remain" of Israel if it takes military action against Tehran over its controversial nuclear program. General Mohammad Ali Jafari said Iran's response to any attack will begin near the Israeli border. The Islamic Republic has close ties with terrorists in Gaza and Lebanon, both of which border Israel. Related stories: Iran has in the past made reference to the destruction of Israel but his comments at a Tehran news conference were unusually strongly worded and detailed. He also said that Iran warned that oil shipments through the strategic Strait of Hormuz will be in jeopardy if a war breaks out between Iran and the United States. Gen. "But it does not mean that we have a military presence there," he said.