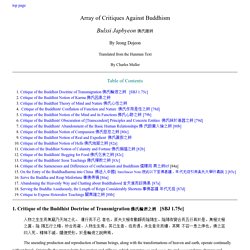 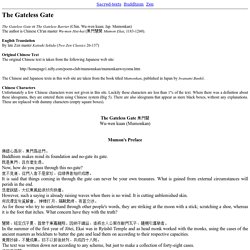 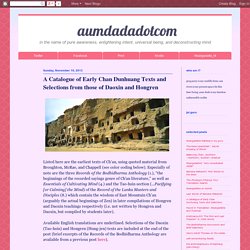 Especially of note are the three Records of the Bodhidharma Anthology (1.), “the beginnings of the recorded­ sayings genre of Ch'an literature,” as well as Essentials of Cultivating Mind (4.) and the Tao-hsin section (...Pacifying [or Calming] the Mind) of the Record of the Lanka Masters and Disciples (8.) which contain the wisdom of East Mountain Ch’an (arguably the actual beginnings of Zen) in later compilations of Hongren and Daoxin teachings respectively (i.e. not written by Hongren and Daoxin, but compiled by students later).

Available English translations are underlined. Early Tibet. Why does history get written? 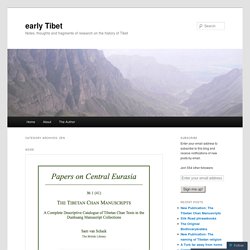 I think we’d all agree that the motives for creating history are mixed, and just as complex as the uses it gets put to after it’s written. Page 965 Encyclopedia of Buddhism Librarum.org. A Fistful of Sand. Chinese Fa-hsiang School Teaching. The Chinese Yogachara school was founded by Hsuan-tsang(600-664, Fig. 2), a Chinese pilgrim-translator, and his student Kwei-Ji(638-682), who systematized the teaching. 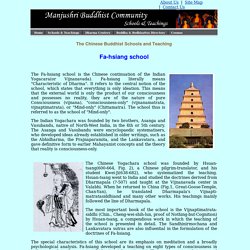 Hsuan-tsang went to India and studied the doctrines derived from Dharmapala (? -507) and taught at the Vijnanavada center in Valabhi. When he returned to China (Fig.1, Great-Goose-Temple, Chan-Yan), he translated Dharmapala's Vijnapti-matratasiddhiand and many other works. His teachings mainly followed the line of Dharmapala. Index-eng8-Buddhist philosophy.

Bies25.pdf. Buddhism Across Boundaries: The Interplay of Indian, Chinese, and Central Asian Source Materials - spp222_indian_chinese_buddhism.pdf. Akb-ch-9-web.pdf. 姊垫枃璐濆彾缁忎笌浣涙暀鏂囩尞鐮旂┒鎵€ The Dhammapada: Verses and Stories. Zen masters say "Don't seek the truth - just drop your opinions. Zen Poems Sharing a Mountain Hut with a Cloud A lonely hut on the mountain-peak towering above a thousand others; One half is occupied by an old monk and the other by a cloud: Last night it was stormy and the cloud was blown away; After all a cloud could not equal the old man's quiet way. 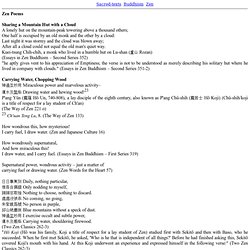 Kuei-tsung Chih-chih, a monk who lived in a humble hut on Lu-shan (盧山 Rozan) (Essays in Zen Buddhism – Second Series 352) "he aptly gives vent to his appreciation of Emptiness; the verse is not to be understood as merely describing his solitary hut where he lived in company with clouds. " Carrying Water, Chopping Wood 神通並妙用 Miraculous power and marvelous activity– 運水及槃柴 Drawing water and hewing wood! Sutta & Sutra - Urban Dharma. The Visuddhimagga / The Path of Purification Buddhaghosa - Translated by Bhikkhu Ñanamoli The Visuddhimagga or The Path of Purification, is a Theravada Buddhist commentary written by Buddhaghosa approximately in 430 CE in Sri Lanka. 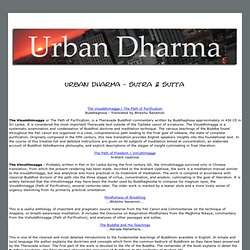 It is considered the most important Theravada text outside of the Tipitaka canon of scriptures. The Visuddhimagga is a systematic examination and condensation of Buddhist doctrine and meditation technique. The various teachings of the Buddha found throughout the Pali canon are organized in a clear, comprehensive path leading to the final goal of nibbana, the state of complete purification. Originally composed in the fifth century, this new translation provides English speakers insights into this foundational text. Sanskrit Texts - Tsadra Foundation Blog. Amitabha A Story Of Buddhist Theology. II. 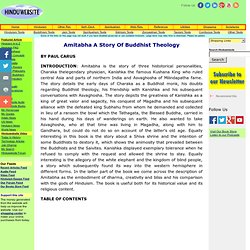 THE NOVICE go To Contents Charaka the novice lived with his brethren in peace, and his senior, the venerable Subhuti, was proud of his learned disciple, for he was patient, docile, modest, earnest, and intelligent, and proved all these good qualities by an abnormally rapid progress. He learned the Sutras perfectly and soon knew them better than his teacher. Материалы для изучающих Ланкаватара-сутру : Lankavatara Sutra study. The Lankavatara Sutra. A Mahayana Text. Translated for the first time from the original Sanskrit byDaisetz Teitaro Suzuki Original Edition Published in London in 1932. 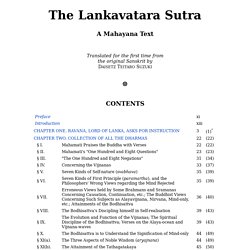 Based upon the Sanskrit edition of Bunyu Nanjo (1923). Buddhist Sutras. Classical Languages The Theravada branch of Buddhism uses Pali as its sacred tongue. 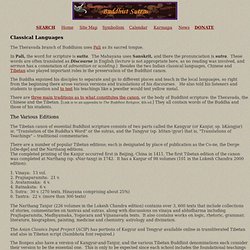 In Pali, the word for scripture is sutta. The Mahayana uses Sanskrit, and there the pronunciation is sutra. Dharma Fellowship: Library - Deepening Calm-Abiding - The Nine Stages of Abiding. Introduction 1. Those who wish to keep a rule of life Must guard their minds in perfect self-possession. 9 Jhanas - The Dhamma Encyclopedia. From The Dhamma Encyclopedia (Adapted from a chapter from Buddha's Lists book by David N. Snyder, Ph.D.) The jhanas are altered states of consciousness which are produced from periods of strong concentration. Although not enlightenment experiences, they do provide much needed experience into the Path and explain much of the cosmology in an experiential way. For example, each jhana tends to correspond to one or more heavenly realms in the cosmology. A Dictionary of Chinese Buddhist Terms. 佛學規範資料庫 / Buddhist Authority Database Project. Buddhism Teacher.

Sunyata (Sanskrit) and Sunnata (Pali) translates as “emptiness” in English. It is a basic concept in Buddhism and is stressed especially in some schools of Mahayana Buddhism, including Zen. Emptiness teaches the lack of substantiality or independence of things, and stresses the idea of no independent origination, that the present state of all things is the result of a previous state. Emptiness includes the teaching of impermanence; everything is always in a state of change. In other words, everything, including every sentient being, is an ever-changing process. The dharma of non-attachment relates to the concept of emptiness and impermanence, since if all things are impermanent and are always changing, what is there to be attached to? The Buddha taught that this is like this, because that is like that . . . and that is like that, because this is like this; this is called dependent co-arising.”

“You can’t step into the same river twice. Zen in Daily life / Bendowa. Skip to navigation Written by zen master Dogen Zenji translated by Prof. Masunaga Reiho Translated in Soto Approach to Zen by Prof. Masunaga Reiho, Chapter 10, Layman Buddhist Society Press, 1958. Introduction Dogen wrote Bendowa shortly after his return from China. Basically Bendowa discusses zazen; more specifically it tells how to perfect the Buddhist way through zazen. Fascicles. A Translation of Dogen's Uji. Some MomentsA Translation of Dōgen Zenji’s Uji The old Buddha said: Some moments--standing at the heights of the highest mountain peak; Some moments--moving through the depths of the deepest ocean trench. Some moments--the bad angel; Some moments--the good angel. The Awakening of Faith Index. Nagarjuna: Verzen van het Midden. Thinking in Buddhism. Tipitaka: The Pali Canon. Of Mindsets and Monkeypots. Rahogata Sutta: Alone. Then a certain monk went to the Blessed One and, on arrival, having bowed down to him, sat to one side.

As he was sitting there he said to the Blessed One: "Just now, lord, while I was alone in seclusion, this train of thought arose in my awareness: 'Three feelings have been spoken of by the Blessed One: a feeling of pleasure, a feeling of pain,[1] & a feeling of neither pleasure nor pain. The Discourse on Right View: The Sammaditthi Sutta and its Commentary. 1. Thus have I heard. On one occasion the Blessed One was living at Savatthi in Jeta's Grove, Anathapindika's Park. There the Venerable Sariputta addressed the bhikkhus thus: "Friends, bhikkhus.

JOURNAL OF INDIAN AND BUDDHIST STUDIES (INDOGAKU BUKKYOGAKU KENKYU) Visuddhi-magga. The Heart Sutra. Aśvaghoṣa. The Buddha-carita Book I The Birth of the Holy One.