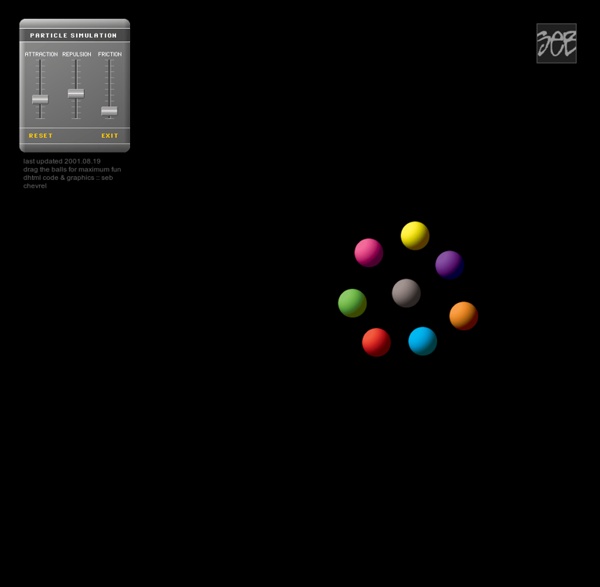 why americans should never be allowed to travel I had someone ask for an aisle seats so that his or her hair wouldn't get messed up by being near the window. A client called in inquiring about a package to Hawaii. After going over all the cost info, she asked, "Would it be cheaper to fly to California and then take the train to Hawaii?" Marijuana Cooking, Recipes, Tutorials, Cannabutter, more The Cannabis Chef Search Weed Recipes Marijuana (Cannabis) Cookies by The Cannabis Chef February 5, 2013 in Sweet Recipes, Weed Recipes

The Cloth Simulation - StumbleUpon A little more detail: What makes this simulation special is the speed at which everything is computed. Javascript (the language this is written in) is not exactly the most efficient language for this type of computation. This being said, much time was spent squeezing out every little detail that slows things down. Einstein for Everyone Einstein for Everyone Nullarbor Press 2007revisions 2008, 2010, 2011, 2012, 2013 Copyright 2007, 2008, 2010, 2011, 2012, 2013 John D. best of craigslist: Why Geeks and Nerds Are Worth It... In the wide world of dating, there are many options. Do you go for the flashy guy with the smooth smile, or the dude in the corner typing away on his laptop? The following are reasons why I think my fellow females should pay more attention to the quiet geeks and nerds, and less attention to the flashy boys. 1.) While geeks and nerds may be awkward, they’re well-meaning 9 out of 10 times. That smooth dude with the sly grin and the spider hands?

mental_floss Blog & The Quick 10: 10 Famous People and Their Drug Habits New book recommendation! Assuming you've already pre-ordered the mental_floss History of the World, that is. It's called Genius and Heroin, by Michael Largo, who is the same guy that wrote Final Exits. It's also a super-interesting read, if you haven't heard of it. Genius is full of stories about famous people and what they were addicted to "“ drugs, sex, work, food. It's really fascinating, and it's perfect Quick 10 Material. Boston chemist wins Houston-based Welch Award A Boston scientist who harnessed the power of nuclear magnetic resonance to elucidate the structure of molecules has won the 2011 Welch Award in Chemistry, a prestigious prize given by the Houston-based Welch Foundation. The tools devised more than four decades ago by Massachusetts Institute of Technology chemist John Waugh, 82, are still used in labs today. "Dr. Waugh discovered how to use NMR to study solids, creating a collection of tools that allows researchers to view the structures and properties of proteins, membranes, viruses and many other critical components of life," said Ernest Cockrell, chair of The Welch Foundation. "Ultimately, new applications in fields as diverse as medicine and batteries can trace their way back to the research techniques he initiated."

The Meaning of Life by Cliff Pickover The differences between men and women. This is my lastest book: The Book of Black: Black Holes, Black Death, Black Forest Cake, and Other Dark Sides of Life Easily read my latest tweets, for free, here.