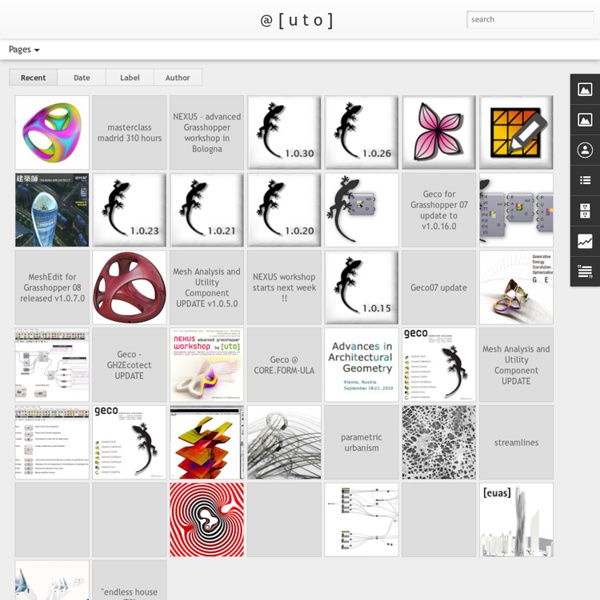 Geometry, Surfaces, Curves, Polyhedra The following is a random collection of various topics in geometry the author has explored or simply documented over the years. Many of the topics include source code illustrating how to solve various geometric problems, or to assist others recreating the geometric forms presented. Notes on polygons and meshes Includes Surface (polygon) simplification, Clipping a polygonal facet with an arbitrary plane, Surface Relaxation and Smoothing of polygonal data, Mesh crumpling, splitting polygons, two sided facets, polygon types, tests for clockwise and concavity, clipping line to polygons, area of a 3D polygon, area of general polygons, determining inside/outside test, intersection of a line and a facet, Eulers numbers. Notes on points, lines and planes Includes calculations for the distance between points, lines and planes. The intersection between 2 lines in 2D and 3D, the intersection of a line with a plane. The intersection of two and three planes. Texture library There are holes in the sky.

Grasshopper Modules - Proxy Wiki From Phylogenesis, FOA 2003 The following Grasshopper modules were created in consultation with FOA's Phylogenesis, in particular the taxonomy of forms found at the conclusion of the book. Grasshopper is an exciting and evolving modeling platform - the following examples attempt to develop a range of geometric examples to explore its form-making potentials. Andrew Payne, a GSAPP alum, has created a comprehensive primer on Grasshopper that can be found here. You should have this handy for reference. Helpful Modules These modules are provided to supplement Grasshopper with a few simple features. Truss Module Grasshopper 3D Truss This module creates an offset truss from a given surface. Point Topology The simplest form of data to work with, points can be propagated into 3D space and can have geometry mapped to them. A Matrix is a 3-Dimensional point set, interpreted as a field of voxels. Download Rhino File Matrix.3dmDownload Grasshopper definition Example-Matrix.ghx Line Topology

alexhogrefe.com/rhinogh This definition was developed for my final thesis project to generate a louver system based on functional requirements within the building. The performance was then tested in Ecotect. A large part of my thesis design involved invertible arena seating with many moving parts. This definition looks at taking any curved surface, and generating weaving geometry across it. The parametric skyscraper uses Grasshopper to generate the entire structure. My favorite definition to date, this definition generates box designs based on real boxes I crafted in the wood shop while in Grad school This definition extrudes geometry based on their proximity to a polyline attractor. Using a definition created by paramod, I wanted to see if I could edit the definition so that different panels could be combined to create a seamless surface This definition takes a cylinder and transforms it based on the location of objects moving around it. Louvers orient themselves towards multiple objects based on proximity.

Oasys GSA GSA will analyse exactly what you tell it to, nothing more, nothing less. So if you input working loads (or SLS) then that is what will be processed. Assuming that you ran a linear analysis, you can then use the Combinations section to multiple the analysis results by the appropriate factor and add them to other analysis results. If your analyses are non-linear then you must not do this and you should instead include the multiplications and combinations within the analysis itself. The bridge load optimization analysis is slightly different in that it will work out the appropriate factors to apply at any location, and give you the characteristic, combination and frequent load values in accordance with EC1. For more information see the help file (Program data > Cases and Tasks > Bridge Loading > Standard bridge Loading > Eurocode loading) and the Eurocode itself.

2011-06-26 We looked at the paper entitled 'Linking Hanging Chain Models to Fabrication' by Axel Kilian as a source of information and inspiration to carry out our next experiment. The next experiment mainly had to focus on utilizing digital form finding methods to add to our methods for producing the next prototype. Axel Kilian, Ph.D. Candidate in Computation, Department of Architecture, School of Architecture and Planning, Massachusetts Institute of Technology, Cambridge, MA. Fabrication output is an integral part of the iterative process and not a post design process. The relationship between form finding model and the translation into volumetric form was explored in a series of small models. His Motivation : Equilibrium solutions can be scaled if the proportional distribution of mass is kept and the geometry of the lines of forces is scaled proportionally. A major disadvantage is that a physical model is hard to measure accurately and disturb the model. model in one given state geometry.

Grasshopper::Lists, Paths, and Trees G03 Due: April 24 at the start of class Spider-webs and Doilies Manipulating Grasshopper data-trees is hard, even when you understand the concept. There is no starting-point file for this -- just open a blank Rhino and Grasshoper file and start in! Fast 3d slicer Ive worked all the day in this definition and I hope you like it. With this you can: -make ribs with notches -use the sliders to specify the x and y spacing of a rectangular grid or -use a custom grid (for this you just need 2 sets of lines) -specify the thickness of the material -atomatically place and order the ribs with labels for cut -use a 3d guide for construction -Run or stop the definition It has torus example inside with the custom grid option on. For now (and its just today) all the geometry I sliced worked perfectly. Any suggestions will be very welcome!

Mosquito | Studio Nu | SOCIAL MEDIA FaceBook plugin Working again!: The plugins have been reprogrammed so to work with the new Facebook OAuth API. NEW Record Media plugin: Allows you to record social media information from the media components over time without duplicates. Might be complex for some to use at first. Twitter Working again! Ducplicates: The duplicate component has been updated so to make things easier when recordeding tweets and deleting duplicates. Flickr: Search twitter database for photos based on location and tag/title. ImageDownload: Download images from Flickr or Twitter plugins. Bug Fixes: Fixed bugs with Twitter API access and new functions in String Duplicate component. GoogleMaps : Now works for all users, if it was crashing Rhino before , this should fix it. GoogleDirection : get a route and the directions from one location to another, with distance, time, and steps. Location : Get the address of a given name of place or use a GPS point….reverse GeoCode. Flickr EndDate: The date you want to search up to.