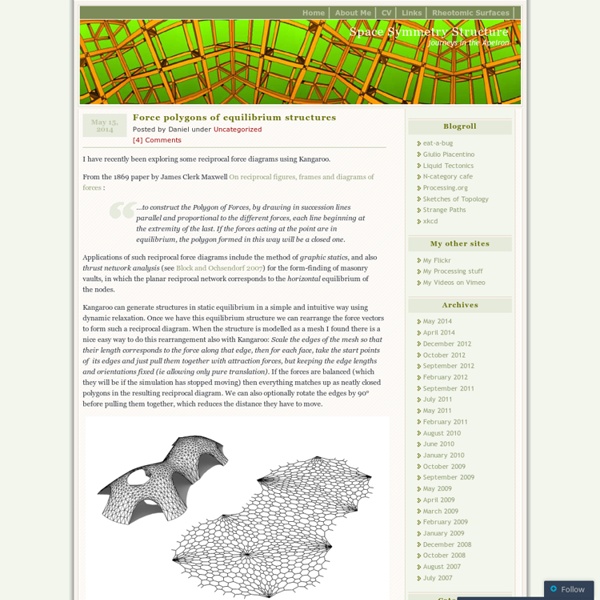 Complex Geometry Grasshopper (Explicit History) Same Area Voronoi using Galapagos I have been quite fascinated by the recent development of Galapagos for Grasshopper. This is a simple example of its application set up to solve for a 10-point voronoi division within a user-defined boundary where all the parts are divided as equally as possible in terms of their areas. Gradient Patterns Testing different patterns with grasshopper. Pagora Bench Playing with hopper and Maxwell 2 Two Surfaces Twisted Box It’s been a while I’ve played with Grasshopper. In order to use the definition, first define a box, and some geometries within the box as your base component. Two Surface Space Frame (Rhino Explicit History) Ah so, the new version of the Explicit History plug-in for Rhino is out. This is another way of creating space frames using U/V divisions from two surfaces. crtli_gh_space_frame.wrmcrtli_gh_space_frame.3dm Rhino Explicit History Surface Blend

The Geometry of Bending Relational Geometries | Each unique instance of the will be installed as an aggregation of raw, unsealed ceramic tiles. The climate, surface orientation, and potential shading by other structures will affect the ultimate growth and eventual disintegration of the wall. When installed in a shaded, colder environment, vegetation growth will spread slowly. The freeze thaw cycle of water penetrating the areas of unsealed ceramic tile will most likely cause the eventual disintegration of the wall. If installed in a warmer climate that receives optimal sunlight, the vegetation will rapidly take over the wall and cause it’s destruction. A mix of seeds and fungus spores will be encapsulated in phase change wax. The interior of each tile contains a series of reservoirs that are activated depending on the orientation in which the tile is installed. Seed and Fungus spores chosen will be native the region in which the installation is situated. Varying levels of porosity will control the introduction of the windblown agents.

LaN / LIVE ARCHITECTURE NETWORK MetaMaticZoo Waterbomb Tessellation and Beyond It all started with the platonic passion on origami tessellations, not much of the origami, but the tessellation part, as I didn’t want to fold it physically, nor model them using a physical engine such as Kangaroo. That would also be very unnecessary (and yes, very boring) to simulate a folding effort on computer unless we lose our connection with the real world. Instead, I tried to look at a much abstract, silly and basic part of it; the creasing patterns. I found below tessellation named “waterbomb” by the beautiful source of Eric Gjerde (here) to start an exploration. First, I tried to implement 3 hexagonal grids superimposed to find the locations of polygons. When I shift this pattern 7 cells to the left, It reflects one row below. This goes on like that. At this point I was just about to quit the experiment without drawing the extension lines you see at the pattern. There are also further possibilities with this definition, I’ll briefly present here.

Grasshopper Modules - Proxy Wiki From Phylogenesis, FOA 2003 The following Grasshopper modules were created in consultation with FOA's Phylogenesis, in particular the taxonomy of forms found at the conclusion of the book. Grasshopper is an exciting and evolving modeling platform - the following examples attempt to develop a range of geometric examples to explore its form-making potentials. Andrew Payne, a GSAPP alum, has created a comprehensive primer on Grasshopper that can be found here. Helpful Modules These modules are provided to supplement Grasshopper with a few simple features. Truss Module Grasshopper 3D Truss This module creates an offset truss from a given surface. Point Topology The simplest form of data to work with, points can be propagated into 3D space and can have geometry mapped to them. A Matrix is a 3-Dimensional point set, interpreted as a field of voxels. Download Rhino File Matrix.3dmDownload Grasshopper definition Example-Matrix.ghx A sparse matrix takes a matrix and set of points as inputs.

Relational Geometries 2009 | This techniques seminar introduces students to the next generation of computer aided design tools that facilitate movement between digital modeling and material prototyping. Working from the idea of parametric design, the seminar methodically moves through a project exploring NURBS modeling, parametric modeling, rapid prototyping, mold making and material prototyping. The software environments that the seminar will introduce are Rhinoceros 4.0 and Grasshopper 0.5, while the rapid prototyping tools include the Universal Laser Cutter and the Dimension 3d Printer. The seminar’s investigations are developed around the theme of response. The course’s objective is to use the next generation of digital design tools to develop productive techniques for architectural design.