Lines go all over the place. 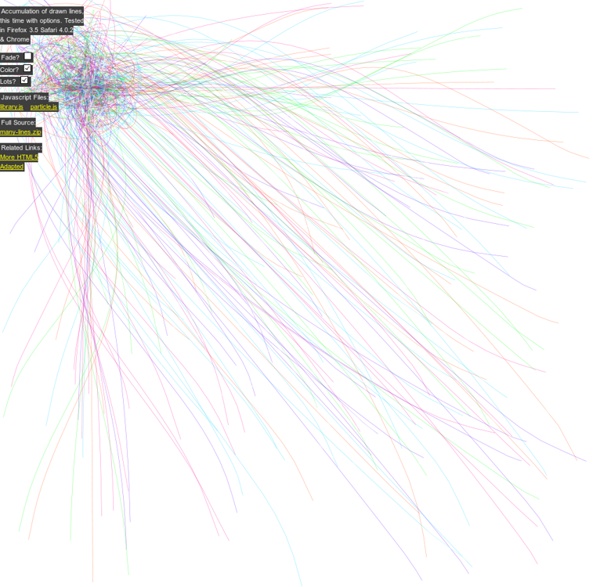 online paint program Flame Painter is a unique paint program, it belongs to my 'I am an Artist' experimental project. I think with tools which inspires you, everyone can be an artist. You can try it here, change different brush settings and paint your own flame paintings. When you change the background from black to white, the palette changes from additive to subtractive and the feeling of the painting is very different. It's not easy to explain all brush parameters, so I leave this for your experimentation. Gothic horror illustrations by Tatsuya Morino Artist Tatsuya Morino puts a unique twist on the great monsters of Gothic literature in a series of illustrations featured in the book Kaibutsu Gensō Gashū. Frankenstein - Mary Shelley, 1818 [+] The Fly - George Langelaan, 1957 Moxon's Master - Ambrose Bierce, 1919 The Hound of the Baskervilles - Sir Arthur Conan Doyle, 1901

Policy: Twenty tips for interpreting scientific claims Science and policy have collided on contentious issues such as bee declines, nuclear power and the role of badgers in bovine tuberculosis. Calls for the closer integration of science in political decision-making have been commonplace for decades. However, there are serious problems in the application of science to policy — from energy to health and environment to education. One suggestion to improve matters is to encourage more scientists to get involved in politics. Although laudable, it is unrealistic to expect substantially increased political involvement from scientists. Another proposal is to expand the role of chief scientific advisers1, increasing their number, availability and participation in political processes.

Phantom time hypothesis Basis of the hypothesis[edit] The basis of Illig's hypothesis include:[2][3] the scarcity of archaeological evidence that can be reliably dated to the period AD 614–911, on perceived inadequacies of radiometric and dendrochronological methods of dating this period, and on the over-reliance of medieval historians on written sources.the presence of Romanesque architecture in tenth-century Western Europe. This is taken as evidence that less than half a millennium could have passed since the fall of the Roman Empire, and concludes that the entire Carolingian period, including the existence of the individual known as Charlemagne, is a forgery by medieval chroniclers; or more precisely, a conspiracy instigated by Otto III and Gerbert d'Aurillac.the relation between the Julian calendar, Gregorian calendar and the underlying astronomical solar or tropical year.

DIY Wrap Bracelet You should all know by now that we are all about stacking bracelets on our wrists. The more, the better. In fact . . . the most, the best! Pop Culture Icons Impressively Carved into Crayola Crayons Crayons don’t have to be just for coloring. In the case of Hoang Tran, they are the perfect material for tiny sculptures. Using large-size Crayola crayons, the artist delicately hand-carves them into pop-culture icons. Hello Kitty, Han Solo, and the Teenage Mutant Ninja Turtles are just some of the incredibly detailed figures that he’s able to produce. As if these creations weren’t impressive enough, they are made even more so with the addition of color. Tran melts wax from other colors of crayons and applies it as an accent to the main figure.

8 Myths and Atrocities About Christopher Columbus and Columbus Day On the second Monday of October each year, Native Americans cringe at the thought of honoring a man who committed atrocities against Indigenous Peoples. Columbus Day was conceived by the Knights of Columbus, a Catholic Fraternal organization, in the 1930s because they wanted a Catholic hero. After President Franklin D. Yuki Matsueda ‘While most designers are busying adding more and more elements into their artworks, Japan-based Yuki Matsueda has, however, managed to let some elements escape from his art pieces. The result seems quite amazing… A vivid 3D image is successfully created and all the elements are believed to be more shocking than those stay still on paper.’

Ethereal Woven Metal Leaf and Seed Installations by Michelle Mckinney U.K. artist Michelle Mckinney examines the contrast of manmade materials with forms of nature in her ethereal installations of leaves, seeds, and butterflies formed from handcut woven metal. The artist cuts each shape from copper, brass, or steel mesh which is then colored and assembled into the forms seen here. You can see more of her work over on Facebook and in her portfolio. (via Colossal Submissions) Secret Trans-Pacific Partnership Agreement (TPP) WikiLeaks Release of Secret Trans-Pacific Partnership Agreement (TPP) Advanced Intellectual Property Chapter for All 12 Nations with Negotiating Positions (August 30 2013 consolidated bracketed negotiating text) Article QQ.A.1: {Definitions}

Melted Crayon Art Perhaps I should begin this post by introducing you to my mom, also known as Her Ladyship Craftiness…er, Her Royal Craftiness? I’m still working on the title. Regardless, she’s the coolest, most creative and talented woman I know. She can make pretty much anything. Minister Scullion: Central desert region artworks on display Watercolour paintings from five generations of Western Aranda artists are on display at Parliament House in Canberra from today to raise awareness of the legacy of Albert Namatjira and the importance of arts centres to remote communities. Arts and social change company Big hART has been working with Western Aranda people from Central Australia to celebrate Albert Namatjira’s life and legacy. With Ngurrutjuta Many Hands Art Centre, Big hART has been working with the youngest generation of Namatjira artists to continue the watercolour tradition, including teaching young people to create animations based on the watercolours. Minister for Indigenous Affairs, Nigel Scullion, launched the exhibition and announced preparations for a new Trust to support the financial stability of the art centre.

37 Dr. Seuss Quotes That Can Change the World Dr. Seuss is an oft-quoted author that published over 40 books, many of which have been made into films, and have even been studied in university classrooms. This is a collection Seuss quotes that have the power to change the world if their message is heeded.