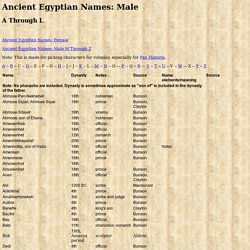 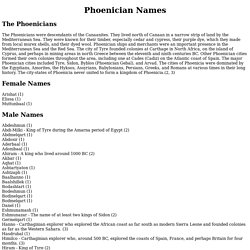 They lived north of Canaan in a narrow strip of land by the Mediterranean Sea. They were known for their timber, especially cedar and cypress, their purple dye, which they made from local murex shells, and their dyed wool. Phoenician ships and merchants were an important presence in the Mediterranean Sea and the Red Sea. The city of Tyre founded colonies at Carthage in North Africa, on the island of Cyprus, and perhaps in mining areas in north Greece between the eleventh and ninth centuries BC.

English-to-Greek Word Search Results. Etruscan Names. A bibliography of the attested references for these names is forthcoming. 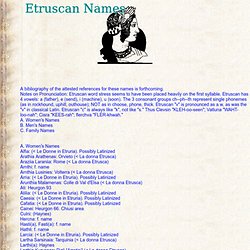 Notes on Pronunciation: Etruscan word stress seems to have been placed heavily on the first syllable. Etruscan has 4 vowels: a (father), e (send), i (machine), u (soon). The 3 consonant groups ch--ph--th represent single phonemes (as in rockhound, uphill, outhouse); NOT as in choose, phone, thick. List of Phoenician Male Names. This is part of a list of Phoenician proper names that I am working on. 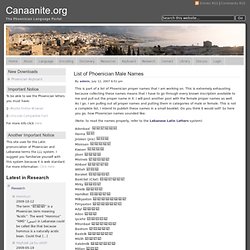 This is extremely exhausting because collecting these names means that I have to go through every known inscription available to me and pull out the proper name in it. I will post another post with the female proper names as well. As I go, I am pulling out all proper names and putting them in categories of male or female. This is not a complete list, I intend to publish these names in a small booklet. Ancient Names Galleria. "I will not let you enter through me," says the jamb of the door, "unless you tell me my name. 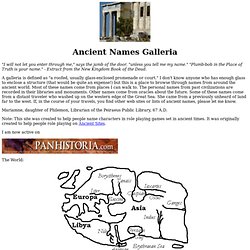 " "Plumb-bob in the Place of Truth is your name. " - Extract from the New Kingdom Book of the Dead. A galleria is defined as "a roofed, usually glass-enclosed promenade or court. " I don't know anyone who has enough glass to enclose a structure (that would be quite an expense!) But this is a place to browse through names from around the ancient world. Most of these names come from places I can walk to. Phoenician Names. Phoenician names are generally composite words with a specific meaning. 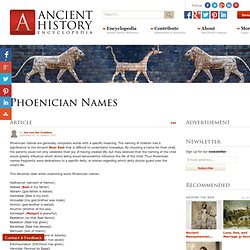 The naming of children had a significance in the Ancient Near East that is difficult to understand nowadays. By choosing a name for their child, the parents could not only celebrate their joy of having created life, but they believed that the naming of the child would greatly influence which divine being would benevolently influence the life of the child. Thus Phoenician names frequently were dedications to a specific deity, or wishes regarding which deity should guard over the child's life. This becomes clear when examining some Phoenician names: Common prefixes are "Abd-" (servant of, cf. ΛΕΞΙΚΌ - LEXICON: Greek-English-Greek dictionary. Instructions: The left-hand-side form translates words from Greek to English.

If you do not have Greek fonts you may type your query using its Roman transliteration. For example you may type in the word 'logos' instead of 'λόγος'. The right-hand-side form translates words from English to Greek. Scythian Names. Scythian Vocabulary and names. Scythian Vocabulary and Names Based on the works of Gyula Meszaros (Scyth, Hattic, Hittite, Kartvelian langs,Caucasus Lang) Additions on Uralic, Sumerian, Hurrian, Hungarian by Fred Hamori Additions on Turkic from Umit Ertim, and Marc Hubey Additions on Chuvash from Elana Romanova Language Abreviations: Kr=Krin, aba=abazak, cher=cherkes, abc=abchaz/abhaz min=mingrel, tem=temirgoi, khar=kartwel languages A short historical introduction of the Scythians select Scytha.htm Basic words and word particles a = pronoun demonstrative, pointing pronoun? 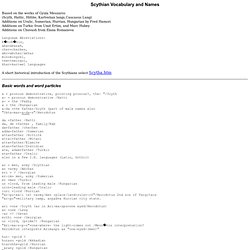 Ancient Chinese Names. China Imperial China began in 221 B.C., during the time of the Roman Republic, and lasted until the 20th century. 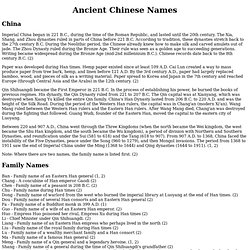 The Xia, Shang, and Zhou dynasties ruled in parts of China before 221 B.C. According to tradition, these dynasties stretch back to the 27th century B.C. During the Neolithic period, the Chinese already knew how to make silk and carved amulets out of jade. The Zhou Dynasty ruled during the Bronze Age. Paper was developed during Han times. Qin Shihuangdi became the First Emperor in 221 B.C. Ancient Greek Dictionary Online Translation LEXILOGOS. Medieval Names Archive. This collection of articles on medieval and Renaissance names is intended to help historical re-creators to choose authentic names. 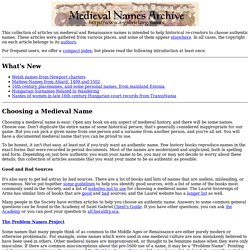 These articles were gathered from various places, and some of them appear elsewhere. In all cases, the copyright on each article belongs to its authors. For frequent users, we offer a compact index; but please read the following introduction at least once. What's New Choosing a Medieval Name. Eastern. Iberian, celtic and celtiberian names. Hittite Names. The Hittites ruled what will later be called Syria. The Assyrians knew the area as "Hatti". The Egyptians called them the "Kheta". They were a mighty power from c 1700 - 1190 BC. Ancient Greek Names. Hellenistic Names. Shqiperia / Albania Forum: Illyrian Names Males/Females.