Plus.google. Augusto: nascita di un impero - Speciale SuperQuark. ROMA IMPERIALE (Ricostruzioni virtuali 3D) Bored at work? Here’s a Google-style digital map of the Roman Empire to play with. Zac Goldsmith, the people’s dog-whistle-prone freedom fighter against the scourge of Heathrow expansion, has lost his pointless and taxpayers’-money-wasting campaign to be re-elected as an independent MP for Richmond Park & North Kingston in an unnecessary by-election that he himself forced. 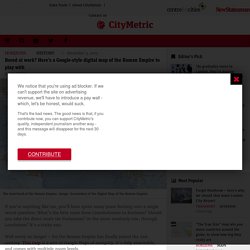 Sad! But in the midst of all this Heathrow grandstanding, preceded as it was by the advert-scattered battle between Heathrow and Gatwick, another London “hub” has been quietly expanding. In July, Philip Hammond, Chris Grayling and Sajid Javid clubbed together in their new roles as chancellor, transport secretary, and communities and local government secretary respectively, and announced a £344m expansion programme for London City Airport. The plan included an extended terminal, new taxi lanes, and more parking spaces for places. Rome Reborn. I primi insediamenti e lo sviluppo nell'antica città di Roma. Cronache dall antichità La fondazione di Roma Storia cronache 10 fondazioneroma. Teaching with ORBIS: Maps, Environments, and Interpretations in Ancient Rome - American Historical Association.

After a few minutes of tinkering with ORBIS: The Stanford Geospatial Network Model of the Roman World, one of my students exclaimed, “It’s like Google Maps, but for Rome!” 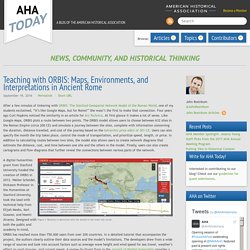 She wasn’t the first to make that connection. Four years ago Curt Hopkins noticed the similarity in an article for Ars Technica. At first glance it makes a lot of sense. Like Google Maps, ORBIS plots a route between two points. Digital Map of the Roman Empire. Ancient Rome Live. 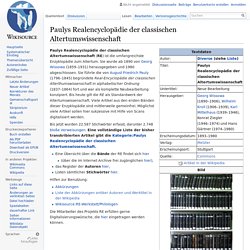 Online Coins of the Roman Empire (OCRE), a joint project of the American Numismatic Society and the Institute for the Study of the Ancient World at New York University, is a revolutionary new tool designed to help in the identification, cataloging, and research of the rich and varied coinage of the Roman Empire. 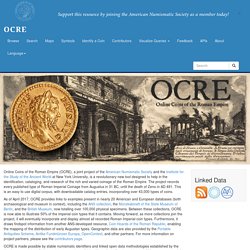 The project will ultimately record every published type of Roman Imperial Coinage from Augustus in 31 BC, until the death of Zeno in AD 491. Epigraphy Enchiridion: A List of Open Access Books for Teaching Greek and Roman Inscriptions – SARAH E. BOND. A famous funerary epigram now at the British Museum (IG XIV, 2131) and dating to the second century CE has a skeleton lying in repose. 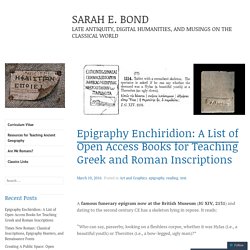 It reads: “Who can say, passerby, looking on a fleshless corpse, whether it was Hylas (i.e., a beautiful youth) or Thersites (i.e., a bow-legged, ugly man)?” I first learned about this inscription in a Greek epigraphy class at Duke University taught by Kent Rigsby. We were told to make a lemma of publications for each inscription, and I vividly remember tracking down the 1917 guide to inscriptions at the British Museum. Prof. As any English major or mixed tape wizard will tell you, anthologies are indeed an art form unto themselves. Resources for Teaching Ancient Geography – SARAH E. BOND. Making Maps Antiquity À-la-carte: “The Antiquity À-la-carte application is a web-based GIS interface and interactive digital atlas of the ancient world, featuring accurate historical, cultural, and geographical data produced by the AWMC in addition to the entire Pleiades Project feature set. 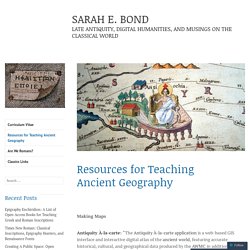 The map is completely searchable with customizable features, allowing for the creation of any map covering Archaic Greece to Late Antiquity and beyond. AWMC welcomes feedback from community members on the experience of using the application and welcomes suggestions and comments. Click here ... to launch the map application. This application works best with Firefox, Chrome, or Safari. LEGO Build with Chrome: “is a web application that allows users to explore and build a world of digital LEGO creations. 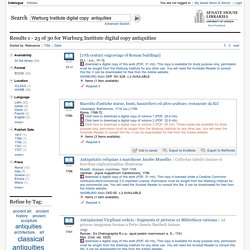 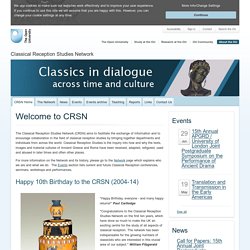 Classical Reception Studies is the inquiry into how and why the texts, images and material cultures of Ancient Greece and Rome have been received, adapted, refigured, used and abused in later times and often other places. For more information on the Network and its history, please go to the Network page which explains who we are and what we do. 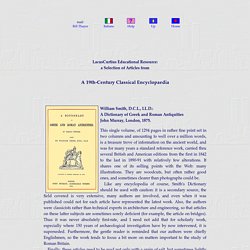 This single volume, of 1294 pages in rather fine print set in two columns and amounting to well over a million words, is a treasure trove of information on the ancient world, and was for many years a standard reference work, carried thru several British and American editions from the first in 1842 to the last in 1890‑91 with relatively few alterations. PSWPC Home. Home - Classics - LibGuides at Credo Reference. Credo LibGuides can be linked to from your institution's webpage. For LibGuides subscribers, these guides may be freely copied and modified to create or supplement your own LibGuides. Learn how to copy a LibGuide. When clicking on the links, your Credo account is accessed by IP authentication or through your institution's proxy server. For help with access issues, contact libguides@credoreference.com Our LibGuides work best for institutions with a Credo Academic Core subscription.

If you find this website useful, you can send me a picture postcard of your town or school.My mailing address is Leo C. About this site Awards received by Maecenas UB College of Arts and Sciences Some software I've written for Latin teachers. The Stoa Consortium. Gnomon Online. TOCS-IN main page. Diotima: Women & Gender in the Ancient World. Call for Collaborators to The On-line Companion to The Worlds of Roman Women The On-Line Companion to the Focus Reader, The Worlds of Roman Women, expands the book's wide representation of Latin texts by and about women dating from the earliest periods through the fourth century CE. The medium of a website, moreover, offers the opportunity to integrate visuals to texts, thus enabling users to make connections between language and material culture.

The Companion has two major parts. Herodotus Timemap. Book 1, Ch. 1 This is the display of the inquiry of Herodotus of Halicarnassus, so that things done by man not be forgotten in time, and that great and marvelous deeds, some displayed by the Hellenes, some by the barbarians, not lose their glory, including among others what was the cause of their waging war on each other.The Persian learned men say that the Phoenicians were the cause of the dispute. PELAGIOS Project Overview. DHQ: Digital Humanities Quarterly: Digital Geography and Classics. Changing the Center of Gravity: Transforming Classical Studies Through Cyberinfrastructure2009Volume 3 Number 1 Abstract The authors open by imagining one possible use of digital geographic techniques in the context of humanities research in 2017. They then outline the background to this vision, from early engagements in web-based mapping for the Classics to recent, fast-paced developments in web-based, collaborative geography.