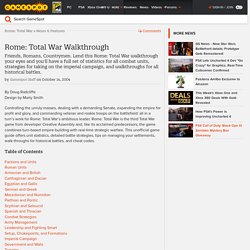 Rome: Total War is the third Total War game from developer Creative Assembly and, like its acclaimed predecessors, the game combines turn-based empire-building with real-time strategic warfare. This unofficial game guide offers unit statistics, detailed battle strategies, tips on managing your settlements, walk-throughs for historical battles, and cheat codes. Chapter 1 - Factions and Units This section reveals statistics for units from each faction in the game, including playable and non-playable factions. ATK: Attack. Roman Units These units include the three family factions (Julii, Brutii, and Scipii) as well as the S.P.Q.R. faction (Senate and People of Rome). 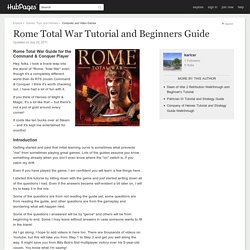 So signing a peace treaty with a faction will temporarily halt Julii and Scipii from attacking that faction? 36. So you can capture or control a Wonder? How do you do that? How many are there? It's quite possible no Wonders will be captured in the Julii campaign, as these territories are more in line with Brutii and Scipii expansion. 37. This has probably been covered before in these questions, but I will answer it again. 38. I would say it's not necessary. 39. No. 39a. 40. 41. 42. Not that I have been able to confirm. 43. 44. 45. GameSpy: Rome: Total War Strategy Guide - Page 1. By Dave 'Fargo' Kosak | Sep 26, 2004 How to apply the theories of "Smackus Maximus" to become the ultimate conqueror Let me set the scene: You're in your most comfortable chair, sitting in front of your PC, with the lights low, the significant other out of town, and the phone off the hook. 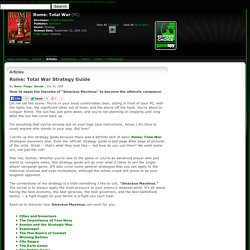 You're about to conquer Rome. The sun has just gone down, and you're not planning on stopping until long after the sun has come back up. I'm assuming that you've already put on your toga (see instructions, below.) Taw's blog: Rome Total War strategy guide. I'm not sure why but all strategy guides I've seen on the Internet suggest gameplay very different from how I've been playing. 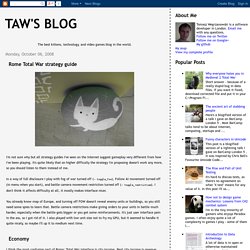 It's quite likely that on higher difficulty the strategy I'm proposing doesn't work any more, so you should listen to them instead of me. In a way of full disclosure I play with fog of war turned off (~ toggle_fow), Follow AI movement turned off (in menu when you start), and battle camera movement restriction turned off (~ toggle_restrictcam). I don't think it affects difficulty at all, it mostly makes interface nicer. You already know map of Europe, and turning off FOW doesn't reveal enemy units or buildings, so you still need some spies to learn that. 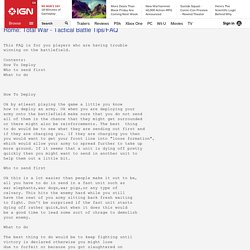 Contents: How To Deploy Who to send first What to do How To Deploy Ok by atleast playing the game a little you know how to deploy an army. Ok when you are deploying your army onto the battlefield make sure that you do not send all of them in the chance that they might get surrounded or there might also be reinforcements. The best thing to do would be to see what they are sending out first and if they are charging you.

If they are charging you then you would want to get your front line into "loose formation", which would allow your army to spread further to take up more ground. If it seems that a unit is dying off pretty quickly then you might want to send in another unit to help them out a little bit. IGN: Rome: Total War. Developed by The Creative Assembly, Rome: Total War is a revolutionary new title in the best-selling Total War series that carries players into the midst of ancient history's most intense conflicts. 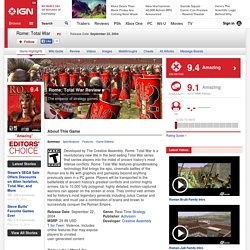 Rome: Total War features groundbreaking technology that brings the epic, cinematic battles of the Roman era to life with graphics and gameplay beyond anything previously seen in a PC game. Players will be transported to the battlefields of ancient history's greatest conflicts and control mighty armies. Up to 10,000 fully polygonal, highly detailed, motion-captured warriors can appear on the screen at once. They control vast armies led by history's most legendary generals including Julius Caesar and Hannibal, and must use a combination of brains and brawn to successfully conquer the Roman Empire.