I'm Spartacus - Spartacus (8/9) Movie CLIP (1960) HD. History - Ancient History in depth: Gladiator: Dressed to Kill Game. The History of Concrete - InterNACHI. By Nick Gromicko and Kenton Shepard The time period during which concrete was first invented depends on how one interprets the term “concrete.” 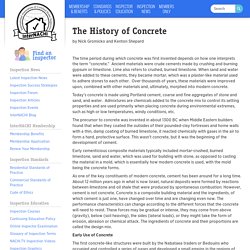 Ancient materials were crude cements made by crushing and burning gypsum or limestone. Lime also refers to crushed, burned limestone. When sand and water were added to these cements, they became mortar, which was a plaster-like material used to adhere stones to each other. Over thousands of years, these materials were improved upon, combined with other materials and, ultimately, morphed into modern concrete. Today’s concrete is made using Portland cement, coarse and fine aggregates of stone and sand, and water. The precursor to concrete was invented in about 1300 BC when Middle Eastern builders found that when they coated the outsides of their pounded-clay fortresses and home walls with a thin, damp coating of burned limestone, it reacted chemically with gases in the air to form a hard, protective surface.

History: Ancient Rome for Kids. Back to History for Kids Ancient Rome was a powerful and important civilization that ruled much of Europe for nearly 1000 years. 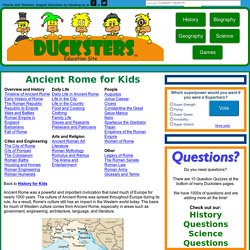 The culture of Ancient Rome was spread throughout Europe during its rule. As a result, Rome's culture still has an impact in the Western world today. The basis for much of Western culture comes from Ancient Rome, especially in areas such as government, engineering, architecture, language, and literature. The city of Rome is the capital of Italy today Map of Italy from the CIA World Factbook The Roman Republic. Famous Ancient Romans. 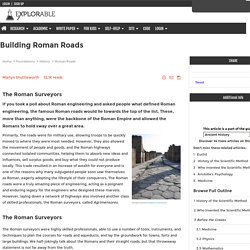 These, more than anything, were the backbone of the Roman Empire and allowed the Romans to hold sway over a great area. This article is a part of the guide: Discover 44 more articles on this topic Browse Full Outline Primarily, the roads were for military use, allowing troops to be quickly moved to where they were most needed. The Roman Surveyors The Roman surveyors were highly skilled professionals, able to use a number of tools, instruments, and techniques to plan the courses for roads and aqueducts, and lay the groundwork for towns, forts and large buildings.

Rome: Engineering an Empire. What the Romans Did For Us - 01/06. Roman Roads and Bridges. Ancient Romans The masters of advanced technology. School DT projects: Model Roman catapult. Newspaper Tower - Activity - www.teachengineering.org. Summary Student groups are challenged to design and construct model towers out of newspaper. 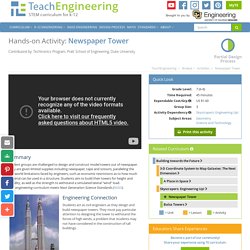 They are given limited supplies including newspaper, tape and scissors, paralleling the real-world limitations faced by engineers, such as economic restrictions as to how much material can be used in a structure. Students aim to build their towers for height and stability, as well as the strength to withstand a simulated lateral "wind" load. This engineering curriculum meets Next Generation Science Standards (NGSS). Engineering Connection. 3D.CITY. I'm Getting STEMmy: Building Aqueducts. At the end of the year I decided to build my entire Rome unit as a huge challenge (I'll blog on that later!). 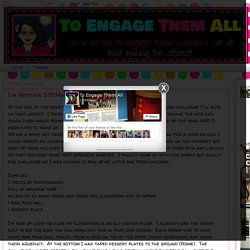 I tried to come up with different tasks that would engage the kids and teach them about Rome all the while trying to push through the end of the year AND 8 snow days to make up. We did a brief but thorough study on aqueducts and I racked my head for a week on how I could create an aqueduct building challenge. I found some great ones on the internet but most of them included water (I love my 7th graders but I don't trust them with any liquids) or they required some very expensive supplies. The STEM Aqueduct Challenge. My innovation is a lesson plan in which students construct a prototype aqueduct out of ordinary materials. 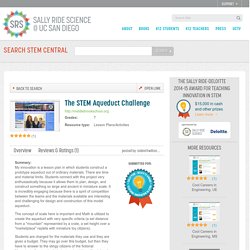 There are time and material limits. Students connect with this project very enthusiastically because it allows them to plan, design, and construct something so large and ancient in miniature scale. I-STEM aqueduct. Ancient Roman Aqueduct Video - Ancient Rome. You're almost done! 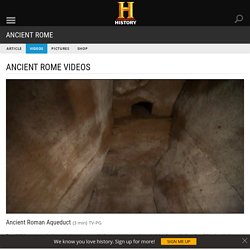 Khanacademy. Ancient Rome (1of8): The Rise of the Roman Empire. 23 traits of good leaders. Social Studies + STEM = Aqueducts Rebuilt! As a social studies teacher, the importance of integrating social studies into STEM seems all to obvious. 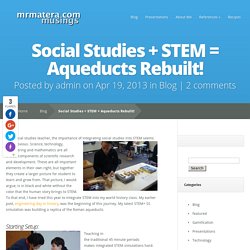 To that end, I have tried this year to integrate STEM into my world history class. Starting Setup: Teaching in the traditional 45 minute periods makes integrated STEM simulations hard. Justice Education Society of BC. There are a number of mock trials available for your use during the mock trial program. 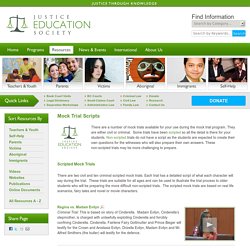 They are either civil or criminal. Some trials have been scripted so all the detail is there for your students. ElectroCity - Game. Justice Education Society of BC. Plan It Green Build a City Game.