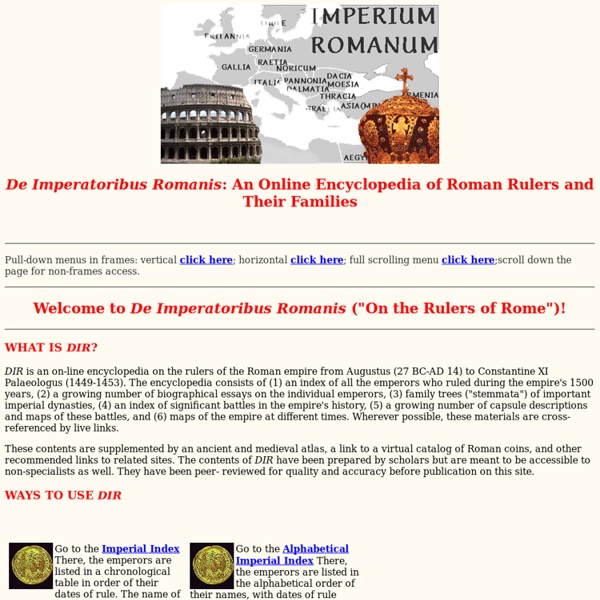 De Imperatoribus Romanis: An Online Encyclopedia of Roman Rulers and Their Families Pull-down menus in frames: vertical click here; horizontal click here; full scrolling menu click here;scroll down the page for non-frames access. Welcome to De Imperatoribus Romanis ("On the Rulers of Rome")! DIR is an on-line encyclopedia on the rulers of the Roman empire from Augustus (27 BC-AD 14) to Constantine XI Palaeologus (1449-1453). The encyclopedia consists of (1) an index of all the emperors who ruled during the empire's 1500 years, (2) a growing number of biographical essays on the individual emperors, (3) family trees ("stemmata") of important imperial dynasties, (4) an index of significant battles in the empire's history, (5) a growing number of capsule descriptions and maps of these battles, and (6) maps of the empire at different times. Wherever possible, these materials are cross-referenced by live links.

Secrets of Lost Empires Welcome to the companion Web site to the NOVA program "Roman Bath," scheduled for rebroadcast on January 31, 2006. In the film, which is a part of the NOVA series Secrets of Lost Empires, an international crew of archeologists, engineers, and historians designs, builds, and tests a functioning Roman bath in the Turkish countryside. Here's what you'll find online: A Day at the Baths Wander through the frigidarium, tepidarium, caldarium, and other vital rooms in our online reconstruction of the famous Baths of Caracalla. Construct an Aqueduct (Hot Science) The Emperor has appointed you Chief Water Engineer on an aqueduct-building project.

Rome Rome (/ˈroʊm/; Italian: Roma pronounced [ˈroːma] ( ); Latin: Rōma) is a city and special comune (named "Roma Capitale") in Italy. Rome is the capital of Italy and also of the Province of Rome and of the region of Lazio. With 2.7 million residents in 1,285.3 km2 (496.3 sq mi), it is also the country's largest and most populated comune and fourth-most populous city in the European Union by population within city limits. The Roman Empire As of July 1, 2013 ThinkQuest has been discontinued. We would like to thank everyone for being a part of the ThinkQuest global community: Students - For your limitless creativity and innovation, which inspires us all. Keats-Shelley Memorial House Coordinates: The Keats-Shelley House in Rome The Keats-Shelley Memorial House is a museum in Rome, Italy, commemorating the Romantic poets John Keats and Percy Bysshe Shelley.

Egyptian pyramids found by infra-red satellite images Seventeen lost pyramids are among the buildings identified in a new satellite survey of Egypt. More than 1,000 tombs and 3,000 ancient settlements were also revealed by looking at infra-red images which show up underground buildings. Initial excavations have already confirmed some of the findings, including two suspected pyramids. The work has been pioneered at the University of Alabama at Birmingham by US Egyptologist Dr Sarah Parcak. Spanish Steps The Spanish Steps (Italian: Scalinata della Trinità dei Monti) are a set of steps in Rome, Italy, climbing a steep slope between the Piazza di Spagna at the base and Piazza Trinità dei Monti, dominated by the Trinità dei Monti church at the top. The Scalinata is the widest staircase in Europe.[1] History[edit] Following a competition in 1717 the steps were designed by the little-known Francesco de Sanctis,[2] though Alessandro Specchi was long thought to have produced the winning entry.

Acupuncture 5,200 Years Ago? Acupuncture 5,200 Years Ago? The Tyrolean Iceman died in the Alps about 5,200 years ago, but his mummified body is exceptionally well-preserved -- so well-preserved that 15 groups of tattoo marks on his body stand out vividly. These punctures do not seem to be ornamental, like those on a sailor's biceps, nor are they on parts of the body usually displayed. Pliny the Elder For my part I deem those blessed to whom, by favour of the gods, it has been granted either to do what is worth writing of, or to write what is worth reading; above measure blessed those on whom both gifts have been conferred. In the latter number will be my uncle, by virtue of his own and of your compositions.[1] Pliny is referring to the fact that Tacitus relied on his uncle's now missing work on the History of the German Wars.

The Piri Re‘is map of 1513 The controversial Piri Re’s map The map drawn by Piri Re‘is dated to the month of Muharrem 919 AH (corresponding to spring 1513 CE) is well known in the fringe literature. Piri Re‘is was an admiral of the Turkish navy and this map, showing the Atlantic Ocean, West Africa, the Iberian Peninsula and lands on the western side of the Ocean, seems to have been based on twenty different maps. One of them has been thought to be a copy of the lost map made by Christopher Columbus, as Piri’s own annotations claim as much. The map was rediscovered by the Director of National Museums, Halil Etem Edhem (1861-1938), when the Topkapi Serail Palace in Istanbul was being converted into a museum in 1929. The map was subsequently studied by a prominent German orientalist, Paul Kalhe (1875-1964), who reported on it at the eighteenth Congress of Oriental Studies in Leiden in 1931.

Vatican Museums The Vatican Museums (Italian: Musei Vaticani) are the museums of the Vatican City and are located within the city's boundaries. They display works from the immense collection built up by the Roman Catholic Church throughout the centuries including some of the most renowned classical sculptures and most important masterpieces of Renaissance art in the world. Pope Julius II founded the museums in the early 16th century. The Sistine Chapel with its ceiling decorated by Michelangelo and the Stanze della Segnatura decorated by Raphael are on the visitor route through the Vatican Museums.

Göbekli Tepe Archeology Lately, I've come across a number of stories in the news about very ancient archeological sites, which pre-date the Egyptian Pyramids by a fair bit. Although some very ancient sites are known (for example, the oldest remains in Jericho have been dated to about 9000 BC), I was under the impression that these were very fragmentary (perhaps known only by a hearth fire or a few stone structures), and little detailed information exists. Gobekli Tepe is located in southern Turkey, just north of the Syrian border. I've seen several other intriguing reports about very ancient sites in the Gulf of Cambay in India, Syria, etc. But the site at Göbekli Tepe in Turkey seems to be the most ancient and also relatively well studied, so I decided to collect what information I could find about it.