Ostia - Introduction. 1 Introduction The ancient Roman city of Ostia was in antiquity situated at the mouth of the river Tiber, some 30 kilometres to the west of Rome. 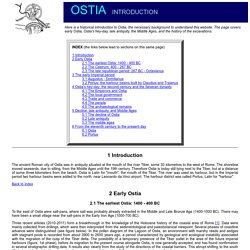 The shoreline moved seawards, due to silting, from the Middle Ages until the 19th century. Therefore Ostia is today still lying next to the Tiber, but at a distance of some three kilometers from the beach. Ostia Antica. Founded to defend the Tiber river Tradition says that Ostia was founded by Ancus Marcius, the 4th king of Rome, who lived during the second half of the 7th century B.C., even if - till today - there is little archeological evidence corroborating such information. 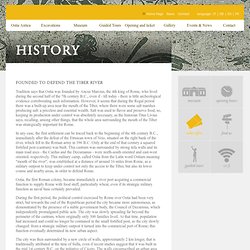 However, it seems that during the Regal period there was a built-up area near the mouth of the Tiber, where there were some salt marshes producing salt: a priceless and essential wealth. LIFE at the Vatican: Unearthing History Beneath St. Peter’s. Architecture & Design '50s The walled, pint-sized city-state known as the Vatican physically takes up around 100 acres in the center of Rome, but occupies a vast, measureless space in the lives of more than a billion practicing Catholics around the globe. 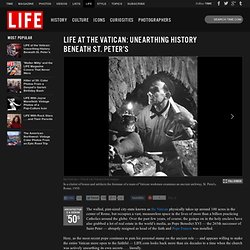 Over the past few years, of course, the goings on in the holy enclave have also grabbed a lot of real estate in the world’s media, as Pope Benedict XVI — the 265th successor of Saint Peter — abruptly resigned as head of the faith and Pope Francis was installed. Here, as the most recent pope continues to puts his personal stamp on the ancient role — and appears willing to make the entire Vatican more open to the faithful — LIFE.com looks back more than six decades to a time when the church was actively unearthing its own secrets . . . literally.

The History of Rome. ‎www.mariamilani.com/rome_italy/italy_rome.htm. | About Rome | Rome's History | Rome in a Day | Rome in a Weekend | Rome in a Week |Rome by Squares | Rome by Obelisks and Columns |Rome Timeline | Some ideas for walks and tours of Rome: I had had little time to waste and wanted a short walk to get the main flavour of the city where would I go? 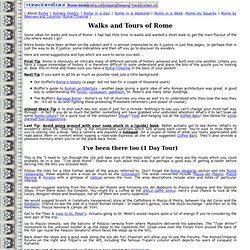 Entire books have been written on the subject and it is almost impossible to do it justice in just few pages, or perhaps that is just the way to do it justice: some indications and then off you go to discover its wonders. Here are some suggestions and tips which are sure to serve you well…. First Tip. Rome is obviously an intricate mass of different periods of history annexed and built over one another. Next Tip If you want to ad lib as much as possible read just a little background: Our bluffer's Rome's history (a page: but not bad for a couple of thousand years) Bluffer's guide to Roman architecture - another page giving a quick idea of why Roman architecture was great. Lacus curtius platner. A 1929 Topography of Ancient Rome (on this website, part of Topographia Vrbis Romæ) Samuel Ball Platner: A Topographical Dictionary of Ancient Rome London: Oxford University Press, 1929. 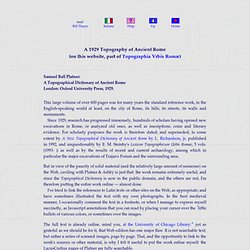 This large volume of over 600 pages was for many years the standard reference work, in the English-speaking world at least, on the city of Rome, its hills, its streets, its walls and monuments. Since 1929, research has progressed immensely, hundreds of scholars having opened new excavations in Rome, or analyzed old ones, as well as inscriptions, coins and literary evidence. For scholarly purposes the work is therefore dated; and superseded, to some extent by A New Topographical Dictionary of Ancient Rome by L. Richardson, jr, published in 1992, and unquestionably by E. I've tried to link the references to Latin texts or other sites on the Web, as appropriate; and have sometimes illustrated the text with my own photographs. Articles transcribed on my site (major articles are in boldface): "The architecture of Maxentius: A study in architectural design and urb" by Elisha Ann Dumser. Elisha Ann Dumser, University of Pennsylvania Abstract Maxentius erected an impressive trio of monuments along Rome's Sacra Via—the Basilica Nova, the templum Romae, and the Rotunda Complex (“so-called Temple of Romulus”)—within his brief, six-year reign. 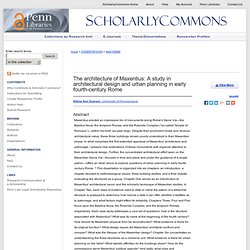 Despite their prominent locale and obvious architectural value, these three buildings remain poorly understood in their Maxentian phase. In what comprises the first extended appraisal of Maxentius' architecture and patronage, I present new restorations of these monuments with especial attention to their architectural design. Subject Area Art History|Architecture|Urban and Regional Planning Recommended Citation Elisha Ann Dumser, "The architecture of Maxentius: A study in architectural design and urban planning in early fourth-century Rome" (January 1, 2005). The History of Rome. ‎www.ryanair.com/doc/apt/transfer-schedule/CIA.pdf. Roma Pass. International Catacomb Society: Visiting the Christian Catacombs of Rome. 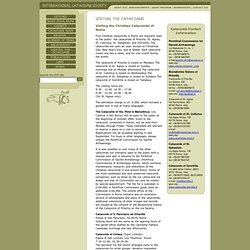 Agnes, St. Callixtus, St. Sebastian, and Domitilla. The catacombs are open all year, except on Christmas Day, New Year's Day, and at Easter.