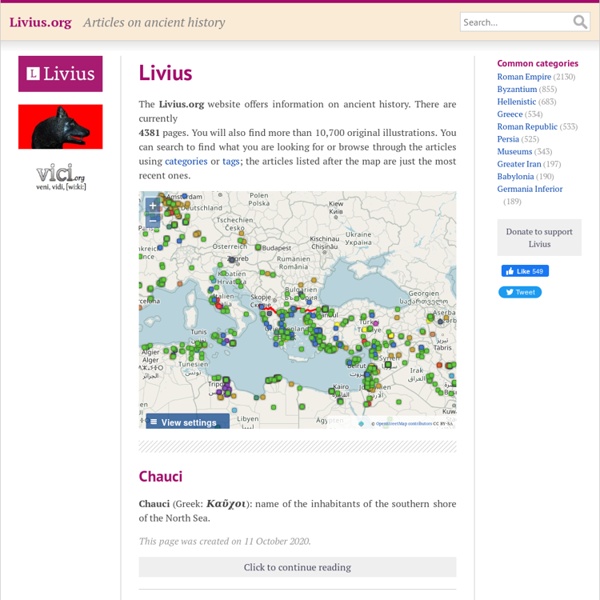 The Livius.org website offers articles on ancient history. We are currently improving the site, which has more than 3650 pages. At the moment, there are 460 articles in the new style. You can search to find what you are looking for or browse through the articles using categories or tags. The pages that were most recently converted to the new style, are listed below. Map DataImagery ©2014 NASA, TerraMetrics

ChronoZoom ChronoZoom is an educational tool for teachers and students who want to put historical events in perspective. A great many resources have been created already in ChronoZoom for your enjoyment and enlightenment. Start Exploring Magna Carta: Cornerstone of the U.S. Constitution At the death of his brother, Richard the Lionhearted, John assumed the throne of England, intent on exercising power to achieve his own selfish ends. To fund military campaigns in France, he extracted exorbitant fees from nobles, who, in turn, raised the rents imposed on their tenants. At the same time, John reduced the lords' customary powers over those tenants, restricting, for example, their power to hold court for those living on their feudal lands. He attempted to influence church elections and confiscated church properties, alienating the powerful ecclesiastical establishment and depriving the poor of the only source of relief available to paupers. He restricted trading privileges traditionally granted to London's merchants and increased their taxes, alienating this constituency as well. King John's tyrannical practices extended to demanding sexual favors from the wives and daughters of his barons and to imposing brutal punishments on individuals who challenged his authority.

stle Builder Image Copyright 1995 by Educational Management Group, Inc. During the Medieval era of history, life was lived by a very different set of political, economic, and social rules. The only form of government was a Monarchy where the king or queen ruled by "divine right." "Divine right" simply meant that God appointed the king or queen to rule with absolute power. The main economic system was Feudalism in which the king appointed a baron or knight to oversee a portion of his land in return for loyalty and protection in case of invasion.

Ancient Roman History Timeline Provides a chronological index of the history of Ancient Rome with extensive links to internet resources. Emphasis is placed upon the use of primary source material, numismatics, and a focus upon the roles of women in ancient time. scroll down for the timeline Thank you for visiting! Timeline Menu Secrets of Lost Empires Welcome to the companion Web site to the NOVA program "Medieval Siege," scheduled for broadcast on January 24, 2006. In the film, which is a part of the NOVA series Secrets of Lost Empires, a team of timber framers and other specialists design, build, and fire a pair of trebuchets, a devastating engine of war popular in the Middle Ages. Here's what you'll find online: Medieval Arms Race The trebuchet was only the most frightening of the weapons early European warriors employed in siege warfare. They also relied on battering rams, siege towers, tunnels - anything to gain access to a castle. Defenders, meanwhile, had a few tricks of their own.