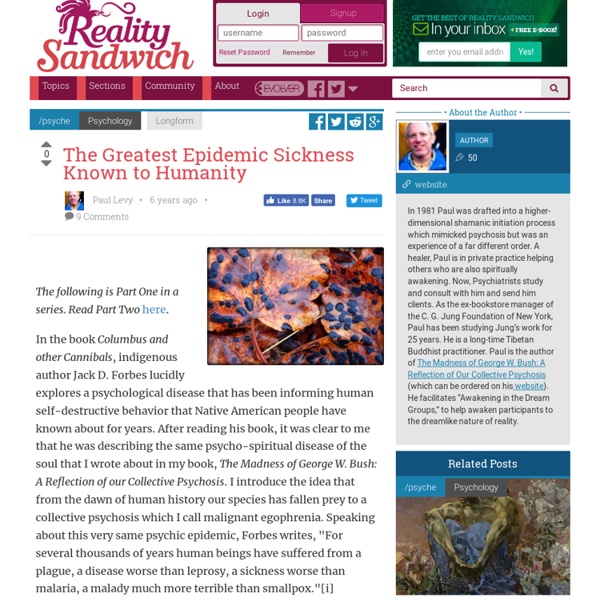 The following is Part One in a series. Read Part Two here. In the book Columbus and other Cannibals, indigenous author Jack D. Forbes lucidly explores a psychological disease that has been informing human self-destructive behavior that Native American people have known about for years. After reading his book, it was clear to me that he was describing the same psycho-spiritual disease of the soul that I wrote about in my book, The Madness of George W. Bush: A Reflection of our Collective Psychosis. As if performing a magic ritual, in exploring the entity of wetiko, we first have to invoke its spirit and enter into relationship with it. After evoking an entity like wetiko, in order to study it as objectively as possible, we have to hermetically seal it within an alchemical container. A Disease of Civilization Wetiko/malignant egophrenia is a disease of civilization, or lack thereof. A Parasite of a Different Order Alien Intrusion To quote Don Juan, "Indeed we are held prisoner! Vampires

Seeing Wetiko: On Capitalism, Mind Viruses, and Antidotes for a World in Transition It’s delicate confronting these priests of the golden bullThey preach from the pulpit of the bottom lineTheir minds rustle with million dollar billsYou say Silver burns a hole in your pocketAnd Gold burns a hole in your soulWell, uranium burns a hole in foreverIt just gets out of control. – Buffy Sainte-Marie, “The Priests of the Golden Bull”1 What if we told you that humanity is being driven to the brink of extinction by an illness? That all the poverty, the climate devastation, the perpetual war, and consumption fetishism we see all around us have roots in a mass psychological infection? What if we went on to say that this infection is not just highly communicable but also self-replicating, according to the laws of cultural evolution, and that it remains so clandestine in our psyches that most hosts will, as a condition of their infected state, vehemently deny that they are infected? What if we then told you that this ‘mind virus’ can be described as a form of cannibalism.

The Path of the Sacred Clown: Where Trickster and Shaman Converge “If the fool would persist in his folly, he would become wise.” –William Blake Most of us are familiar with the prototypical clowns: red-nosed clowns, court jesters, and Tarot fools. But sacred clowns take clowning to a whole other level. A Painful Incredulity: Psychopathy and Cognitive Dissonance Almost everyone involved with a psychopath goes through a phase (and form) of denial. It’s very tough to accept the sad reality that the person who claimed to be your best friend or the love of your life is actually a backstabbing snake whose sole purpose in life is humiliating and dominating those around him. Rather than confront this reality, some victims go into denial entirely. They aren’t ready to accept any part of the truth, which, when suppressed, often surfaces in anxiety, projection and nightmares. At some point, however, the evidence of a highly disturbed personality shows through, especially once the psychopath is no longer invested in a given victim and thus no longer makes a significant effort to keep his mask on. Then total denial is no longer possible.

Vampire Squid Economics: A Case Study in Full-Blown Wetiko Disease The following is Part Two of a series. Read Part One here. In Part One of this article, I contemplated a psycho-spiritual disease of the soul that I call malignant egophrenia and indigenous people call wetiko which is undermining the evolutionary development of our species. Hearth Moon Rising's blog Cybele, Rome 50 b.c.e.photo Marshall Astor This week’s goddess is Cybele (pronounced kye-bell), whose sacred tree is the pine. Cybele is the earth mother goddess of what is now western Turkey, who had a popular and longstanding cult that eventually spread to Rome. She had a lover named Attis, who was also her grandson, whom she loved very much, and she showered him with gifts and attention.

Understanding How Sociopaths Think: Why It is Good to Ask Why Sociopaths must spend their entire lives watching others and learning to imitate behaviors that they are unable to engage in naturally. So often during this recovery process, I have been told by others—those who have been targeted by sociopaths and those who have not—that it does not matter why the sociopath did what he did. Focus on you, they said. Mind Virus Wetiko: Collective Shadow of Humanity Every human alive has a shadow or a kind of mind virus (also called wetiko) which sets up our external life situations while hiding within. that plagues all of humanity – every man, woman and child – at first may seem like a far out concept, but it’s an idea that has been around a long time in a lot of different cultures. Religion has grappled with the problem of evil for aeons. Deep down the rabbit hole of conspiracy research you will eventually get to the same theme – that there is some dark force coordinating the many nefarious schemes and agendas we witness daily in our world.

The Middle Way Back to list "The Middle Way should not be confused with passivity or a kind of middle-of-the-road compromise. To tread the Middle Way rather implies ongoing effort. In the broadest sense, the Middle Way refers to the correct view of life that the Buddha teaches, and to the actions or attitudes that will create happiness for oneself and others." The Middle Way is a Buddhist term with rich connotations.

Basic Concepts to Understand Psychopathy As psychologist Martha Stout has pointed out so eloquently, psychopaths seem to be born without a conscience. Conscience seems to depend on the ability to imagine consequences. But most "consequences" relate to pain in some way, and psychopaths really don't understand pain in the emotional sense. They understand frustration of not getting what they want, and to them, that is pain. But the fact seems to be that they act based solely on a sort of Game Theory evaluation of a situation: what will they get out of it, and what will it cost?

INTRO TO “WETIKO”: CLOSE ENCOUNTERS OF THE WETIKO KIND I’ve been dreaming about this book you now hold in your hands since my first book, The Madness of George W. Bush: A Reflection of our Collective Psychosis [i] came out in 2006. I’ve been wanting to elaborate and deepen my inquiry and articulation of the psychological disease that I wrote about in that book, but without having to reference or think about George W. Bush (what a relief!). There is a psycho-spiritual disease of the soul whose origin is within ourselves that has the potential either to destroy our species or wake us up, depending upon whether or not we recognize what it is revealing to us. Etrog An Israeli etrog, with pitam and gartel (ridge around the center) Taxonomy[edit] Etymology[edit] Erased but not Forgotten: Psychopaths and Emotional Memory Please welcome a post on psychopaths and emotional memory by our guest blogger, Michael Pacitti, who writes both from his personal experience with a psychopath and from his experience as a mental health professional. This article explains a seeming paradox: how psychopaths can simultaneously move on from previous relationships and discard their partners so unfeelingly, as if their memories of the relationships were erased, yet still continue to harass and stalk some of their previous targets, in a kind of perpetual relationship boomerang. Hence the title we chose: Erased but Not Forgotten. I listened to a song playing on the radio quite recently, a U2 track from their album “how to dismantle an atomic bomb”; the song is called A Man and a Woman.

IT’S ALL IN THE PSYCHE The underlying source of what is playing out on the world stage is the unconscious psyche of humanity. However, because of its obviousness, this fact goes unnoticed by most people. Jung said, “The psyche is the greatest of all cosmic wonders and the “sin qua non” [indispensable ingredient] of the world as an object.