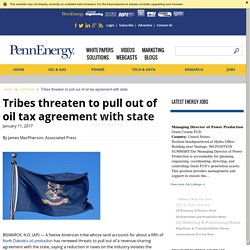 (AP) — A Native American tribe whose land accounts for about a fifth of North Dakota's oil production has renewed threats to pull out of a revenue-sharing agreement with the state, saying a reduction in taxes on the industry violates the accord. "We're not bluffing," Three Affiliated Tribes Chairman Mark Fox told the North Dakota House's Finance and Taxation Committee on Tuesday.

The panel is examining legislation, introduced by Republican House Majority Leader Al Carlson that would cut tax increases for producers if oil prices rebound above $90 a barrel, which is nearly twice was North Dakota sweet crude was fetching Tuesday. [Native Advertisement] Fighting for Our Lives: #NoDAPL in Historical Context. By Nick Estes Little has been written about the historical relationship between the movement against the Dakota Access Pipeline and the longer histories of Oceti Sakowin (The Great Sioux Nation) resistance against the trespass of settlers, dams, and pipelines across the Mni Sose, the Missouri River. 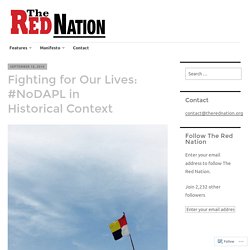 This is a short analysis of the historical and political context of the #NoDAPL movement and the transformative possibilities of the current struggle. Thousands have camped along the banks of the Missouri River at Cannon Ball in the Standing Rock Sioux Indian Reservation to halt the construction of the Dakota Access Pipeline (DAPL), which promises to carry half a million barrels of heavy crude oil a day across four states, under the Missouri River twice, and under the Mississippi River toward the Gulf of Mexico for global export.

How and why did this happen? South Dakota and North Dakota statehood also played a major role in suppressing the Oceti Sakowin. Standing Rock Is Safe, But DAPL Still Needs to Cross a River. On Sunday, the US Army Corp of Engineers blocked the Dakota Access Pipeline’s passage through Sioux Standing Rock reservation. 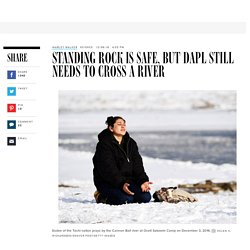 This marks a victory for protestors who have been camped out for eight months on the Cannon Ball Native American tribal land—the $3.7 billion dollar pipe was supposed to pump 450,000 barrels of crude oil a day under the Missouri River just north of the reservation. If the pipeline were built, it could burst and threaten the tribe’s water. This is the third time the Army Corps has rerouted the DAPL. You might not have known that, because those other two times were not preceded by national outcry.

They happened, though, for the same essential reasons: because the Army Corps decided that the pipe’s route was environmentally unsafe. Lawrence Hatter: Stop dismissing Standing Rock Sioux as dupes. Taking a leaf from a political playbook as old as the American Republic, then-Lt. 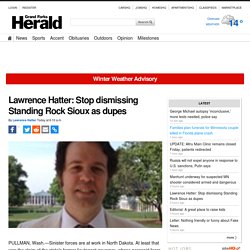 Gov. Drew Wrigley dismissed the Standing Rock Sioux opposition to the planned oil pipeline in that state as the work of ominous powers. "The Native Americans are being used, absolutely being used," Wrigley told reporters Dec. 8, "by these outside agitators. " His statement could just have easily have been made in 1786 as 2016. Native Americans fight Texas pipeline using ‘same model as Standing Rock’ The Two Rivers camp, protesting the Trans-Pecos pipeline, is the latest sign that the Standing Rock movement is inspiring indigenous-led activism across the US by Sam Levin, The Guardian, January 9, 2017 Indigenous activists have set up camps in the Texas desert to fight a pipeline project there, the latest sign that the Standing Rock “water protector” movement is inspiring Native American-led environmental protests across the US. 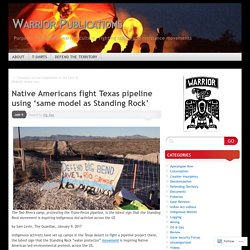 The Two Rivers camp, located south of Marfa near the border, has attracted dozens of demonstrators in its first week to protest the Trans-Pecos pipeline, a 148-mile project on track to transport fracked natural gas through the Big Bend region to Mexico. Citing concerns about damage to the environment and sacred indigenous sites, the camp parallels the high-profile effort to block the Dakota Access pipeline (DAPL) and is one of multiple Native American land campaigns building on the momentum of the demonstrations in North Dakota.

Backslash: Anti-surveillance gadgets for protesters. When riot police descended on protesters in Ferguson, Missouri, last year sporting assault rifles and armored vehicles, the images sparked an awareness of the military technologies and tactics authorities have adopted over the past decade. 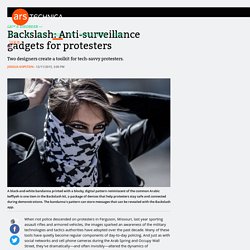 Many of these tools have quietly become regular components of day-to-day policing. And just as with social networks and cell phone cameras during the Arab Spring and Occupy Wall Street, they've dramatically—and often invisibly—altered the dynamics of contemporary protest. EPA Region 8: Children’s Environmental Health in Mountain & Plains States. Choose from the resources below to learn about children’s environmental health hazards in Colorado, Montana, North Dakota, South Dakota, Utah, Wyoming, and 27 Tribal Nations. 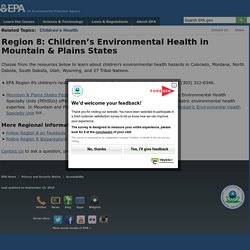 EPA Region 8’s children’s health coordinator is Kim Bartels (bartels.kim@epa.gov) at (303) 312-6346. Mountain & Plains States Pediatric Environmental Health Specialty Unit: Exit Pediatric Environmental Health Specialty Units (PEHSUs) offer local health care providers and parents access to pediatric environmental health expertise. Water Quality Standards: Regulations and Resources. Dreams and thunder. To tell the history of Indigenous feminism, we have to acknowledge that such a history can’t be easily distilled down to a few pages or simply based on the origins we think we know and understand about Indigenous women and their communities. 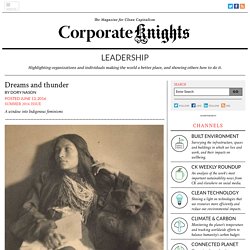 Indeed, in narrating this history, we have to set aside the notion that feminism for Indigenous women begins as an outgrowth of white liberal feminist movements or as necessarily parasitic on feminist movements in the global south or by women of colour. Indigenous feminisms are generated within social and historical contexts that are distinctly Indigenous. Here are two key moments in the history of Indigenous women’s organizing, one before and one after the destruction of the world as they knew it. ENERGY: TRIBAL INTERESTS. Native American Nations. The Department of the Interior has a solemn responsibility to uphold the federal government's unique government-to-government relationship with federally recognized American Indian and Alaska Native tribes, as provided for by the Constitution of the United States, U.S. treaties and court decisions, presidential executive orders and federal policies and administrative actions. 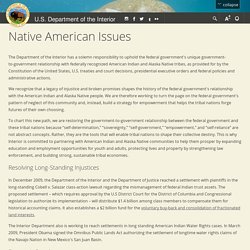 We recognize that a legacy of injustice and broken promises shapes the history of the federal government's relationship with the American Indian and Alaska Native people. We are therefore working to turn the page on the federal government's pattern of neglect of this community and, instead, build a strategy for empowerment that helps the tribal nations forge futures of their own choosing.

When it comes to the rights of people of color in the US, government officials often side with corporations and Wall Street, said Solomon Comissiong, founder of the Your World News’ Media Collective. 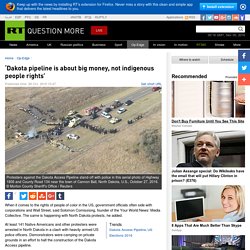 The same is happening with North Dakota protests, he added. At least 141 Native Americans and other protesters were arrested in North Dakota in a clash with heavily armed US police officers. ENERGY: LEGISLATION & LAWS, TRIBAL INTERESTS. Going to Standing Rock - standing rock solidarity network. United Nations Declaration of the Rights of Indigenous Peoples. The Standing Rock Syllabus Project. How to Talk About #NoDAPL: A Native Perspective. Stacey Alkire of the Standing Rock Sioux Tribe, who has been at the campsite set up to protest the Dakota Access oil pipeline for five weeks, near Cannon Ball, North Dakota, on October 8, 2016. (Photo: Kristina Barker / The New York Times) An earlier version of this piece appeared on Transformative Spaces. The public witnessed a new level of escalation on Thursday in the Native struggle at Standing Rock, as police swept through an encampment in the direct path of the Dakota Access pipeline (DAPL).

On a beautiful sunny day in June, 2014 President Barack Obama came to the banks of the Cannonball River on the Standing Rock Sioux Reservation. June is the month of the Strawberry Moon and celebrates the first harvest of wild fruit. The occasion was Cannonball Flag day and Native Americans from Standing Rock and the Cheyenne River Sioux Reservations turned out to welcome the President. For one day the hills and buttes and prairies of North and South Dakota were the center of rare media attention, and the people who welcomed the President into their homes and hearts were ecstatic. Michelle Obama was with him, babies were thrust into their arms for photo ops, children danced, and a powwow sealed good will and belief in the promises Obama made to the Sioux nation. Alternative Dakota Access Pipeline Route Would Cross More Tribally Owned Land and Bodies of Water - Standing Rock Fact Checker.

Dakota Access protestors have been highly critical of the pipeline’s proximity to the Standing Rock Sioux Reservation – despite the reality that the project does not cross Reservation land at all. According to the Environmental Assessment (EA) conducted by the US Army Corps of Engineers, the “Lake Oahe crossing will be installed via HDD beneath the river from private lands adjacent to Corps owned lands.” “The Proposed Action and Connected Actions and associated cumulative effects where practicable have been co-located with existing utilities and across USACE easements and fee owned property. The DAPL Project avoids crossing Tribal reservation lands across its entire length. Land Grab Cheats North Dakota Tribes Out of $1 Billion, Suits Allege. But that last-resort land turns out to hold a wealth of oil, because it sits on the Bakken Shale, widely believed to be one of the world's largest deposits of crude. Until recently, that oil was difficult to extract, but hydraulic fracturing, combined with the ability to drill a well sideways underground, can tap it.

The result, according to several senior tribal members and lawsuits filed last November and early this year in federal and state courts, has been a land grab involving everyone from tribal leaders accused of enriching themselves at the expense of their people, to oil speculators, to a New York hedge fund, to the federal government's Bureau of Indian Affairs. The rush to get access to oil on tribal lands is part of the oil industry's larger push to secure drilling rights across the United States. Recent estimates show that the U.S. contains vast quantities of oil and gas. Wilkinson declined to comment and Woodward could not be reached. Johnny Cash’s Little-Known Fight for Native Americans. North Dakota activates National Guard to protect the pipeline instead of our tribes. The sacred land at the heart of Dakota pipeline fight.