Indigenous Knowledge Systems / Alaska Native Ways of Knowing. By Ray Barnhardt and Angayuqaq Oscar Kawagley This is an excerpt from a longer paper which is available, along with many other excellent resources, on the Alaska Native Knowledge Network . 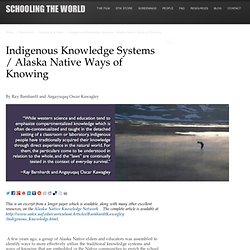 The complete article is available at A few years ago, a group of Alaska Native elders and educators was assembled to identify ways to more effectively utilize the traditional knowledge systems and ways of knowing that are embedded in the Native communities to enrich the school curriculum and enliven the learning experiences of the students. After listening for two days to lengthy discussions of topics such as indigenous world views, Native ways of knowing, cultural and intellectual property rights and traditional ecological knowledge, an Inupiaq elder stood up and explained through an interpreter that he was going to describe how he and his brother were taught to hunt caribou by their father, before guns were commonplace in the upper Kobuk River area of northern Alaska. 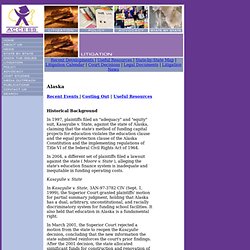 State, against the state of Alaska, claiming that the state's method of funding capital projects for education violates the education clause and the equal protection clause of the Alaska Constitution and the implementing regulations of Title VI of the federal Civil Rights Act of 1964. In 2004, a different set of plaintiffs filed a lawsuit against the state ( Moore v. 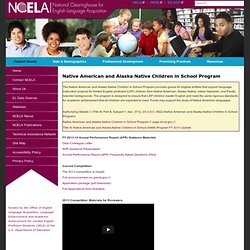 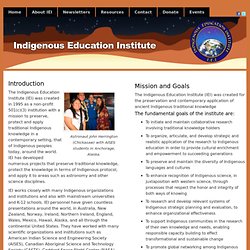 It is a pleasure to invite you to browse through our newly updated website. I want to express my deep gratitude to our Webmaster, Christopher Teren, for his patience and leadership in this endeavor. As you will see, IEI is involved in a number of projects, all chosen in alignment with our mission and goals. I want to extend my thanks to the wonderful people who are associated with IEI, in particular the Board of Directors, as led by Dr. 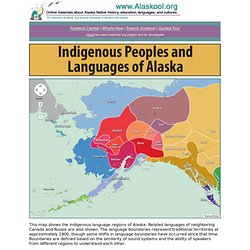 Related languages of neighboring Canada and Russia are also shown. The language boundaries represent traditional territories at approximately 1900, though some shifts in language boundaries have occurred since that time. Boundaries are defined based on the similarity of sound systems and the ability of speakers from different regions to understand each other. The colors of the individual languages reflect their classification into language families, each of which share a common ancestral language.

Eighteen of the twenty indigenous Alaska languages on this map belong to either the Eskimo-Aleut or the Athabascan-Eyak-Tlingit families. The language names appearing on this map are the English names generally accepted by most speakers today. As of 2010 few indigenous languages in Alaska are still spoken by children, but significant revitalization programs exist for some languages. Show more... Copyright © 2011. Alaska Indigenous. In June 2010, the National Governors Association Center for Best Practices and the Council of Chief State School Officers published the Common Core State Standards (CCSS) for K-12 English language arts and math. 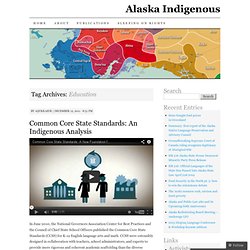 CCSS were ostensibly designed in collaboration with teachers, school administrators, and experts to provide more rigorous and coherent academic scaffolding than the diverse patchwork of state standards previously in place. According to the Common Core State Standards Initiative, these standards were designed to “prepare our children for college and the workforce,” and since June 2010, 48 states and the District of Columbia have adopted them (Common Core State Standards Initiative, 2011). Although not explicitly identifying CCSS, the Obama administration has endorsed and incentivized state adoption of internationally benchmarked academic standards that prepare students for college and career readiness through its Race to the Top program. Arguments and Evidence for CCSS Conclusion. What is Indigenous Knowledge - Definition - Bibliography - Links. What is Indigenous Knowledge? 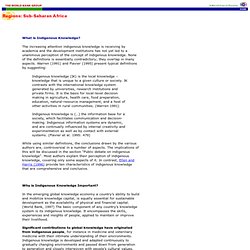 The increasing attention indigenous knowledge is receiving by academia and the development institutions has not yet led to a unanimous perception of the concept of indigenous knowledge. None of the definitions is essentially contradictory; they overlap in many aspects. Warren (1991) and Flavier (1995) present typical definitions by suggesting: Indigenous knowledge (IK) is the local knowledge – knowledge that is unique to a given culture or society. IK contrasts with the international knowledge system generated by universities, research institutions and private firms. While using similar definitions, the conclusions drawn by the various authors are, controversial in a number of aspects. 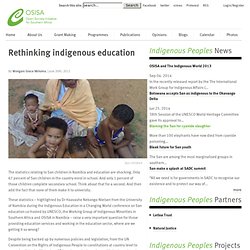 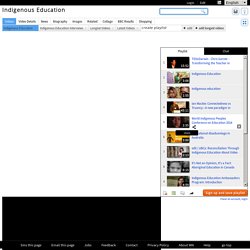 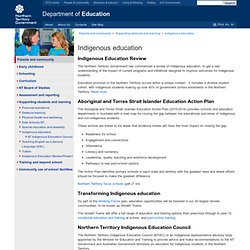 Education provision in the Northern Territory occurs within a unique context. It includes a diverse student cohort, with Indigenous students making up over 40% of government school enrolments in the Northern Territory. Read more. IMPORTANCE OF INDIGENOUS EDUCATION AND CULTURE HIGHLIGHTED, AS PERMANENT FORUM CONTINUES SECOND SESSION. Permanent Forum on Indigenous Issues Second Session 15th & 16th Meetings (AM & PM) The importance of educating youth in their own cultures, as well as using indigenous languages to educate them, was stressed today during the discussion on culture and education in the Permanent Forum on Indigenous Issues.

Opening the discussion, a representative of the United Nations Scientific, Educational and Cultural Organization (UNESCO) observed that millions of children continued to be taught in languages they did not use or even understand.