11 Indigenous resistance movements you need to know. "Time is not on our side…leaders must act," Fortunately, Indigenous people have been organizing against the negative impacts of resource extraction since contact... 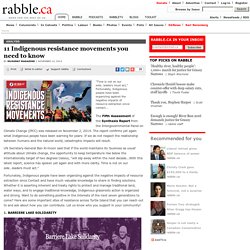 The Fifth Assessment of the Synthesis Report from the Intergovernmental Panel on Climate Change (IPCC) was released on November 2, 2014. The report confirms yet again what Indigenous people have been warning for years: If we do not respect the relationship between humans and the natural world, catastrophic impacts will result. UN Secretary-General Ban Ki-moon said that if the world maintains its 'business as usual' attitude about climate change, the opportunity to keep temperature rise below the internationally target of two degrees Celsius, "will slip away within the next decade...With this latest report, science has spoken yet again and with more clarity.

Time is not on our side…leaders must act. " The ABL face a land and governance struggle against the Canadian Government. This Incredible Hospital Robot Is Saving Lives. Also, I Hate It. Story. A dozen children make a suicide pact in Attawapiskat. 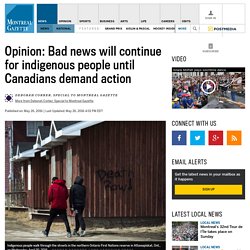 A house fire kills nine members of a family — three of them children under 5 — in Pikangikum. Two-thirds of all First Nation communities have been under at least one drinking water advisory over the past decade. Only four out of 10 young adults living on reserve finish high school, compared with nine out of 10 non-Aboriginal Canadians. Indigenous children are twice as likely to live in poverty as other kids. If you’re paying attention, the bad news seems endless. First Nations, Metis want say in UN declaration implementation. First Nations are calling for full partnership in resource development to address child poverty. 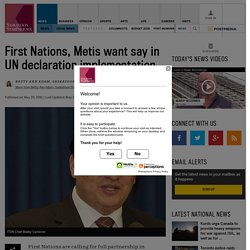 The Federation of Saskatchewan Indian Nations (FSIN) also called Thursday on all levels of government to address a recent finding that 69 per cent of children living on First Nations live in poverty. The high poverty rate reported this week by the Canadian Centre for Policy Alternatives “is a result of severe underfunding of our communities especially in the areas of education, child welfare and investments in community infrastructure,” FSIN Chief Bobby Cameron said. 2008 Aboriginal connectivity rates. Trudeau government eyeing NWT’s ‘collaborative consent’ model as part of UNDRIP implementation. Jorge Barrera APTN National News With Monday’s announcement on how it plans to implement the UN Declaration on the Rights of Indigenous Peoples (UNDRIP), it appears the Trudeau government is following a playbook laid out in a report by former Assembly of First Nations national chief Phil Fontaine that recommended Ottawa copy a “collaborative consent’” model developed in the Northwest Territories. 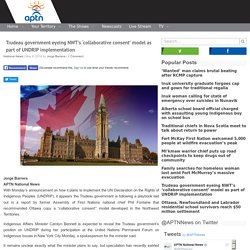 Indigenous Affairs Minister Carolyn Bennett is expected to reveal the Trudeau government’s position on UNDRIP during her participation at the United Nations Permanent Forum on Indigenous Issues in New York City Monday, a spokesperson for the minister said. Manitoba First Nations oppose government consultations with Métis. OTTAWA — Manitoba First Nations are demanding the federal government reopen an almost 20-year-old agreement on Treaty Land Entitlement, saying the government's decision to consult with the Manitoba Métis Federation before approving additions to reserves is a breach of the agreement. 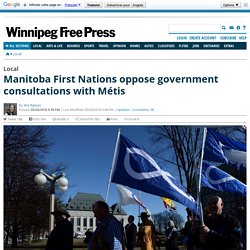 The demand is part of a growing feud between some Manitoba First Nations and the MMF, which have historically had a difficult relationship. The 1997 Treaty Land Entitlement Manitoba Framework Agreement set out that Manitoba First Nations were owed about 567,000 hectares of land that had not been properly distributed from treaties signed between 1871 and 1910. Another $190 million would be paid out in cash. Since then, only about one third of that land has been approved as First Nations identified and requested specific land, and the federal government set about approving it. 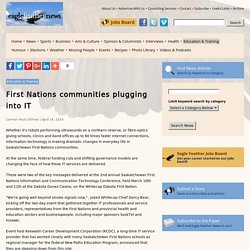 A home-grown solution to First Nations poverty. By Don Tapscott Mon., Nov. 4, 2013 Despite the federal government pumping billions of dollars into housing, education and health care on reserves throughout Canada, the standard of living of too many First Nations remains horrific, with rampant unemployment and substance abuse. 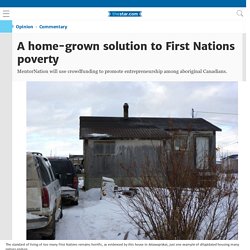 The Assembly of First Nations reports that a young person on a reserve is more likely to end up in jail than to graduate from high school. Five lessons from Iceland’s failed crowdsourced constitution experiment. Courtesy of Tanya Hart/Flickr Who should write the constitution of a democratic country and, indeed, any country? 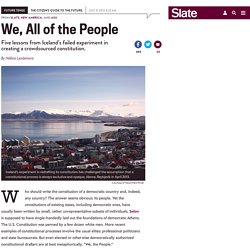 The answer seems obvious: its people. Yet the constitutions of existing states, including democratic ones, have usually been written by small, rather unrepresentative subsets of individuals. Solon is supposed to have single-handedly laid out the foundations of democratic Athens. The U.S. Cleaning up mercury a must in Grassy Narrows. By David Suzuki, and Faisal Moola Wed., June 1, 2016 Biologist Rachel Carson’s Silent Spring was published in 1962. 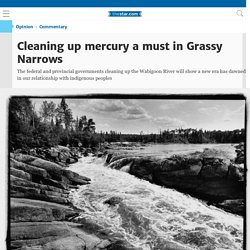 The book — about widespread agricultural pesticide use and how toxic chemicals like DDT were threatening insects, birds and other wildlife — garnered widespread acclaim and is heralded as a catalyst for the modern environmental movement. Aboriginal Peoples in Canada: First Nations People, Métis and Inuit. Highlights Aboriginal people – Diverse groups living across the country. 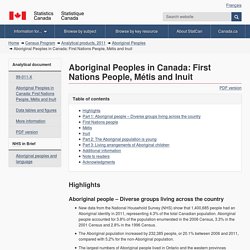 Spreeder. Aboriginal suicides to be addressed at UN gathering. Brandi Morin APTN National News The United Nations Permanent Forum on Indigenous Issues will talk about suicide next month. It’s a growing problem in Canada and around the world, Truth and Reconciliation Commissioner Wilton Littlechild told APTN National News on March 10 in Winnipeg. The suicide rate in First Nation communities in Canada is five to six times higher than that of the total population. The disparity is even higher among Inuit people at six to 11 times higher. Clean energy, tribal power. On an 800-hectare stretch of tribal land in southern Nevada, construction of a large-scale solar project is underway that will not only help power the City of Lights, but also shine a spotlight on how indigenous communities are reshaping the future of renewable energy.

The 250-megawatt Moapa Solar Project, located on the Moapa River Indian Reservation about 50 kilometres northeast of Las Vegas, is touted as the first large-scale solar project approved on tribal land in North America. The Moapa Band of Paiutes is leasing the land to solar module maker First Solar, which will design and build the project. The electricity the solar power plant produces will be sold to the Los Angeles Department of Water and Power as part of a 25-year purchase agreement.

When done, it will generate enough clean energy to power about 100,000 average homes. Remote control. Colville Lake, a First Nation community about 50 kilometres north of the Arctic Circle, was quiet for a few hours in late February when, for the first time, solar power kept the lights on and the furnaces running. For years, the settlement of about 160 people has been powered by noisy diesel generators, but a new hybrid energy system that combines solar and diesel power with energy storage began operating in December 2015.

By the end of February, Northwest Territories Power Corporation (NTPC) was able to switch the generators off for a few hours at a time. Reported Elsewhere. Government of Canada Investment Supports Green Energy Solutions in Remote First Nations. May 26, 2016 – Thunder Bay, ON – Federal Economic Development Initiative for Northern Ontario – FedNor The Honourable Navdeep Bains, Minister of Innovation, Science and Economic Development, and Minister responsible for FedNor, today announced an investment of $2,715,000 to create a renewable-energy micro-grid development company aimed at providing energy solutions for off-grid and remote First Nation communities.

The FedNor investment will enable NCC Development Corporation LP, with the assistance of Canadian Solar Solutions Inc., to develop the structure of the organization, as well as its operational and technical capacity to work directly with First Nations and to ensure long-term, sustainable revenues. NCC Development Corporation LP plans to roll out its renewable-energy solutions to off-grid and remote communities across Canada, many of which have diesel plants that are running at or near capacity.

In addition, NCC will pursue business on international markets. Quick Facts. The link between culture and health is vital for First Nations. By Jon McGavock Fri., May 27, 2016 Manitoba politician, author and musician Wab Kinew has been telling scientists and health care professionals for years that culture is medicine. Epidemics of obesity, diabetes, infectious diseases and suicide that plague First Nation children across Canada are complex and multi-faceted. Yet government solutions often focus on simplistic bio-medical approaches — when they address the crises at all — and too often ignore the cultural strategies proposed by indigenous leaders themselves, which address indigenous relationships with language, tradition and land.

Most non-indigenous people struggle with the concept that culture has healing potential, but several lines of scientific evidence support it. Quebec Cree youth head to Attawapiskat to deliver letters of hope after suicide spiral - Montreal.