David Unaipon. David Unaipon (1872-1967), preacher, author and inventor, was born on 28 September 1872 at the Point McLeay Mission, South Australia, fourth of nine children of James Ngunaitponi, evangelist, and his wife Nymbulda, both Yaraldi speakers from the lower Murray River region. 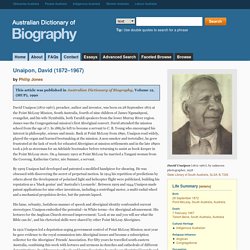 James was the Congregational mission's first Aboriginal convert. David attended the mission school from the age of 7. In 1885 he left to become a servant to C. B. Young who encouraged his interest in philosophy, science and music. By 1909 Unaipon had developed and patented a modified handpiece for shearing. On this day in history: David Unaipon born. ON 28 SEPTEMBER 1872, David Unaipon was born on a modest indigenous mission on the banks of South Australia’s Lake Alexandrina, 80km south-east of Adelaide. 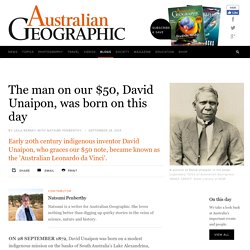 Today, the church at Point McLeay Mission (later named Raukkan) and Unaipon’s face both grace the Aussie $50 note. Beside them is Unaipon’s best-known invention – a modified design for shearing shears that changed the once circular blade to a straight one. It’s a design still used today. But, the shears were just one contribution among many. David was a polymath (someone with a wide or encyclopaedic knowledge).

Indeed, he was a man with a vision akin to Leonardo da Vinci's. Several experiments in vertical take-off had already been made, unbeknownst to Unaipon. David Unaipon. David Unaipon was born at Point McLeay Mission on 28 Sep 1872, the son of the evangelist, James Ngunaitponi, and Nymbulda. 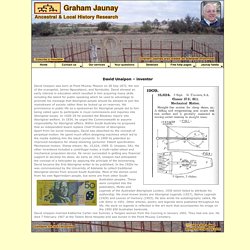 David showed an early interest in education which resulted in him acquiring many skills including the talent for public speaking which he used to advantage to promote his message that Aboriginal people should be allowed to join the mainstream of society rather than be locked up on reserves. His prominence in public life as a spokesman for Aboriginal people led to him being called upon to participate in royal commissions and inquiries into Aboriginal issues. In 1928–29 he assisted the Bleakley inquiry into Aboriginal welfare.

In 1934, he urged the Commonwealth to assume responsibility for Aboriginal affairs. Within South Australia he proposed that an independent board replace Chief Protector of Aborigines. These were compiled into the publication, Myths and Legends of the Australian Aboriginals London, 1930 which failed to attribute his authorship. David Unaipon, South Australian Aboriginal inventor - Coorong Country. Born at the Point McLeay Mission on the banks of Lake Alexandrina in the Coorong region of South Australia, Unaipon was the fourth of nine children of James and Nymbulda Ngunaitponi. 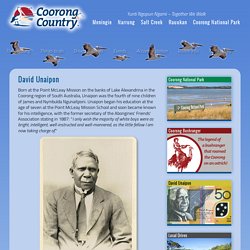 Unaipon began his education at the age of seven at the Point McLeay Mission School and soon became known for his intelligence, with the former secretary of the Aborigines' Friends' Association stating in 1887: "I only wish the majority of white boys were as bright, intelligent, well-instructed and well-mannered, as the little fellow I am now taking charge of. " Photo: Wikipedia Unaipon left school at 13 to work as a servant for C.B. Young in Adelaide where Young actively encouraged Unaipon's interest in literature, philosophy, science and music.

In 1890, he returned to Point Mcleay where he apprenticed to a bootmaker and was appointed as the mission organist. On 4 January 1902 he married Katherine Carter (née Sumner), a Tangane woman. Aboriginal people and the colony of NSW - Australian History, Colonisation. Aboriginal people and the colony of NSW is an excerpt from the documentary Rites of Passage the second episode of the two-part series entitled Rogue Nation, produced in 2009. 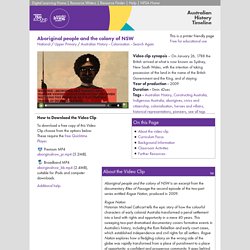 Rogue NationHistorian Michael Cathcart tells the epic story of how the colourful characters of early colonial Australia transformed a penal settlement into a land with rights and opportunity in a mere 40 years. This sweeping two-part dramatised documentary covers formative events in Australia’s history, including the Rum Rebellion and early court cases, which established independence and civil rights for all settlers. The Australian Directory of School Activities, Excursions & Accommodation.

1788 : Waruwi. Warning: This resource may contain references to Aboriginal and Torres Strait Islander people who may have passed away. 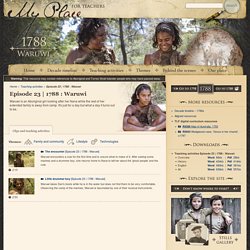 Waruwi is an Aboriginal girl looking after her Nana while the rest of her extended family is away from camp. It's just for a day but what a day it turns out to be. Matthew Flinders' 1814 General Chart. The first complete map of Australia Lieutenant Matthew Flinders was the cartographer of the first complete map of Australia and the first person to circumnavigate the continent and advocate the name ‘Australia’. 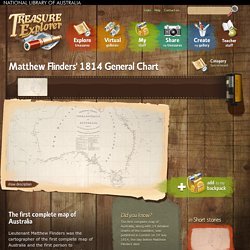 In 1802, Flinders set out on his circumnavigation of Australia in the Investigator. It was a monumental undertaking. In 1798, Finders and George Bass had sailed around Van Diemen‘s Land and proved it was an island. » Week 34: Aboriginal Perspectives » Bound for South Australia. This week Colonel Light and his crew continue to search for sources of fresh water. 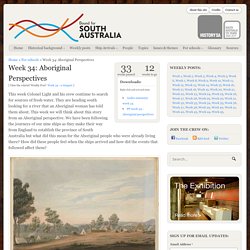 They are heading south looking for a river that an Aboriginal woman has told them about. This week we will think about this story from an Aboriginal perspective. Bungaree: the First Australian. Matthew Flinders' 1814 General Chart. Explorers-InformationforTeachers. The Ara Irititja Project - About Ara Irititja - Collection Management System. Sharing Stories. Splash.abc.net. Overview Date first broadcast: 2005 Imagine leaving your home and travelling back over 150 years to live and work on an outback farm. 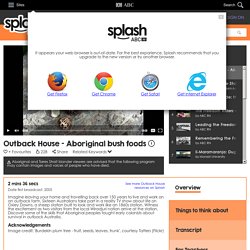 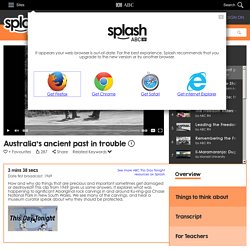 Chipped into this soft sandstone - some of the only clues we have of the life, art and religion of the Aborigines who lived around Sydney before the settlers wiped them out. Hundreds or thousands of years old, these carvings - nobody knows. Aborigines have lived here for at least 35,000 years. Burrup peninsula rock art map. Ancient Stories by Mrs Roberts. "rock art" "western australia" Indigenous Science Education. Ngapartji. Sharing Our Stories books and ibooks - Sharing Stories Foundation.