The People's History: The Finders Cult. In 1987 the New York Times ran a story about a little known cult called “The Finders”. 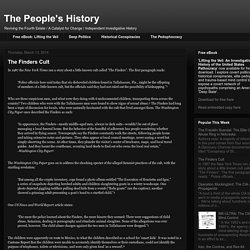 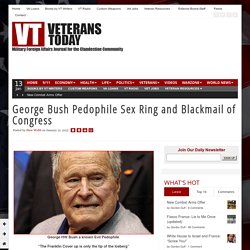 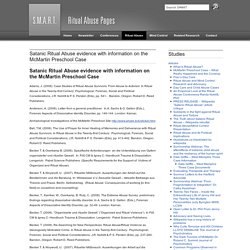 Case Studies of Ritual Abuse Survivors: From Abuse to Activism. In Ritual Abuse in the Twenty-first Century: Psychological, Forensic, Social and Political Considerations, J.R. A List of Members of Parliament convicted of sex offences. .Agent of Labour MP Chris Bryant, Mr Stephen Carnell is jailed for collecting 12,000 pictures of ‘the most serious child pornography police have seen’ while his boss Chris Bryant poses in his pants on the Internet to advertise himself for casual gay sex encounters. 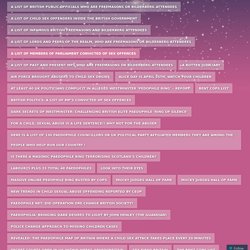 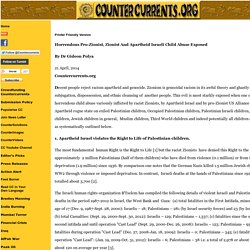 In a global study of violence against children, the child welfare agency UNICEF reveals that one fifth of all murder victims are children and adolescents under age 20. Homicide is the leading cause of death among boys and young men aged 10 to 19 in Latin American countries including Venezuela, Colombia, Panama and Brazil. 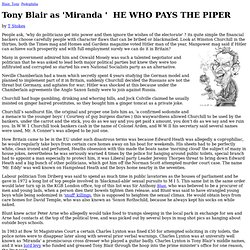 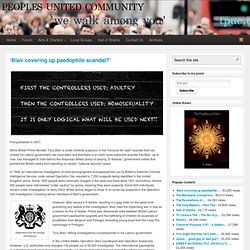 While British Prime Minister Tony Blair is under criminal suspicion in the "honours-for-cash" scandal that has rocked his Labour government, we have been told that there is an even more explosive scandal that Blair, up to now, has managed to hide behind the draconian British policy of issuing "D-Notices," government orders that prohibit the British media from reporting on certain "national security" cases. In 1999, an international investigation of child pornographers and paedophiles run by Britain's National Criminal Intelligence Service, code named Operation Ore, resulted in 7,250 suspects being identified in the United Kingdom alone. Italian mass killer 'was servant of Satanic sect' Aangirfan: DEMMINK, HEROIN, PEDOPHILE RINGS. 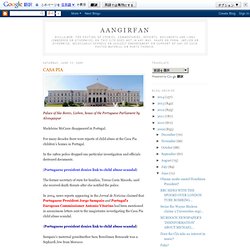 For many decades there were reports of child abuse at the Casa Pia children's homes in Portugal. In the 1980s police dropped one particular investigation and officials destroyed documents. (Portuguese president denies link to child abuse scandal) The former secretary of state for families, Teresa Costa Macedo, said she received death threats after she notified the police. In 2004, news reports appearing in the Jornal de Noticias claimed that Portuguese President Jorge Sampaio and Portugal’s European Commissioner Antonio Vitorino had been mentioned in anonymous letters sent to the magistrates investigating the Casa Pia child abuse scandal.

The tap: Jose Manuel Barroso is holding Madeleine McCann. Cliff Richard Paedo Shock-Horror Hits Jewknighted Kingdom. Curiosity was growing to boiling point in the blogisphere and website world in the UK about the identity of the mysterious famous popsinger with a string of hits who is under investigation for a abusing a ten year old boy way back in the days of Savilian glamour when the Jewish music business and freemasonary monarchic establishment was packed with paedophiles all rearing to change Anglo-Saxon and Celtic British society from the boring old days of white Christian morality, patriotism, safe streets and ancient cultural roots to bring in the era of swing, mass third world immigration ‘enrichment’, permissivenes and Jewish sexual, Marxist values. 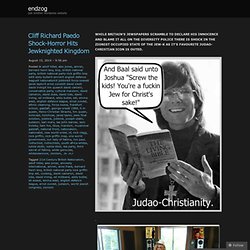 In quiet corners of English pubs all sorts of names of the greats were mentioned; Slick Shagger, Spliff Pilchard, Small Mcrarity, Rank Skyfeld, Merry Arsden. Savile and the 9th Circle ( Must See ) UK Pedophile Scandal–63 links to Mainstream Sources. Tony Blair, Mossad, Jill Dando, Cliff Richard, Paul Condon and the VIP child-abuse scandal. In April 1999, BBC presenter Jill Dando was shot in the head at point-blank range on her Fulham doorstep. To this day the case remains unsolved. Various theories about her assassination have emerged over the years, the most ridiculous being that she was killed by Serb dissidents.

Barry George, an innocent man, was imprisoned for 8 years and denied compensation when he was eventually released. There have been many (deliberate) procedural mistakes made by the Met Police. So who really killed Jill Dando? JUSTICE DENIED: Jill Dando, Princess Diana, Centrepoint, VIP child-abuse, Cliff Richard, Pervs at the Palace and the Jimmy Savile connection. The mysterious case of the death of Princess Diana has never been fully solved. Various theories have emerged over the years, the most popular being that she was murdered by Mi6 because she was planning to marry Dodi Fayed, the Egyptian son of Harrods owner Mohamed Al-Fayed. A more likely theory is that Diana had knowledge of the powerful VIP paedophile ring linked to the UK Government, the BBC and the Royal Family that has been operating in the UK for over 50 years.

Could this knowledge have led to her death? Quite possibly, yes. You won't believe who is on this list!!